The Senate President spoke candidly with Dan Haggerty about politics, compromise and his concerns for the future. 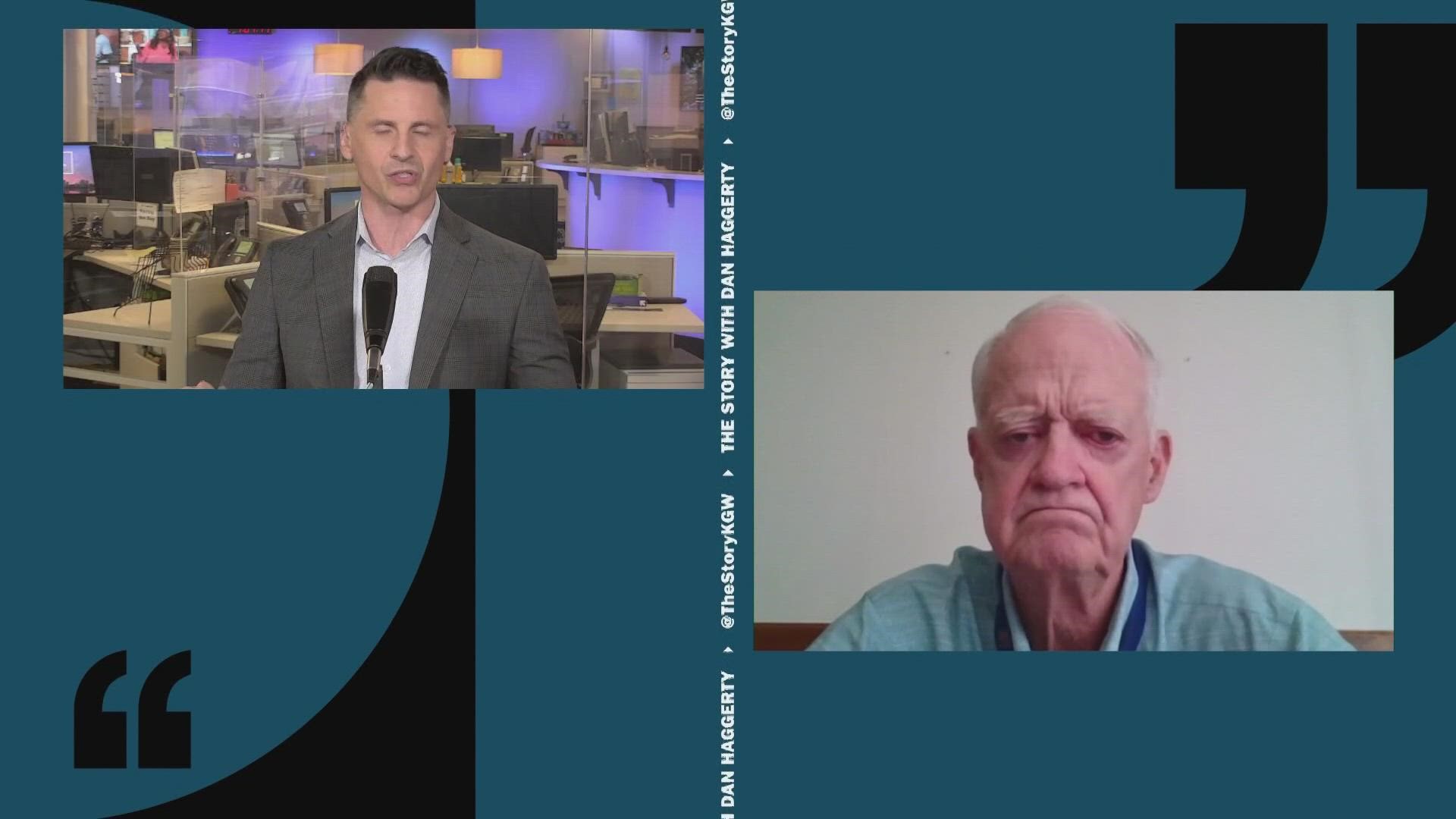 The Democrat has been serving in elected office since 1974 and has led the Oregon Senate since 2003. At 78 years old, he's seen a lot of Oregon politics.

Sen. Courtney reached out to KGW, offering an interview about the 2021 legislative session. What followed was a wide-ranging, hour-long interview in which Courtney spoke candidly about his thoughts on the state of politics in Oregon and the United States, the legislative session, the pandemic and more. Portions have been edited for length and clarity.

On the 2021 legislative session

Dan Haggerty: Being through the session, it's got to be relieving to have that off your plate.

Peter Courtney: I was much more tired than I realized. It's one of those sessions— I've had so many — I will never forget because going in, I didn't think we were going to be able to make it. I thought we couldn't hold on, but we were able to hang on. So I think I'm grateful and blessed. I'm very tired as are members. So it was a really draining difficult session.

I'm grateful that we got through the session. We got a good budget. We got some great bills passed because I never would have dreamed we could have done either one back in January and February.

On the 'end' of the pandemic

DH:  I wanted to get your sense of how the session ended. If you feel like you're on a good foot, moving forward with the people in that building and the unknown future of the state and protocols and all of that stuff is as we head into this hopefully post-pandemic world.

PC: I don't think we realized yet what happened to us, we simply think we do. And we're so grateful because now we can actually get together.

A million people have died of the virus plus. And the three biggest contributors to that were India, I think Brazil is one, and the U.S., and of all those three, the U.S. had the greatest number of deaths, which staggered me. I remember the scenes of what was going on in India, in Brazil. And I think that the theory is well, okay, we've lost those memories — a number of people, tragically, over 600,000. I don't think we understand what that virus did to people who got it and then supposedly recovered from it. I do think if you look at anything that's that grave, it leaves lasting effects in the body.

They're going to show up throughout that person's life sometimes in ways that are unimaginable. So saying we're over the virus was extremely misleading.

On the state of the country

DH: Where do you think we are headed?

PC: I do think we will not resolve the divisions in our country in a way that we think you can resolve things. They will linger and linger and linger. And I sort of look to Europe, and how you think of the Frances and the Spains and the Englands, all of whom I think I can say were world powers at one time. They still exist as a country, there's still freedom, but they're no longer powerful, they don't have one party. They have multiple parties. They struggle. They get by. I think that's where I see the country going. I don't see the spectacular nature of our culture, the spectacular nature of our business community, the spectacular nature of the arts and entertainment.

It won't be the great melting pot that we think it is, it really never has been, but I don't see us falling apart. But we do not have the kind of simplistic society that maybe a China has, the Scandinavians have, in terms of both people, races that are there, and how they approach things. We're too complicated for that.

Later asked to clarify whether he saw the "melting pot" of America as a negative, Courtney expanded.

The society we have today seems to be very frightened. There's no longer a collective. I mean, I'm here, you're there. I've never felt that before. I never was aware growing up of some of the divisions that apparently were all around me that I should have been aware of.

I think a melting pot is a great thought and a great idea. And our country can't survive without it. I'm going to tell you that right here and now, but I just don't know how much of it, how many of us really wanted to understand what it takes to do that and how hard of work it requires.

On politics and party divide

PC: The people, the kind of people who are elected legislature today and the roles they play are much different than in 1981. I love the legislative process. I love the institution, but the people who now play this game, play it much differently than before. And I think, it really is for me sad, but that's the times that made it that way.

We're different today. We don't pay dues today. We don't think we have to pay dues. We think it was reelected. Our ideas are the best. That our ideas should prevail. I should be able to talk as much as I want. Whenever is easy. You don't defer to anyone who's been here. In fact, the bad thing is to have been in an area for a long while, long periods, that makes you negative, that makes you part of the problem.

I don't know if I'm pessimistic as much as I'm realistic. People don't get along. Compromise is no longer considered valuable.

The value of working, of understanding that you cannot be a public official if you do not have the ability to talk and work with and painfully compromise with someone who thinks very differently than you. That is no longer considered a value. The fact is, that is not rewarded. That is not rewarded.

On Democrats and redistricting

DH: Let's get into how you think the whole redistricting thing is going to go,
and if you think there's any possibility this isn't going to go to the secretary of state or the courts. Do you think that the lawmakers are going to be able to put something together here that that is effective?

PC: This is my fifth redistricting, Dan, and I've only known one that was successful. That was the one we did 10 years ago. I can't tell you whether this group is up or not. I know that the Senate side, the committee I've put together, I think is really outstanding. Some of that is luck. You appoint people and your hope is really outstanding. I know they're committed.

DH: Why didn't you make it equal on both sides?

PC: The truth of the matter is, I simply looked at the cards and the numbers were such on my side. I was concerned that if I made it equal, the Democrats would dig in over here and decide not to play and I'll be honest, I made a partisan decision there. And I second guess myself, even to this day, because it was in my nature to [appoint a bipartisan commission], but I didn't do it. And I thought basically the [Democrats] that we had today were such that they wouldn't accept that. They'd start out in a very defensive position saying, well, we're going to go to the secretary of state or something. They wouldn't have the belief in it. Now, the Republicans, on the other hand, they had gotten used to my approach of being bipartisan. So I took a risk and I didn't make it equal. I wanted to be sure that [Democrats] were willing to try to redistrict and not just think they could go to the secretary of state. It was their job.

DH: It says a little bit about how you feel the Democrats would have handled something that was more bipartisan. The fact that you didn't believe that they would be willing to play ball if it was the room was a little bit more fair. What's that say?

PC: The party has itself become divided. We are now experiencing the same thing in our party as the Republicans, some time ago, the Tea Party situation. We have that going on in our party.

I think Biden said it best, "My party is divided, but it's still rational." And I think at every level, the Democratic Party is divided now. It is struggling. Between progressives and moderate Democrats. I do think that it's different, the locker room is different today than it was before.

On a changing Oregon

DH: I'm wondering what your take is on how bad the relationships actually are with our elected officials in Salem.

PC: I just visited one of my sons in Montana and he has three children. And I'm looking at [my grandchildren] and I told him, don't leave Montana. I have this view that it's more simple there, and people pull for each other more there, and that may be too simplistic.

Do I worry about the grandchildren? I'm hopeful that there'll be just enough civilization left in this country, however you want to describe it, and they'll be able to survive there and do have their lives in a halfway decent way. And I, right now, I don't see the interest on the part of people to return to fundamentals in terms of understanding government and how important it is. But most importantly, how fragile it is. We take things for granted. We take all kinds of things for granted, and then when things really fall apart, there's nothing we can do about it.

I moved here in 1969. Oregon was a much different place than it is today. That's not a poor statement I made, you have no idea of Salem, where it was then where it is now.

I always said, given its size, there's no [city] comparable to Portland, Oregon. It's the greatest city in the world in terms of its size, comparably. Tremendously good decisions were made by former city councils and mayors. It's extraordinary. I don't think [you] could say, I don't know how long [your family has] been here, but I'm not sure that [you] could say it's the same thing today as it was when you moved here. And it makes me sad.

I worry about the fact that there is, I don't want to say a real civil war, but there is strife with people, really liking people and wanting to work out problems. I don't sense it. And that would never have been said about Portland not too long ago. I worry about my own community.