The Meighan Cordie investigation: From missing person to mysterious death

Jennifer Weathers, 50, reported her daughter Meighan Cordie, 27, missing the morning after a wedding on Aug. 18 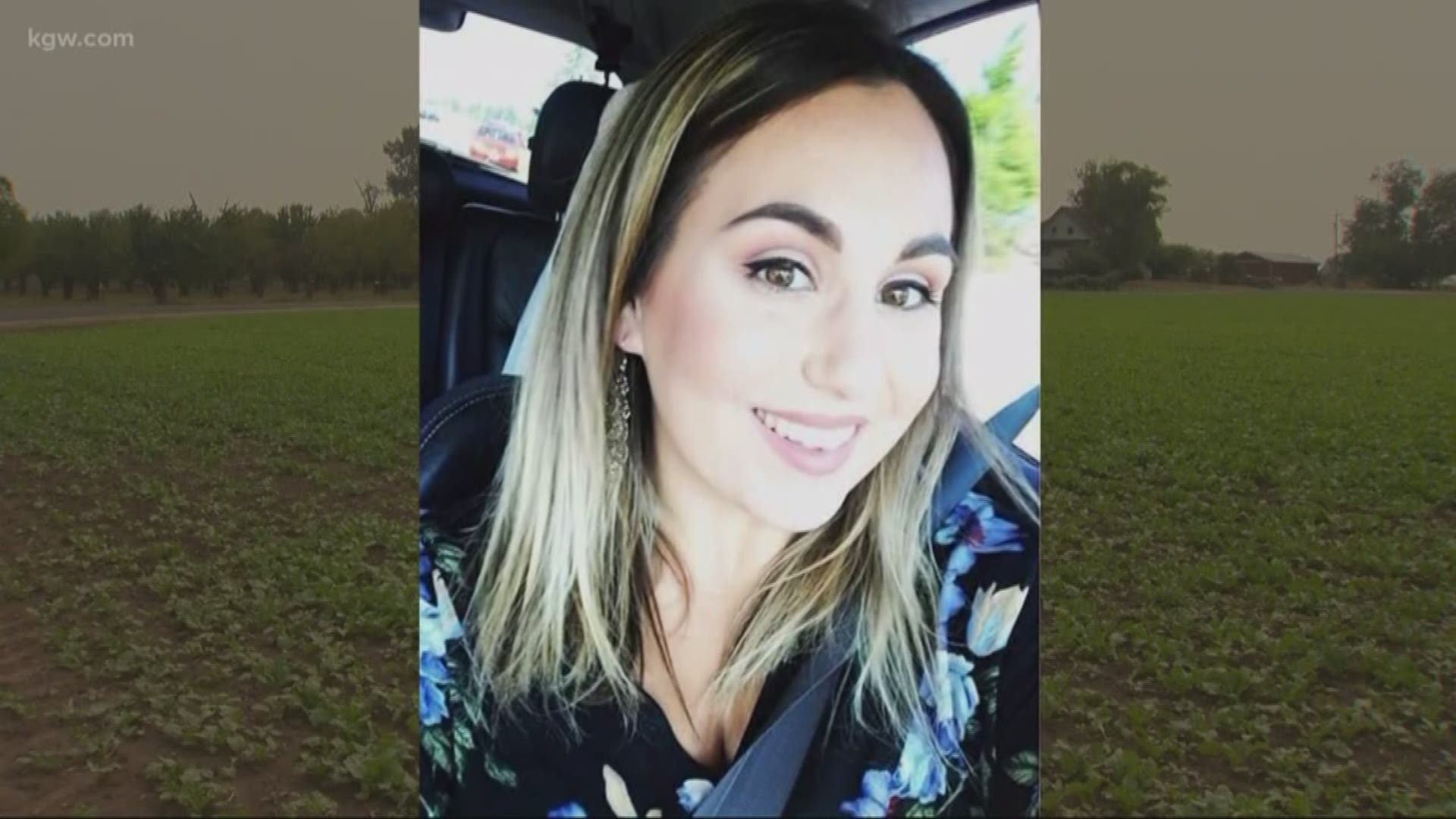 MCMINNVILLE, Ore — When hundreds of volunteers scoured the rural community of Grand Island for 27-year-old Meighan Cordie, searching the woods, patrolling the Willamette River and flying over farmland, they had no way of knowing the missing Salem woman was already dead, hidden down an embankment nine miles away.

But according to investigators, at least one person knew the massive search would be fruitless — Cordie's mother.

Jennifer Weathers, 50, reported Cordie missing the morning after a wedding on Aug. 18. She told detectives her daughter jumped out her car and walked away, leaving behind her shoes, cell phone and 3-year-old daughter.

A month-long investigation ensued after Cordie was found dead near Dayton on Aug. 23.

At a Sept. 27 press conference, Yamhill County District Attorney Brad Berry made two things clear: Cordie's death had been ruled an accident, but her mother had not been honest about the night Cordie disappeared.

In a memo he penned stating his intention to decline prosecution, Berry outlined the hours and days before, during and after Cordie's death:

The day before the wedding, Weathers and Cordie argued about who would be driving to the reception.

Cordie didn't want to drive because she wanted to drink. Weathers countered that Cordie's daughter Gia would most likely get fussy, and she would be forced to leave before she wanted to.

The daughter of Clackamas Fire Captain Tony Cordie, Meighan Cordie lived in the Salem area and worked as a licensed esthetician at a spa in Tigard. Her Instagram feed prominently features Gia — hugging Minnie Mouse on a trip to Disneyland, frowning in her car seat and splayed out in the grass at the wedding.

"I love this girl," Cordie wrote in the caption hours before her death.

Weathers, long divorced from Cordie's father, lives in King City. Cordie planned to stay with her mother the night of the wedding.

Berry said the mother and daughter reportedly had a "difficult relationship."

The family attended a wedding at Heiser Farms, a quiet venue and pumpkin patch tucked in the Grand Island countryside. Among the hanging cafe lights and picnic tables, the mother and daughter drank throughout the night.

Multiple guests told investigators that Weathers became intoxicated to the point where she should not have been driving.

Gia got tired and fussy as the night wore on, and the family left shortly after 10 p.m.

While walking to her car, Weathers snapped at Cordie, "I told you this would happen."

Weathers told investigators the pair argued in the car as they drove on a rural road away from the wedding venue.

She said the fight escalated until Cordie demanded to be let out of the car. Weathers said she braked to 5 mph and Cordie jumped out of the backseat.

It was dark, with no street lights or houses. She said she turned the car around, but Cordie had already disappeared into the darkness.

The next morning, Weathers called the non-emergency line. Her daughter was due at work in 10 minutes, she told the dispatcher, and she was getting worried.

"I drove around for two hours this morning looking for where she got out of the car," Weathers said.

She added that she had checked the hospitals and jails to no avail.

The dispatcher asked if she wanted to report Cordie as a missing person.

"Yeah, I think so," she replied, describing her daughter's wedding attire: a short-sleeved pantsuit with bright blue flowers.

Family, friends and Yamhill County Sheriff's deputies spent the rest of the day searching the Grand Island area for Cordie.

Yamhill County Search and Rescue was activated the morning of Monday, Aug. 22, along with air and marine patrol support.

Deputies and roughly 300 volunteers, many of whom were professional firefighters associated with Cordie's father, scoured the area over the next few days, looking for any sign of her dyed blonde hair and floral pantsuit.

Meanwhile, investigators were beginning to suspect that something was not right.

Weathers account of the night her daughter went missing "did not make a lot of sense," Berry said.

Detectives found a clump of Weathers' hair in the front seat of her car. Although she initially skirted around the physical nature of the argument with her daughter, she later admitted to detectives that Cordie had pulled her hair.

Investigators were confused as to why the hair, along with Cordie's phone and shoes, was found in the front seat when Weathers had described her daughter jumping out of the back seat of the car.

They kept pressing Weathers and asked her to submit to a polygraph test to eliminate her as a suspect. She agreed, but when she arrived to take the test the next morning, she disclosed that she'd taken a muscle relaxer the night before.

"I won't go into details here, but that was disconcerting at best," Berry said.

Investigators rescheduled the polygraph for that afternoon. Berry said the results of the test were inconclusive and a post-test interview did not reveal a reason why.

Weathers agreed to take another test, however, she canceled her appointment with the polygraph examiner and never rescheduled.

Later that day, the sheriff's office announced that their search of Grand Island was complete and suspended the search for Cordie.

The next morning, joggers passing an embankment just off Highway 18 near Dayton spotted what looked like the body of a woman and called 911.

Lying 20 feet below the road, behind a guardrail and down a steep hill, the woman's blonde hair and bright blue, flowered pantsuit led deputies to conclude they'd found the missing wedding guest.

It also raised a nagging question: Why was her body found nine miles from where her mother said she was last seen?

Family members pleaded for anyone with information to come forward.

But the next day, an autopsy by the Oregon State Medical Examiner's office told a story significantly different from the one Weathers told detectives.

Cordie's feet didn't show signs of having walked nine miles without shoes. Examiners ruled she had died from blunt force trauma. Two of her vertebrae were broken and she suffered head trauma. But the immediate cause of death had been an aortic separation, which would have caused immediate loss of blood pressure and internal bleeding.

Her injuries were not consistent with having jumped out of a low-speed cruising car or from being hit by a car, Berry said.

Rather, Cordie's injuries indicated she fell or jumped from the vehicle traveling at a higher speed.

Berry speculated that Cordie exited the car twice during the drive home that night. The first time was consistent with cell phone records and the location that Weathers identified to investigators.

Detectives believe Cordie left the front seat of the car in anger but Weathers was able to convince her to get back into the backseat.

This would explain why her phone and shoes were still in the front of the car.

As the mother and daughter continued toward King City, investigators believe another argument broke out. And Weathers either missed the correct turn to go home or got lost.

Then on a curved portion of Foster Road, where vehicles typically accelerate to get onto the highway, it's believed Cordie opened the back door and either lost her balance or purposely leaped from the car.

She struck the guardrail and roadway, which killed her instantly, and rolled down the embankment.

It doesn't look like she was pushed out, Berry said.

Statements given by Gia support this timeline.

Tragic accident, not a crime

Berry said that it appears Weathers kept driving after Cordie exited the vehicle, did not call police right away and was not honest with investigators about where her daughter was last seen.

As "tragic" as the case is, Berry said the issue before him was whether criminal activity led to Cordie's death.

He said investigators found no evidence that was the case.

"Clearly, leaving her daughter there —I think if we are talking right versus wrong — I don't have a problem saying that it's hard for me to fathom that someone could do that," he said. "But it doesn't mean I have a crime."

Weathers was charged with DUI and reckless endangerment for driving drunk with her granddaughter in the car the night of Cordie's death.

At the time of the Sept. 27 press conference, Berry said Weathers was not in custody and not cooperating with authorities.

She appeared for arraignment Oct. 3 in Yamhill County Circuit Court. During the hearing, she was ordered to have no contact with her ex-husband or Gia, who is staying with her father, Cordie's boyfriend.

Weathers' attorney Walter Todd took issue with Berry's claims that his client has been uncooperative.

Weathers spoke to multiple investigators, voluntarily took a polygraph test and even volunteer to give a DNA swab, Todd said.

But most of all, Todd stressed, the misdemeanor charges against Weathers have nothing to do with her daughter's death.

Cordie jumped out the car, and her mother was in no way responsible for her death, he said.

"She really is devastated," Todd said. "She loved her daughter."

Her daughter's death, media coverage and cruel speculation on social media have all been a "terrible tragedy," he said.

Weathers was released from custody and is scheduled to appear in court Oct. 30. According to court records, she filed to enter a DUI diversion program designed for first-time offenders.

Family and friends held a short vigil and prayer for Cordie in Dayton on Aug. 24. A private memorial service was held three days later in Keizer.