The business students are among 16 in the world that will help shape how businesses implement this digital ledger technology. 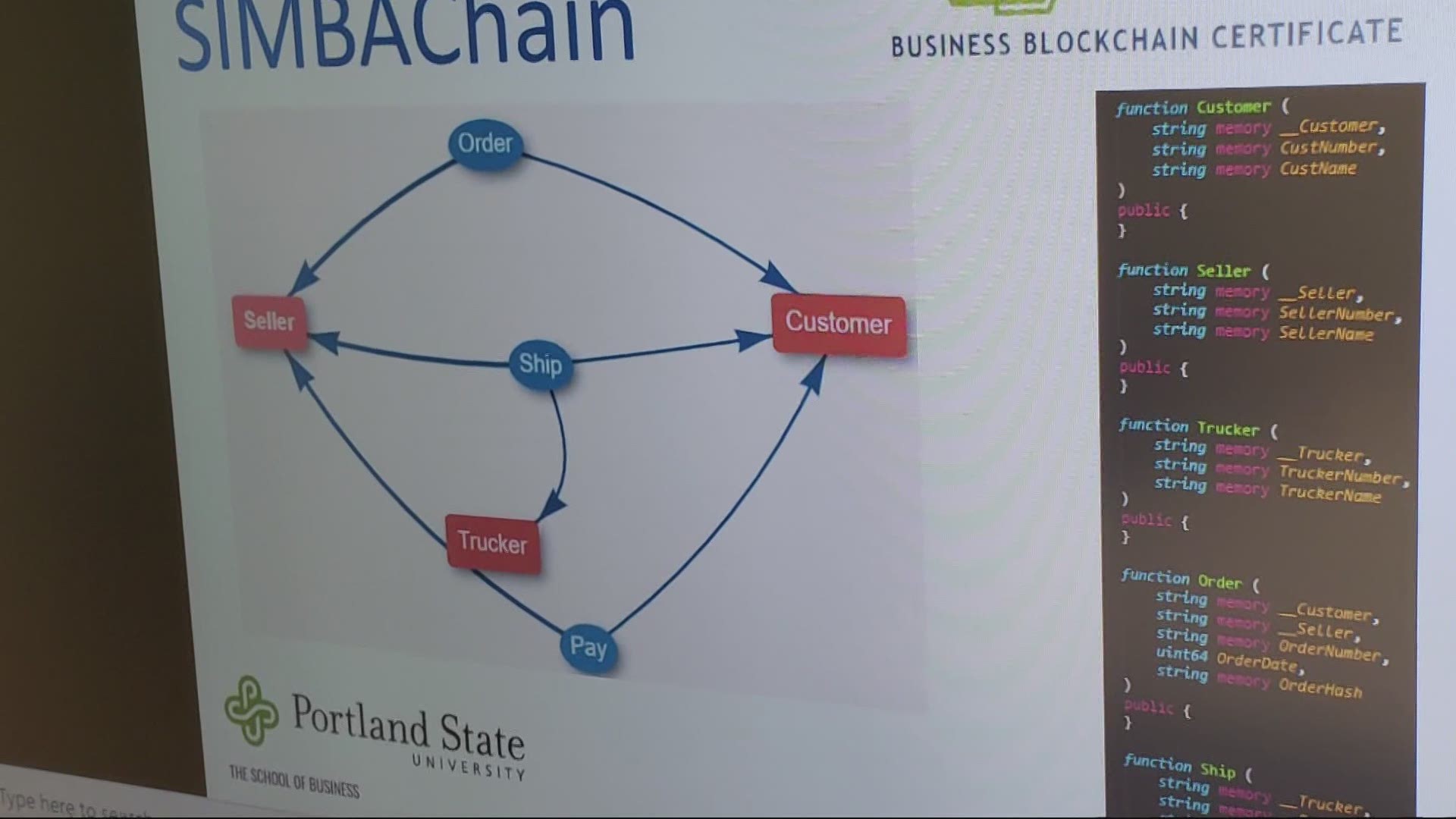 PORTLAND, Ore — KGW's ongoing series "What's Next?" looks at innovation, technology and work in a post-COVID world. A huge part of the future is blockchain technology. Think of blockchain as a permanent digital list of data: who, when, where, how much.

When data needs to be entered, it's sent to a network of computers that could be physically spread across the globe, to validate it. The information is then saved into a new block of data on each of those computers and linked with other blocks of information to create a chain, that once verified, is permanent and unchangeable. If a hacker tries to alter or delete info in one computer, it won't match the blockchain in the others and won't go through.

Bitcoin is the most famous to use it, assigning real people an ID number that's permanently attached to each transaction, with a tracked date and amount bought or sold. But blockchain uses are unlimited: votes in an election, event tickets, product inventories, real estate, medical records, etc. Think of it for safety and traceability in food. For example, a crate of lettuce gets it's own bar code that's scanned when it's picked in the field, and the information on the farm, address, date and time, goes into a blockchain.

That crate of lettuce is then scanned at each stop along the way in trucks and refrigerators until the customer buys it. Say a food borne illness like E. coli pops up, the blockchain will show where & when it came from and when it tested positive, in literal seconds versus the average now of 7 days where all produce from that farm has to be recalled and thrown out.

"Businesses are really starting to see the value, so we are in this explosion. We're right in the beginning," said Portland State accounting professor Kristi Yuthas. "Covid had a lot to do with that because everyone started digitalizing before they thought they were going to, so it really advanced things quickly so now so many companies are recognizing they really need these skills and nobody has them yet."

It's why Proffesor Yuthas, and head of business management, Dr. Stanton Heister, started the university's Business Blockchain Certificate program. It's a year's worth of classes for upper division business and graduate students to learn -- not how to code or build blockchain -- but how businesses could use it. PSU is one of only 2 schools in the country doing this. And grad student Riley Fay..."It clicked. I realized how important this is, how crazy this technology is," is in the program.

"The technology is secure, so our privacy is secure. Because I think that's so important right now when we're practically giving our data away to every company that comes around," Fay said.

Credit: KGW
Riley Fay, Maurice Pam and Rob Ripley (not pictured) were chosen from Portland State University to be among 16 student fellows in a global standards group for blockchain technology.

She and fellow PSU blockchain certificate classmates Maurice Pam and Rob Ripley, applied and were chosen to be among just 16 students in the world for the Global Standards Mapping Initiative. The Global Blockchain Business Council, a nonprofit industry association advances adoption of blockchain technology.

Blockchain is so new, there's no legislation governing it. Nothing is standardized yet, not global taxation, real money vs crypto, or how digital identities are created. These students will be researching the standards that are out there to determine which ones work the best and developing a list of their own.

Dr. Stanton Heister says it's a big deal and is very proud of his students, "We were happy, we were really happy in fact there are only two universities in the states that have students in this program. When our students graduate, they need to understand how all this technology is impacting their industry."

"I'm hoping I can develop skills I'll be able to use, even if I don't end up with a blockchain company, I could introduce other companies to blockchain that could use it," Fay said.

With Blockchain being the most sought after hard skill companies want most in a new hire, according to LinkedIn data, Riley and her colleagues are on their way to a bright future. So why is Portland State so far ahead of the game in developing this certificate program? "Portland has a lot of advantages when it comes to blockchain," Prof. Yuthas said. "We're very tech-forward, we have some advocates in the legislature that care about blockchain and understand the value of it."