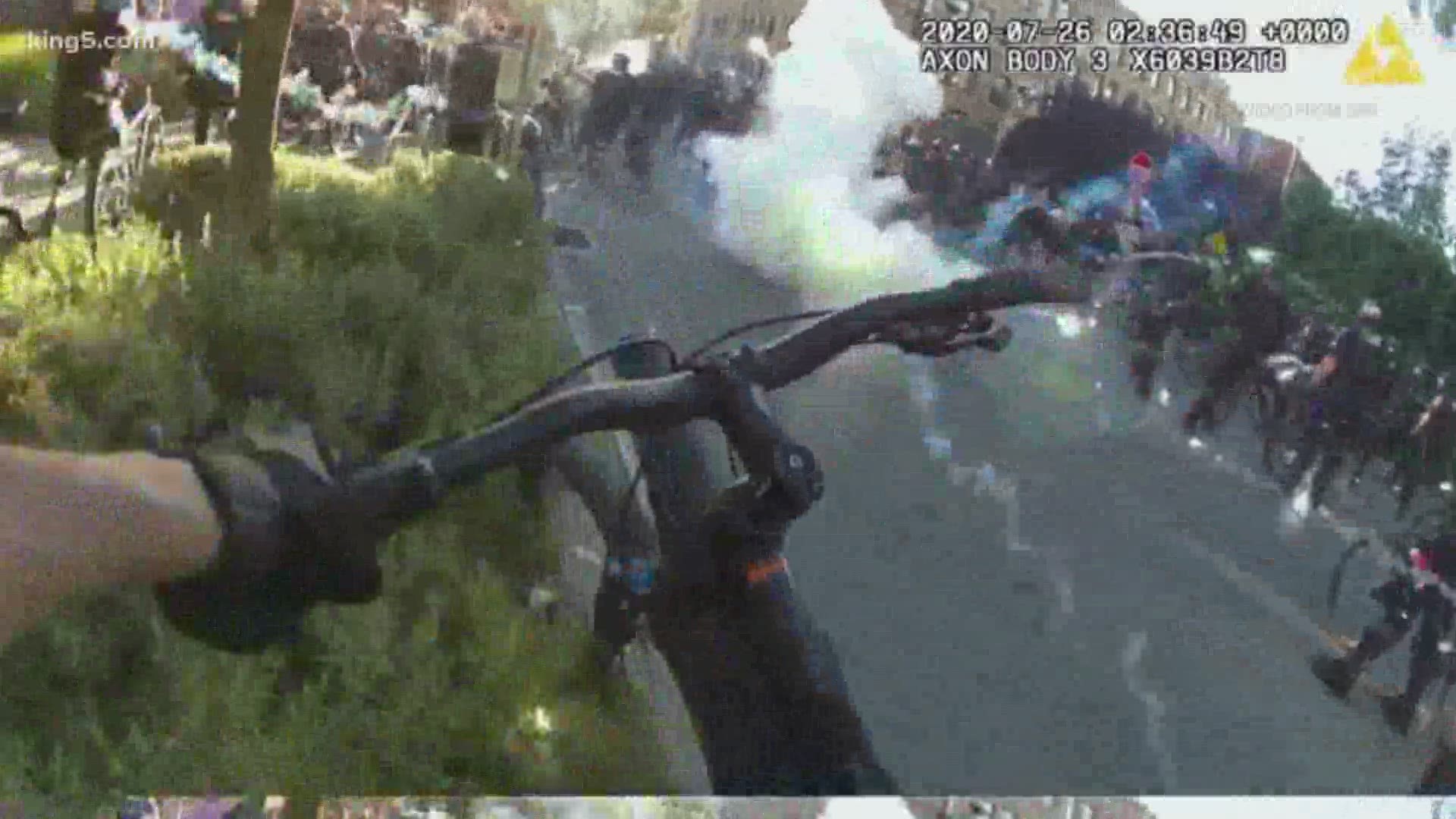 SEATTLE — Protests in Seattle remained peaceful Sunday after a violent "riot" on Saturday led to dozens of arrests.

The protests picked up new momentum in response to the death of George Floyd and federal agents being placed in Seattle on standby.

Washington Governor Jay Inslee and Seattle leaders, such as Mayor Jenny Durkan and Police Chief Carmen Best, voiced opposition to the federal agents being in the city for fear it could escalate the protests.

Protesters marched in support of the Black Lives Matter movement and demanded that the Seattle Police Department be defunded by 50%, a similar call across the country.

Ahead of this weekend's protests, a federal judge Friday night temporarily blocked the Seattle City Council's controversial ban on tear gas, pepper spray and other crowd control measures from taking effect in Seattle this weekend.

The temporary restraining order cleared the way for law enforcement to use crowd control measures during this weekend's protests should they be needed.

Dozens of protesters remain on Capitol Hill, but the crowd has begun to dissipate from earlier in the evening. 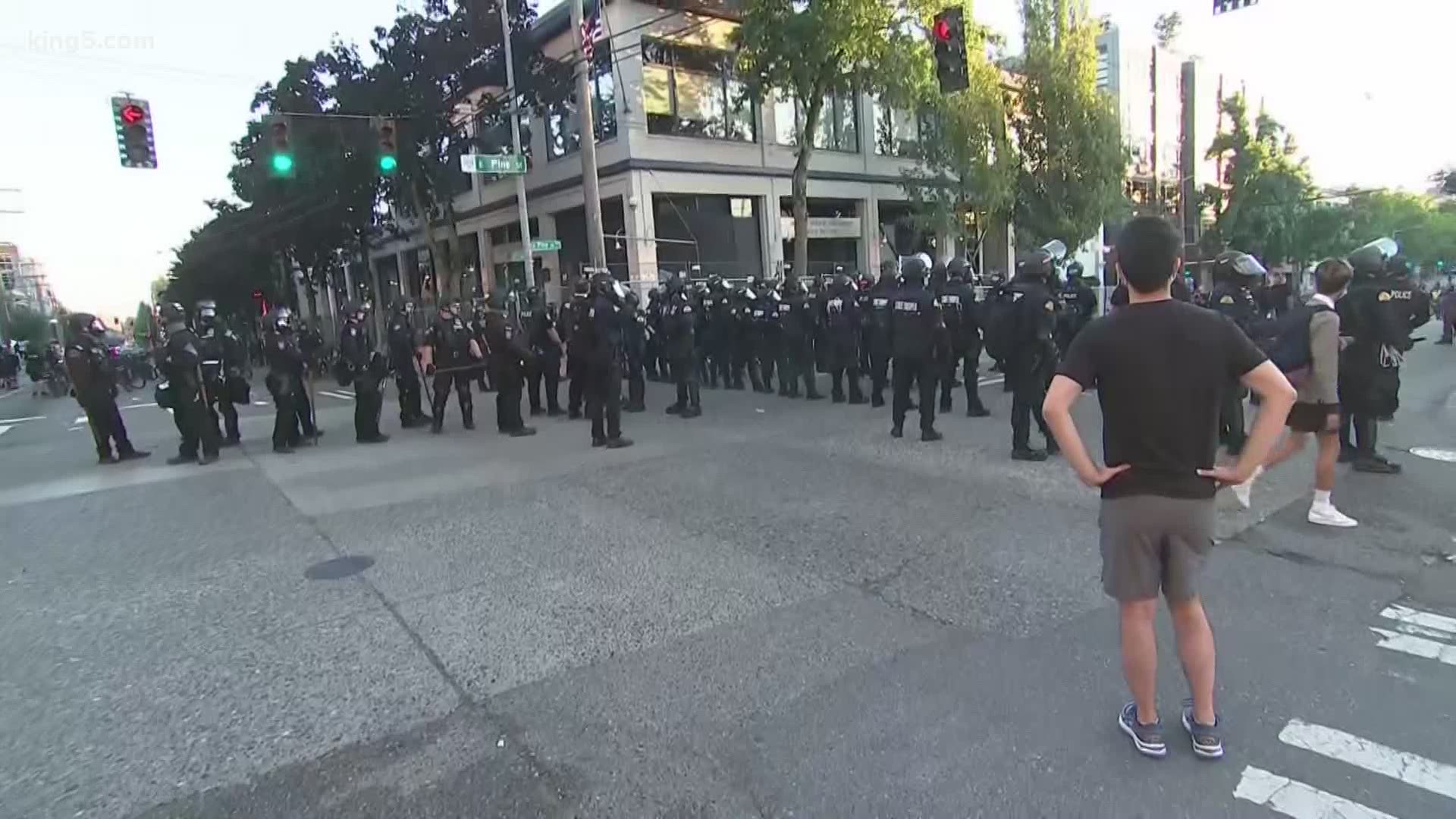 Seattle police move protesters away from the East Precinct after hundreds took over the intersection of 12th Avenue and Pine Street.

The protesters continue to block streets near Broadway and Pine Street.

Protests at this point have been calm and non-violent.

Keep up to date with road blocks and closures here.

Hundreds of protesters once again surround the #EastPrecinct in #CapitolHill. Not a single Seattle Police Officer in area @KING5Seattle pic.twitter.com/rIMFjj0grm

The Seattle Police Department said that 59 officers were injured and 47 people were arrested by the end of Saturday's protests.

SPD said officers were hit with explosives, rocks, bottles and wood. One officer has a torn meniscus.

Officers are recovering from protests yesterday where they were struck with explosives, rocks, bottles, and wood.

One officer was hospitalized.

Forty-seven people were arrested for assaults on officers, failure to disperse and obstruction.

Seattle police released some body cam footage of officers being hit with things during protests. They have not released footage of arrests.

The Seattle Fire Department tweeted that three fires were set at different locations in Seattle during the protests. One fire occurred at a construction site where several trailers caught fire.

As a result of those fires, the department is encouraging residents and businesses in the area to take steps to prevent fires.

For businesses, SFD recommended the following:

On Saturday, Seattle police declared a riot following large demonstrations in the city’s Capitol Hill neighborhood and arrested more than 40 people. Twenty-one officers were also hurt, and one had to be taken to the hospital for treatment.

Thousands of people gathered Saturday afternoon to march through Capitol Hill and protest police brutality and stand in solidarity with protests that have been happening nightly in Portland. The protest remained peaceful most of the afternoon until the group reached the King County Youth Service Center near 12th Avenue and Alder Street.

Seattle police said about a dozen people entered a construction site at the center and set fire to portable trailers and other equipment, and broke windows on personal vehicles in the area and court facilities.

The group continued to march toward the Seattle Police Department's East Precinct, damaging businesses along the way, including breaking nearly all the windows at the Starbucks on 12th Avenue and E Columbia Street.

Seattle police said several people emerged from the group and started spray-painting and trying to disable the security cameras at the East Precinct at 12th Avenue and East Pine Street. At least one person breached the fencing and threw an explosive device that left an eight-inch hole in the side of the precinct.