Students temporarily moving to new school due to rain damage

West Tualatin View Elementary is not the only building in the Portland metro area dealing with damage from heavy rain. 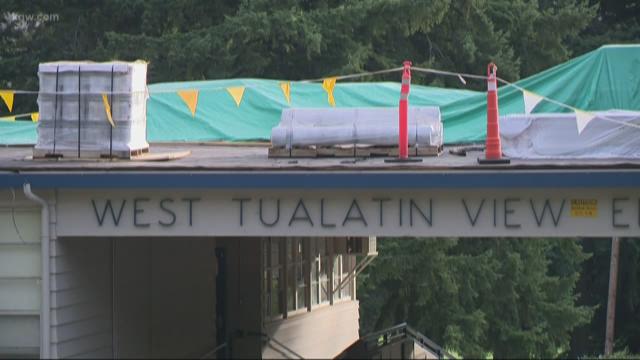 PORTLAND, Ore. — Students and staff at West Tualatin View Elementary in the Beaverton School District will temporarily move to a different building starting Tuesday because of water damage from heavy rain.

In August, contractors started a $1.4 million project to replace the roof at the school. The project was supposed to be done by Oct. 20.

Heavier than normal rain in August and September caused problems. The rain soaked ceiling tiles and some of the carpet, and fungus was growing in some rooms.

"There's been a few leaks," he said. "One in my classroom, one outside and one on top of the stairs."

The Beaverton School District made the decision to move the students to the new middle school on Northwest 118th Avenue, about two and a half miles away. That building also houses the Arts & Communication Magnet Academy.

"This wasn't an easy decision," said Joshua Gamez, the chief facilities officer for the district. "The health and safety of our students was the number one priority."

RELATED: Classrooms in Crisis: Oregon school test scores down across the board

Students will be at their new location for at least six weeks. The plan is to have the new roof in place and repair work inside the building done so students can return Nov. 1.

The school isn't the only building in the Portland metro area with water damage caused by heavy rain and a leaky roof. Two Stroke Coffee Co. in north Portland was forced to close this week, blaming a faulty roof repair job.

Kachinka, a restaurant in southeast Portland, has been closed for about two weeks after water seeped in through the roof, which the owners said was being worked on and was not sealed properly.