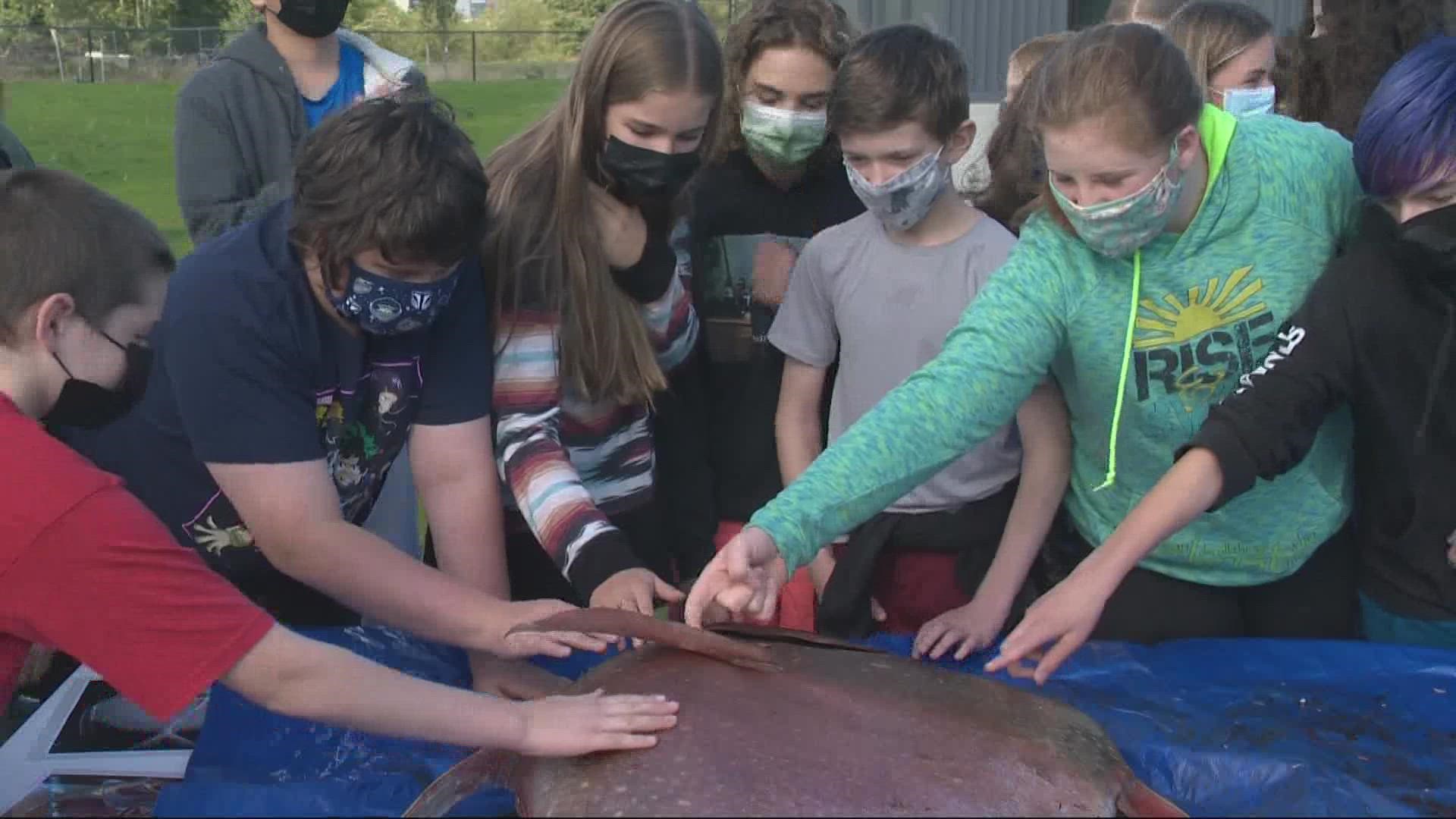 WARRENTON, Ore. — When a 100-pound tropical fish washed ashore on the northern Oregon Coast over the summer, Nate Sandel saw it as a perfect opportunity to educate local kids.

Sandel is the director of education at Columbia River Maritime Museum. The deceased moonfish, otherwise known as an opah, was found on Sunset Beach between Warrenton and Seaside in July, and they are seldom found in the Pacific Northwest.

"I grew up in the Midwest. Nobody was ever bringing in sharks or rare tropical fish that lost their way into my classroom," Sandel said. "And I'm a hands-on teacher, and so I like all of our learning for our kids to get into it and get to do the great thing."

On the first day of October, about 30 to 40 seventh-graders from Warrenton Middle School joined Sandel on the grass field in the school courtyard.

"Raise your hand if you know what kind of fish this is," Sandel said to the students. Almost all of them raised a hand. The students had been learning about the opah fish since school started.

"The main thing we want to look at is the gills of this fish," Sandel told KGW before the dissection. "This fish is the only warm-blooded fish in the entire world."

After taking a few measurements of the fish, Sandel, with help from students, began to cut into the thick, 3½-foot long fish.

"This isn't an experience you get everyday, so you gotta have fun with it," said 7th grader Layla Larsen. "It looks small in the pictures but when I saw it in person, it looks a lot bigger."

Remember the Opah fish found on the Oregon coast this summer?

Warrenton 7th graders recently were given the opportunity to dissect it alongside Nate Sandel with the Columbia River Maritime Museum. pic.twitter.com/i6hcHvJqBT

Opah are found primarily in deep, warm waters, like off the coast of Hawaii. Sandel quizzed the students about its unique trait.

"What can it do that no other fish in the world can do?" Sandel asked.

"It is the only fish that can regulate its own body temperature," one student answered, correctly.

Sandel said the fish's body temperature is warmer than the water around it, which allows it to swim fast and catch its prey, which is primarily squid.

In some sections, the opah's skin was at least an inch thick. Sandel had hoped to get inside to the stomach to see what the fish last ate.

"It took us the entire hour just to get it filleted out just to see that, but we couldn't actually peel it back because its bones are [about two inches thick]," Sandel said.

The Seaside Aquarium plans to take samples of the opah's fins and send them to a lab to figure out the fish's sex and approximate age. The aquarium will also attempt to reconstruct the fish's skeleton so it can be preserved and possibly put on display.

As to how it ended up on the Oregon Coast is anyone's guess.

"Definitely showing that the climate is changing," said Sandel. "What some of the theories are of what brought this fish up here, when it's typically not is it was following the warm water currents heading north and following food sources and probably got trapped in and might have gotten hypothermia, might have died of old age. "It's a fully grown fish."