LOS ANGELES — A magnitude 6-4 earthquake was felt throughout the Southland Thursday, shaking up local residents celebrating the Fourth of July.

The quake, which began at 10:33 a.m., was centered about 7 miles southwest of Searles Valley, a sparsely populated part of the Mojave Desert near Kern County and northwestern San Bernardino County, according to the U.S. Geological Survey. 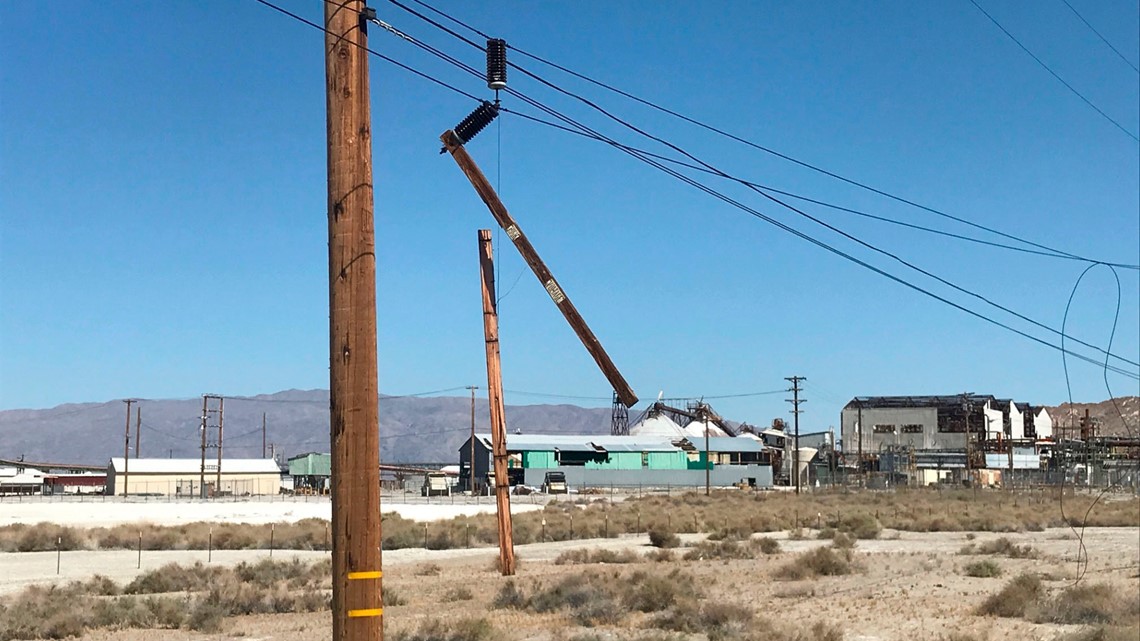 Governor Gavin Newsom on Thursday issued an emergency proclamation due to the effects of the earthquake near Ridgecrest in Kern County and continued aftershocks that have damaged infrastructure, homes and other structures and caused fires.

RELATED: Where was the ShakeAlert?

Southland police and fire agencies quickly took to social media, reporting no injuries from the shaking, but some possible damage and one structure fire.

The Los Angeles Department of Water and Power reported a water main break on Wilshire Boulevard and La Jolla Avenue, power outages affecting the Garment District downtown, a portion of San Pedro, and 20 customers in Granada Hills -- though officials later said power was restored in Granada Hills, and the water main break downtown might have been unrelated to the earthquake.

The Los Angeles Fire Department reported shortly after noon that a survey all 106 fire stations "found no signs of any significant damage in the City of Los Angeles nor any injuries."

The Los Angeles Police Department reported that they have not received any reports of damage or calls for service within the city in relation to the earthquake.

Los Angeles Mayor Eric Garcetti said at 1:30 p.m. that the city was "in great shape," with no significant damage to report.

Officials at LAX said all runways were inspected and no damage was found.

Ride operations were briefly suspended at Six Flags Magic Mountain and Hurricane Harbor in Santa Clarita, but the theme parks tweeted shortly after the quake that operations had resumed as normal.

This photo shows damage on Highway 178 in Ridgecrest, Calif., following an earthquake in the area Thursday, July 4, 2019. The earthquake shook a large swath of Southern California and parts of Nevada on Thursday, rattling nerves on the July 4th holiday and causing some injuries and damage in the town near the epicenter, followed by a swarm of ongoing aftershocks. (AP Photo/Matt Hartman)
AP

Southland police agencies were reminding the public not to use 911 for earthquake questions unless they have injuries or dangerous conditions to report.

Officials with the San Bernardino County Fire Department tweeted that they were conducting an assessment of the region and "no injuries reported, however buildings and roads have sustained varying degrees of damage."

A later tweet said multiple buildings had been found with minor cracks, along with broken water mains, downed power lines and rockslides on certain roads.

The Kern County Fire Department announced that it was responding to nearly two dozen incidents ranging from medical assistance to structure fires in and around the city of Ridgecrest, a town of about 28,000 people and the closest major population center to the epicenter was Ridgecrest.

A state of emergency was later declared in Ridgecrest and signed by Gov. Gavin Newsom, and 15 emergency-room patients were transferred to Palmdale Regional Medical Center while Ridgecrest Regional Hospital was being evaluated for structural damage.

A photo made the rounds on Twitter showing a large crack on Highway 178 near the small town of Trona. Caltrans officials reported Thursday afternoon that the crask "was repaired within one hour by Caltrans District 9 Maintenance crews."

Officials with SoCalGas said an initial inspection revealed "no significant impacts to the natural gas system." The epicenter is within the utility's service area.

It was the strongest quake to be felt in Southern California since 1999, according to seismologist Lucy Jones of Caltech, founder of the Dr. Lucy Jones Center for Science & Society.

Jones said the quake was not on the San Andreas fault.

"It is an area with a lot of little faults but no long fault," she tweeted.

Jones said the "shake alert" computer system at Caltech's seismic facility registered a 48-second warning that shaking had begun, but the warning signal did not go out to the public.

Los Angeles officials later explained that, tweeting: "The #ShakeAlertLA app only sends alerts if shaking is 5.0+ in LA County. Epicenter was 6.4 in Kern County, ??@USGS?? confirms LA*s shaking was below 4.5. We hear you and will lower the alert threshold with ??@USGS_ShakeAlert??"

"Let's remind ourselves that this is not a physical science question," Jones explained. "Giving more alerts convinces people that the system works and generates trust in it. Lots of false alarms generates distrust. Part of the concern in our current early system without complete funding (is) how many false alarms would we be issuing?

" ... The other problem is that there's a lot of use to the alerts beyond damage. Nobody in Los Angeles County was damaged -- nowhere close. We just all felt it. That does not stop people from being scared from feeling it, and one of the questions is what is the psychological benefit of getting a few seconds of warning and knowing that it's coming? That's a hard thing to measure physically."

A magnitude 4.2 quake that preceded the main quake by about 30 minutes was a "foreshock," Jones said.

Several aftershocks in the magnitude-3 range were reported by the USGS, as expected following a substantial quake. Jones said there was a better than 50-percent chance of a larger aftershock in the magnitude-5 area "sometime this afternoon."

The last Southern California earthquake to exceed 6.4 was on Oct. 16, 1999, when a magnitude 7.1 quake struck in the Mojave Desert near Twentynine Palms Marine Corps Base. That quake knocked an Amtrak passenger train off its tracks and damaged two highway bridges.

The full text of the emergency proclamation is below:

PROCLAMATION OF A STATE OF EMERGENCY

WHEREAS on July 4, 2019, a magnitude 6.4 earthquake centered near the City of Ridgecrest in Kern County caused significant damage; and

WHEREAS multiple earthquake aftershocks continue to impact the region; and

WHEREAS the earthquake damaged roads and buildings, resulted in multiple structural fires, and necessitated evacuations; and

WHEREAS the earthquake damaged critical infrastructure, including electrical service lines, water lines, and gas lines, impacting thousands of customers; and

WHEREAS under the provisions of Government Code section 8558(b), I find that conditions of extreme peril to the safety of persons and property exist in Kern County due to the earthquake; and

WHEREAS under the provisions of Government Code section 8558(b), I find that the conditions caused by the earthquake, by reason of its magnitude, are or are likely to be beyond the control of the services, personnel, equipment, and facilities of any single local government and require the combined forces of a mutual aid region or regions to appropriately respond.