PORTLAND, Ore. -- During an emotional interview Tuesday morning with KGW, Micah Fletcher, one of three men stabbed during last week's racist attack on a MAX train, said he's having a hard time processing what happened to him. 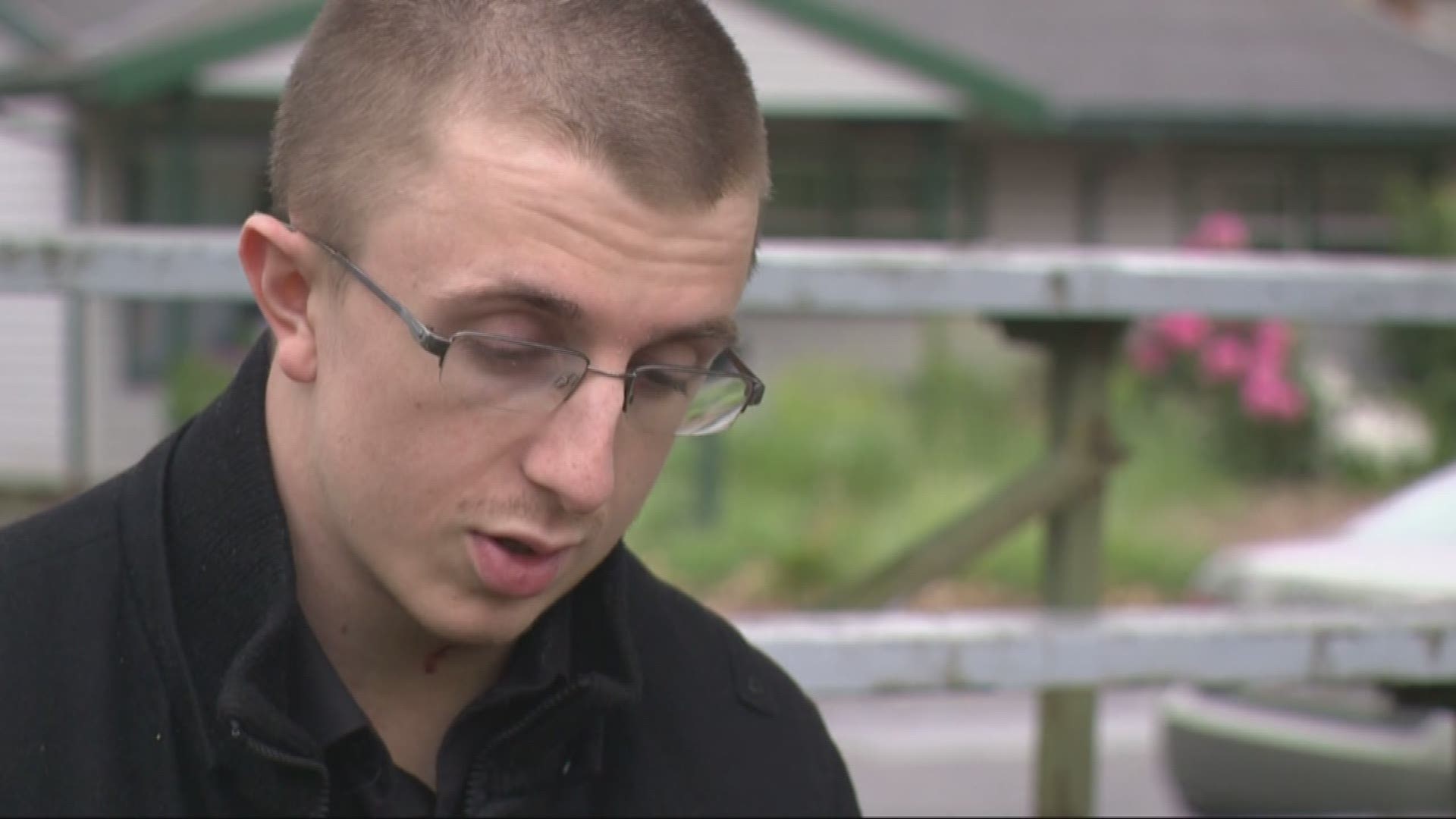 We're about to go through a very hard time. Things are happening, the world is changing. We need to remember that this is supposed to be a city where people can be safe, where children can play, where laughter can grow and where love can take roots in the soil. -- Micah Fletcher

PORTLAND, Ore. -- During an emotional interview Tuesday morning with KGW, Micah Fletcher, one of three men stabbed during last week's racist attack on a MAX train, said he's having a hard time processing what happened to him.

Fletcher said he's unsure how to move on after the attack, so he's focusing on trying to get better.

"I got stabbed in the neck on my way to work, randomly, by a stranger I don't know, for trying to just be a nice person," said the 21-year-old Portland State University student. "Like, I don't know what to do after that, you know.

Fletcher, who won a citywide poetry slam in high school for a poem that spoke out against prejudice faced by Muslims, said Portland can only heal from this tragedy if its citizens come together to assure that the city is a place where people can feel safe again.

"We're about to go through a very hard time. Things are happening, the world is changing," he said. "We need to remember that this is supposed to be a city where people can be safe, where children can play, where laughter can grow and where love can take roots in the soil.

"It's going to take us standing together as a community if you want that to be the Portland we live in. There are a lot of different issues that we need to tackle. But we can't attack any of those issues head-on until we at least know we can be safe in our streets from violence and hatred," he said.

On May 26, 35-year-old Jeremy Christian allegedly stabbed three men who were trying to protect a Muslim woman and a black woman, after Christian shouted racial and anti-Muslim slurs at them.

"Two very good people lost their lives that day," Fletcher said in Tuesday's interview. "I'm very injured, both physically and mentally. I do not feel well. And I mourn the loss of those two very brave individuals who put their lives on the line like that. I wish their families as much healing as they can in these times of immense trials and tribulations."

Fletcher said two people came to his aid after he was stabbed Friday. He said he owes those people his life and also thanked officers, paramedics and doctors who helped him.

Community support has been helpful as well, Fletcher said. He noted that he has felt the expressions of love, support and admiration. He also said funds raised to help he and his family are appreciated.

"The outpouring of support has been immensely amazing, especially [for] my family," he said. "I really worry about, I do, about bills in the household and how my parents can afford things. And it gives me great hope that perhaps for once I will not have to be a financial burden upon my parents."

Fletcher said once his medical and recovery bills are covered, he will donate the rest of the money raised on his behalf to the families of Best and Namkai-Meche.

"I don't want to profit off of this," he said. "I want any money, once the medical bills are paid off, I want the money to go to the families of the people that lost their lives that day."

Injury missed being fatal 'by millimeters'

An affidavit of probable cause released Tuesday revealed more information about what happened Friday afternoon.

After Christian got on the train and started shouting at two teenage girls and making threatening comments about "decapitating heads," several men stepped in to diffuse the situation. A man identified as Mr. Forde in the court document first tried to stop Christian but was unsuccessful.

According to TriMet video and cell phone video taken by train passengers, Christian charged at Namkai-Meche first. Fletcher stood up next to Namkai-Meche and was shoved by Christian. Fletcher shoved him back and yelled at him to get off the MAX. Christian, who had retrieved a 3 3/4-inch folding knife from his pocket, opened the knife and swung, stabbing Fletcher in the neck. Fletcher grabbed his neck to stop the bleeding and exited the train, where he was given medical attention by passengers on the platform until police and other first responders arrived.

On the train, Christian proceeded to stab Namkai-Meche and Best, who had moved in to help, multiple times. Christian then left the train and was apprehended shortly after by police.

Fletcher was taken to Legacy Emanuel and treated for a stab injury to his left neck. Fletcher told Multnomah County Deputy District Attorney Ryan Lufkin that doctors told him his injury missed being fatal by millimeters.

"Micah needs a lot of rest. Please give him time," she wrote. "I know maaaany people want to see him, but a lack of rest and a lot of emotions will slow his healing process. Out of respect, allow him to reach out to you when he is ready for visitors."

Hospital spokesperson Julie Reed confirmed Tuesday that Fletcher had been released from the hospital.

Helm sent KGW a photo of she and Fletcher from the hospital on Monday afternoon.

Portland State University Wim Wiewel sent a letter to students Monday, which read, in part, "Micah's family and friends report that he is getting better every day, and he was able to give a thumbs up from the hospital over the weekend in a photo the family shared with the media."

Micah Fletcher in a photo from the hospital that was shared with the media. (Photo: courtesy of the Fletcher family)

The following is the complete text of the letter from Wiewel:

We are relieved to hear that Portland State music student Micah Fletcher continues to recover from his knife wounds from the savage attack on Friday on the MAX train in Portland. As you have heard, Micah was one of three brave men who responded to a man verbally assaulting two young women with hate-filled and anti-Muslim taunts. Tragically, Rick Best and Taliesin Namkai-Meche died from their stabbing injuries. Their assailant is in custody.

Micah's family and friends report that he is getting better every day, and he was able to give a thumbs up from the hospital over the weekend in a photo the family shared with the media. We are thankful for his recovery and look forward to the day we can welcome him back to PSU.

As a community, we at Portland State join others across the nation who are horrified by this attack and offer condolences to the families of the victims. Our CARE team at PSU has reached out to Micah's family to provide assistance and support for his recovery. We also are providing support for his classmates in the School of Music and others with counseling and assistance through the campus Center for Student Health and Counseling (SHAC).

We encourage students to utilize PSU's support services when needed. They include SHAC, Residential Life staff, our cultural and student resource centers and the Dean of Student Life. In addition, staff with the Student Activities and Leadership Programs and Campus Public Safety are reaching out to student groups such as the Muslim Student Association to offer support.

Maintaining a safe and welcoming campus is our top concern. Please contact Campus Public Safety or the Office of Global Diversity and Inclusion if you encounter threats, harassment or discrimination on the PSU campus.

In closing, we at Portland State are deeply moved by the response to this tragedy. There has been an outpouring of support for the victims and their families, including financial assistance. Our political, civic and religious leaders have stood together to condemn this hate-filled attack and praise the heroic actions of Micah, Rick and Taliesin. Let's build on that solidarity and goodwill as our community moves forward together.