A hotshot crew in based in Klamath Falls focuses on recruiting veterans. Members have traded assault rifles and other weapons of war for chain saws and shovels. But, like in the military, they have camaraderie, structure and chain of command. And the occasional adrenaline rush. 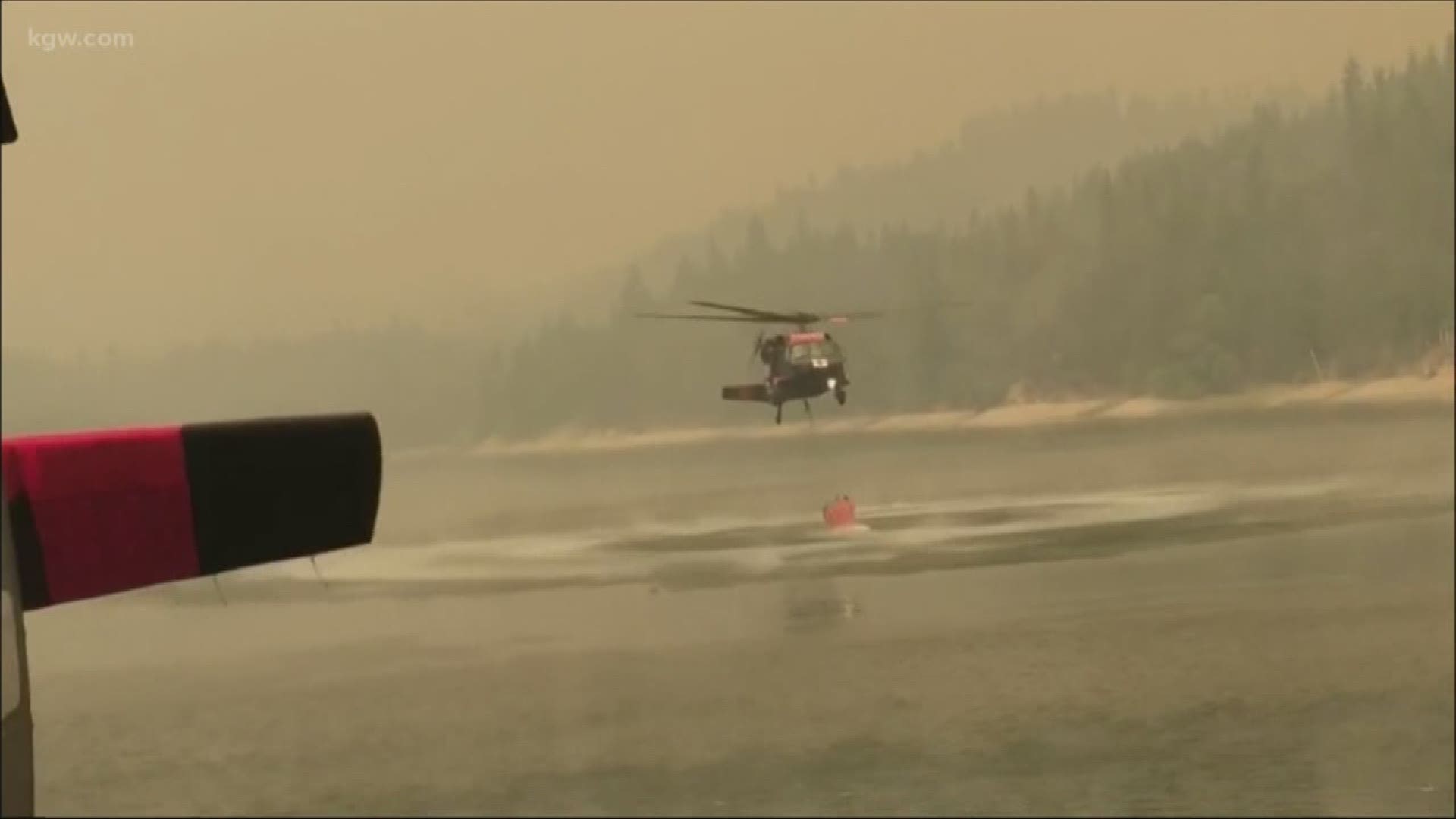 SALEM, Ore. (AP) — After being in firefights in Afghanistan and Iraq, members of one of America's newest elite wildfire crews are tasked with fighting fires in rugged country back home.

On the U.S. Bureau of Land Management's only hotshot crew focused on recruiting veterans, members have traded assault rifles and other weapons of war for chain saws and shovels. But, like in the military, they have camaraderie, structure and chain of command. And the occasional adrenaline rush.

"Being in a firefight is way different than being in a wildland fire, but both are mentally taxing," said Chris Schott, who served two tours in Afghanistan with the Army's 7th Special Forces Group. "In a wildland fire, no one's shooting at you, but conditions can go favorable to unfavorable very quickly."

The Lakeview Veterans Interagency Hotshot Crew, based in Klamath Falls, Oregon, received its hotshot certification after rigorous training and testing, the Bureau of Land Management announced last week. It's now among 112 elite U.S. wildland firefighting teams and the only targeting veterans for recruitment, the agency said.

"We felt it was important for them to transition back home," McGirr said.

Their maturity and ability to follow and lead are benefits that quickly became apparent when the crew started operating in 2012 as a lower-classification unit, McGirr said. Their military experience also means they're used to enduring tough missions.

"It's a lot of arduous hiking in nasty terrain," McGirr said. "The steeper the terrain, that's usually the ground hotshots are on."

Kenn Boles, a member of the crew since 2012 who did three tours in Iraq as a Marine, agreed that veterans can withstand the intense work.

"You're working hard, sweating; the fire doesn't stop because of those things," he said. "It's like in combat — just because you're hungry, tired and thirsty doesn't mean the firefight stops."

The crew is on leave and hasn't been battling the recent deadly wildfires in California.

Of the 25 positions on the crew, 17 are filled by veterans, McGirr said. There are three additional openings, and McGirr said he wants to recruit female veterans, too.

Schott, the Army veteran, said the crew felt they had the potential to achieve elite hotshot status after fighting fires in 2015, including one in Oregon's Crater Lake National Park that they almost had contained when winds picked up and changed direction, pushing the flames behind them.

They worked two weeks in a row, digging fire lines and doing prescribed burns to deprive the fire of fuel. After three days off, they worked another two weeks straight.

"After that, we thought we could be the first veterans hotshot crew in the nation," Schott said.

The crew usually works for nine months, with three months off.

"We spend more time together than with our families," McGirr said. "It's a grueling pace. We eat together, sleep together."

That creates a camaraderie that allows the veterans to share their wartime experiences with those who understand what they endured.

Boles lost a close friend a week after he left Iraq. That was the biggest contributor to post-traumatic stress disorder that hit him later, he said, describing it as "a lot of survivor's guilt." The veterans have each other's backs when PTSD issues arise, acting as a support group.

"Instead of bottling it up, we're really receptive to hearing people's stories and problems," said Boles, who was in the invasion of Iraq and in heavy fighting in Fallujah and Ramadi.

Schott, who served in Afghanistan's Urozgan Province north of Kandahar, said, "A lot of times you think, this can't get any worse. And yet you made it through."

He was in an operations center when he heard radio traffic about someone killed in action. It was his best friend.

"Myself, I was in denial for quite a long time about my PTSD," Schott said, adding that joining the crew and opening up to other veterans "helped me get my life back on track and where it needs to be."

The Bureau of Land Management is proud of the crew and efforts to develop a workforce of veterans, said Jeffrey Fedrizzi, agency deputy director for fire and aviation.

He said the men attaining hotshot status "demonstrates the exemplary quality and performance ingrained in this crew."