The Taylor Creek Fire burning west of Grants Pass continued to advance Monday, bringing a new round of evacuation warnings and closing part of the Rogue River. 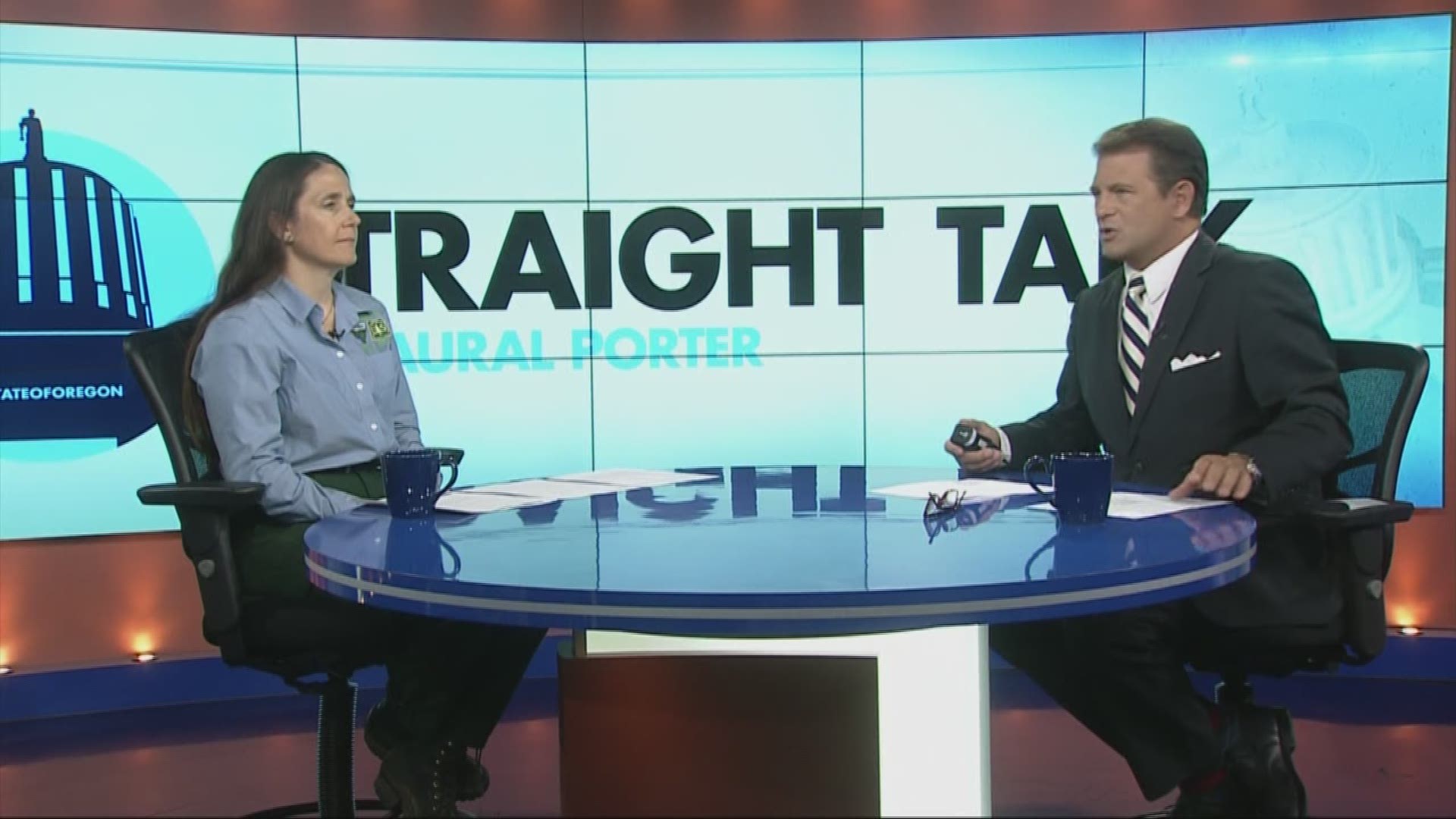 GRANTS PASS, Ore. — The Taylor Creek Fire burning west of Grants Pass continued to advance Monday, bringing a new round of evacuation warnings and closing part of the Rogue River.

The fire is more than 25,000 acres and Monday burned down to Merlin-Galice Road along a popular section of the Rogue River.

Fire teams closed the river from Hog Creek Boat Ramp to Galice, which represents about 8 to 10 river miles, including the stretch though popular Hellgate Canyon.

“We know that closing the river is going to bring a lot of pain to guides, outfitters and all the people who make a living on this river in the summer,” fire spokesman Ferguson said. “But we’ve got fire right down to the river now, and we need to separate rafters and the helicopters dipping into the water.”

The Rogue remains open above Hogg Creek and below Galice. The Rogue’s famous “wild section,” the 36 miles from Grave Creek to Foster Bar near the coast, remains open, but must be accessed from Interstate 5 via Wolf Creek and Lower Galice Road.

Rafters with a permit must check in at Grave Creek Boat Ramp instead of Rand.

In addition to the river closure, fire teams issued a level 1 evacuation — meaning “get ready” — for a large swath of area along the east side of the Rogue River, including Riverbanks Road. See this post for details.

“That was issued to ask people to pay attention,” Ferguson said. “The river is now the fire line in some places, so we want people living on the other side to be ready. We’re prepared to put out any spot fires if the fire does jump the river.”

At the same time, there is positive news. Fire teams announced they’d achieved 20 percent containment on the fire and were able to downgrade a few evacuation levels on the south and east side of the fire.

The evacuation status for Limpy Creek Road has been downgraded from level 3 ("go now") to level 2 ("get set" to go).

The Taylor Creek Fire remains the highest priority wildfire in Southern Oregon, with more than 2,600 firefighters working the blaze.

The fire has forced more than 1,000 people to evacuate from their homes in the Merlin and Grants Pass area, officials said, but hasn’t burned any homes or structures yet.

Taylor Creek is the largest of the fires to have grown out of a lightning storm earlier this month, but there remain eight large wildfires and multi-fire complexes burning in the area that have dropped air quality to hazardous levels across southwest Oregon.

Here's more details on the situation from the morning briefing:

Here’s a roundup on all the fires burning in southwest Oregon.

For details on evacuation levels — as they change — follow the Josephine County Sheriff's Office.

For the most up to date map with evacuation areas, see this page.

Below is an update on all of the major fires.

The wildfire burning on the east side of the Kalmiopsis Wilderness, known as the Klondike Fire, continued to grow this weekend. As of Monday night, the fire has burned 15,915 acres with just 5 percent containment.

"Active to very active fire behavior is expected today and tonight with growth to the east and north," fire teams said in a Monday report.

The fire has spread out of the wilderness and fire teams are primarily looking at how to stop the blaze from moving east toward Selma.

"Our primary focus is protecting values along the Illinois River Road and developing good fire lines to protect the U.S. Highway 199 corridor and towns such as Selma," Noel Livingstone said in a morning briefing Monday.

In addition, a number of trails, including the Illinois River Trail, have been closed.

In an update Monday night, fire officials said wildfire smoke has been limiting fire behavior until it clears in the afternoon. Anticipated increases in humidity over the next several days could dampen fire activity and smoke emissions, but poor air quality continues to persist in communities near the fire.

Crews battling flames in the Grave Creek and Pleasant Creek fires burning near Wimer were able to slow growth this weekend. The fires are part of the 8,886-acre Garner Complex Fire.

With teams working to secure perimeters and smoke from the Klondike Fire helping drop temperatures, the complex was 65 percent contained as of Monday night.

Fire teams have the Pleasant Creek Fire at 835 acres, a slight shrinkage since Saturday.

The Grave Creek Fire reversed its growth pattern and shrank by a few acres, making it a total of 7,816 acres.

Despite the positive news, officials are remaining cautious.

"While the threat to homes on the Garner Complex has diminished, evacuations remain in place for the safety of the residences and fire crews," officials said in an update Monday night.

The fire grew to over 5,300 acres as of Monday evening and is continuing to spread on the north and south ends of the fire.

By the end of the day, firefighters had managed to increase containment from 10 percent to 15 percent.

On Sunday, spot fires were observed on the West branch of Indian Creek and areas west of Kelly Lake.

See this page for the latest updates.

This complex of six larger wildfires and numerous smaller ones grew to 14,196 acres as of Tuesday with 16 percent containment.

The Miles Fire, now top priority in the South Umpqua Complex, continued to push east toward Hawk Mountain. Multiple spot fires were sparked by wind-blown embers near the southeast perimeter. The fire has covered 3,755 acres with 14 percent containment.

Crews were shifted away from the Snowshoe Fire, covering 3,816 acres with 95 percent containment, which is still in mop up with good progress made on hot spots.

Wind gusts carried embers sparking multiple spot fires half a mile out of the Columbus Fire southern edge, according to reports. The fire has covered 5,226 acres with no containment.

Closures remain for a campground and roads in the Tiller Ranger District.

The 19 small- to medium-sized wildfires burning north of Prospect and Tiller on either side of Oregon Highway 62 south of Crater Lake continue to spread.

Collectively they have burned more than 5,200 acres as of Monday morning.

The Level 2 'Be Set' evacuation order is still in place for the Elk Creek area. Officials are encouraging residents "to prepare for possible evacuation, ensure house numbers are visible, and remove flammable material from the perimeter of their homes."

Firefighters worked on improving multiple fire lines north of homes by setting up hoses and sprinklers and moving flammable items away from houses.

"Residents have been extremely appreciative of the efforts emergency responders have been doing for their community," fire officials said.

Fire personnel numbering over 840 remain assigned to the fire.

Other active fires in the area include:

The report states that all other fires on the north end of the High Cascades Ranger District have been contained.

For more information, visit this page.

The Hendrix Fire southwest of Ashland, in the Little Applegate River area, remains at 1,081 acres and is now 70 percent contained as of Monday.

The southeast corner remains without a firm containment line due the to steep, challenging terrain according to officials.

Officials moved back the expected containment date to the end of August due to the lack of containment lines on the southeast corner.

A helicopter and 267 personnel remain assigned to the blaze.

A portion of the Pacific Crest Trail closed by the fire has been reopened.