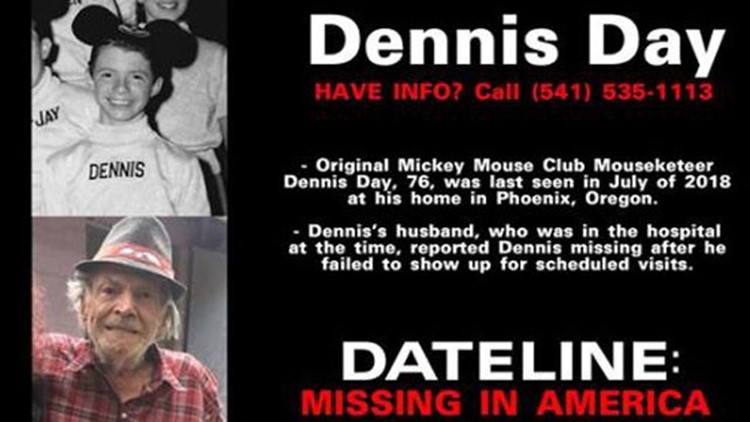 Photo by: NBC
Police and family have positively identified the body of a man found in a Southern Oregon home as original Mouseketeer Dennis Day.

Arrest made in death of Oregon man who was original Mouseketeer

PHOENIX, Ore. — An arrest has been made in connection with the death of a Southern Oregon man who was on original member of Disney’s "The Mickey Mouse Club."

No details were released about what led police to connect Burda to the death of Dennis Day. The investigation is ongoing.

The Oregonian reports Burda was a handyman who did work around the house Day lived in.

Day was found dead in his Phoenix, Oregon, home in April, months after he was reported missing.

Day was reported missing in July 2018 by his husband, Ernie Caswell, who suffers from memory loss and was in the hospital when he made the report. Day's car was found on July 26 at the Oregon Coast. A missing person report said Day had "uncharacteristically" left his dog with a friend on the day he disappeared.

In February 2019, members of Day's family spoke with television news show "Dateline," saying the investigation into Day's disappearance had been poorly handled.

Oregon State Police released the following timeline of the investigation into Day’s disappearance and death:

July 13, 2018: Phoenix Police Department and Jackson County Fire District #5 responded to the residence at 510 Pine St. Phoenix, on a medical call. Henry (aka Ernie) Caswell (Day’s husband) had fallen several times. Henry was transported to the hospital and later a care facility where he has been residing since.

July 26, 2018: Oregon State Police responded to a domestic disturbance call on Highway 42, near milepost 30 in Coos County. A male and female were in possession of a vehicle that belonged to Day. The female driver was cited for driving while suspended and the vehicle was impounded.

July 27, 2018: Phoenix Police Department entered Day as missing in LEDS/NCIC. They then conducted another search of the house and were unable to locate anyone.

Aug. 8, 2018: Phoenix Police Department received a report of a “bad smell” coming from 510 Pine St. Officers responded and noted “nothing observed or smelled in the area”.

Jan. 28, 2019: A meeting was held involving Phoenix Police Department, Jackson County Sheriff’s Office and Oregon State Police to discuss the case. The sheriff’s office and OSP each provided a detective to assist.

April 4, 2019: Phoenix Police Department obtained the use of cadaver dog and located a body in the house.

June 6, 2019: The Medical Examiner’s office identified the body found in the residence under strong circumstantial evidence.