Salem sidewalk camping ban to be considered once again

A city task force studying homeless issues also is considering recommending that groups providing free meals to the homeless be responsible for cleaning up that packaging if it's left around town. 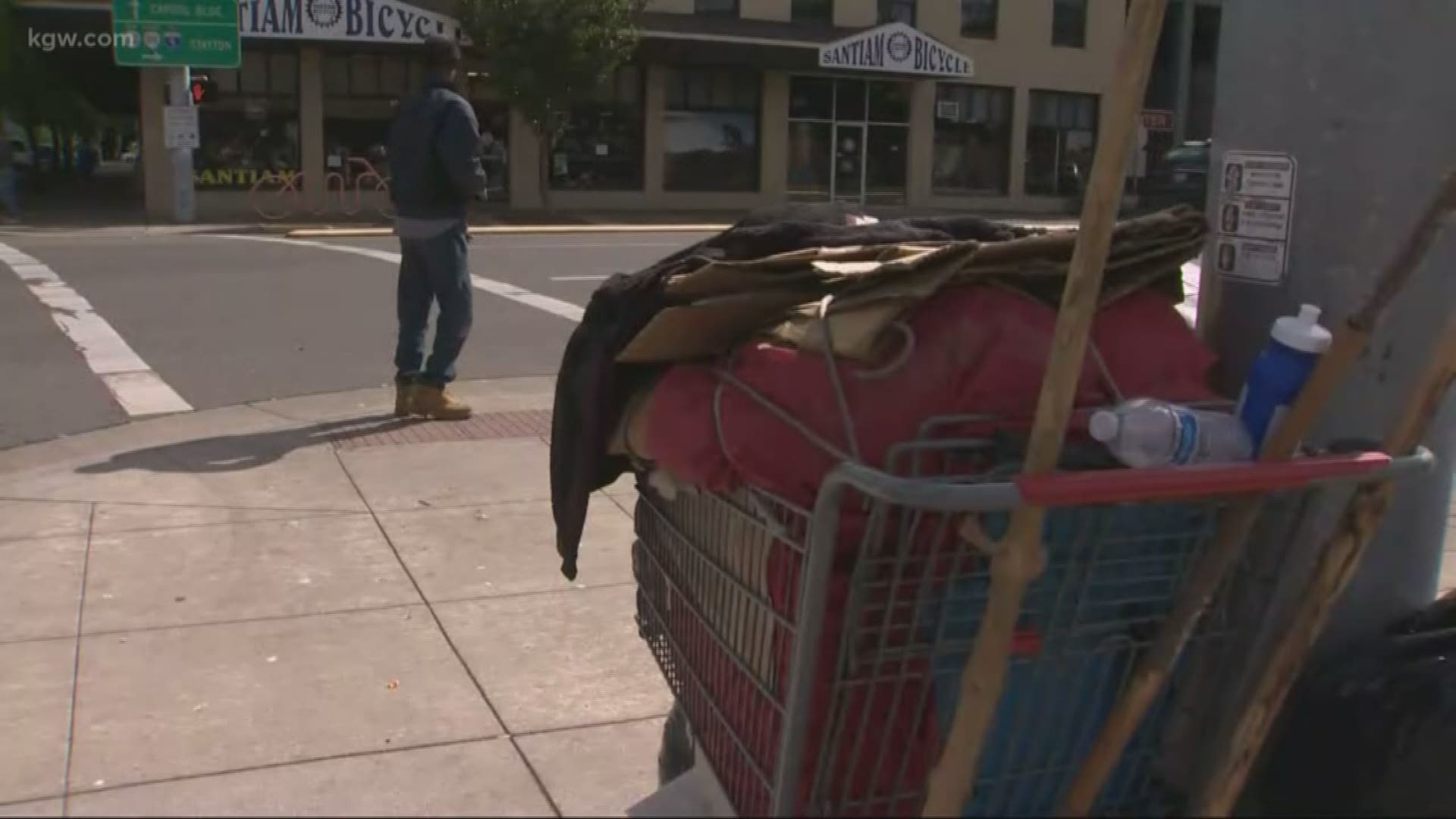 SALEM, Ore. — A controversial proposal to ban camping or storing personal items on Salem sidewalks during daytime hours is back on the table.

A city task force studying homeless issues also is considering recommending that groups providing free meals to the homeless get a permit, stamp their organization’s name on all to-go packaging, and be responsible for cleaning up that packaging if it’s left around town.

The group met five times between Feb. 1 and June 30. On Wednesday, it will finalize its recommendations, which will be provided to Mayor Chuck Bennett and the city manager.

The proposal aims to curb increasing problems reported by downtown businesses and shoppers as the city’s homeless population has grown.

According to the group’s report, those include problems such as public urination and defecation; homeless people using customer restrooms to bathe and wash clothes; and behaviors such as drug use, littering, vandalism, shoplifting and solicitation.

Among the other draft recommendations:

It’s unclear how the sidewalk camping ban was resurrected.

In response to public testimony during the last meeting, on June 13, City Councilor Cara Kaser, who chairs the task force, said it was not on the table at that time. Kaser did not respond to an interview request Monday.

Salem Urban Development Director Kristin Retherford, who facilitated the task force meetings, said the ban is being pushed by some business owners in the group.

"I think there's a bit of a split on the task force," she said. "I expect they'll hammer that one around a bit more."

The American Civil Liberties Union of Oregon opposes sit-lie ordinances, and a Multnomah County court ruled a similar Portland ordinance was unconstitutional nearly a decade ago.

But supporters of such an ordinance say camping and storing possessions on sidewalks can interfere with people’s ability to get to businesses.

It’s also unclear where the idea for the food-service permit plan came from. It was not on a list of possible recommendations provided for the public to comment on at the June 13 meeting.

“Salem is a very giving community, and numerous organizations seek to assist homeless individuals by providing free meals,” the group’s draft report reads. “An unintended consequence of this type of charity is that food is commonly taken away from where it is distributed and discarded on sidewalks, on streets and in alleys and stairwells, creating public health and hygiene issues and placing the burden of cleaning up food and packaging on business owners and the city.”

Volunteer Dan Sheets coordinates some of the dinners served most nights under the Marion Street bridge downtown.

He said his group ensures that diners eat before leaving and dispose of unwanted food and trash in four garbage cans around the area. But other groups hand out sack lunches, and he’s seen the garbage strewn around, Sheets said.

Still, he said it would be hard to label every cup and candy bar, and to police more than the perimeter of a serving area.

The task force will present, discuss and vote on its draft recommendations at a public meeting scheduled for 6 p.m. to 8 p.m. Wednesday, Aug. 1, at the Salem Public Library Anderson conference rooms, 585 Liberty St. SE. No public testimony will be taken.

The report may eventually be presented to the City Council as an informational item, and used to inform policy and budget decisions, Retherford said.

"Even if nothing immediately moves forward, the fact that we've got businesses and service providers and advocates all talking to each other now is a good thing," she said. "The information sharing has improved."