Emily Clark has admitted to cheating in six races since 2013. 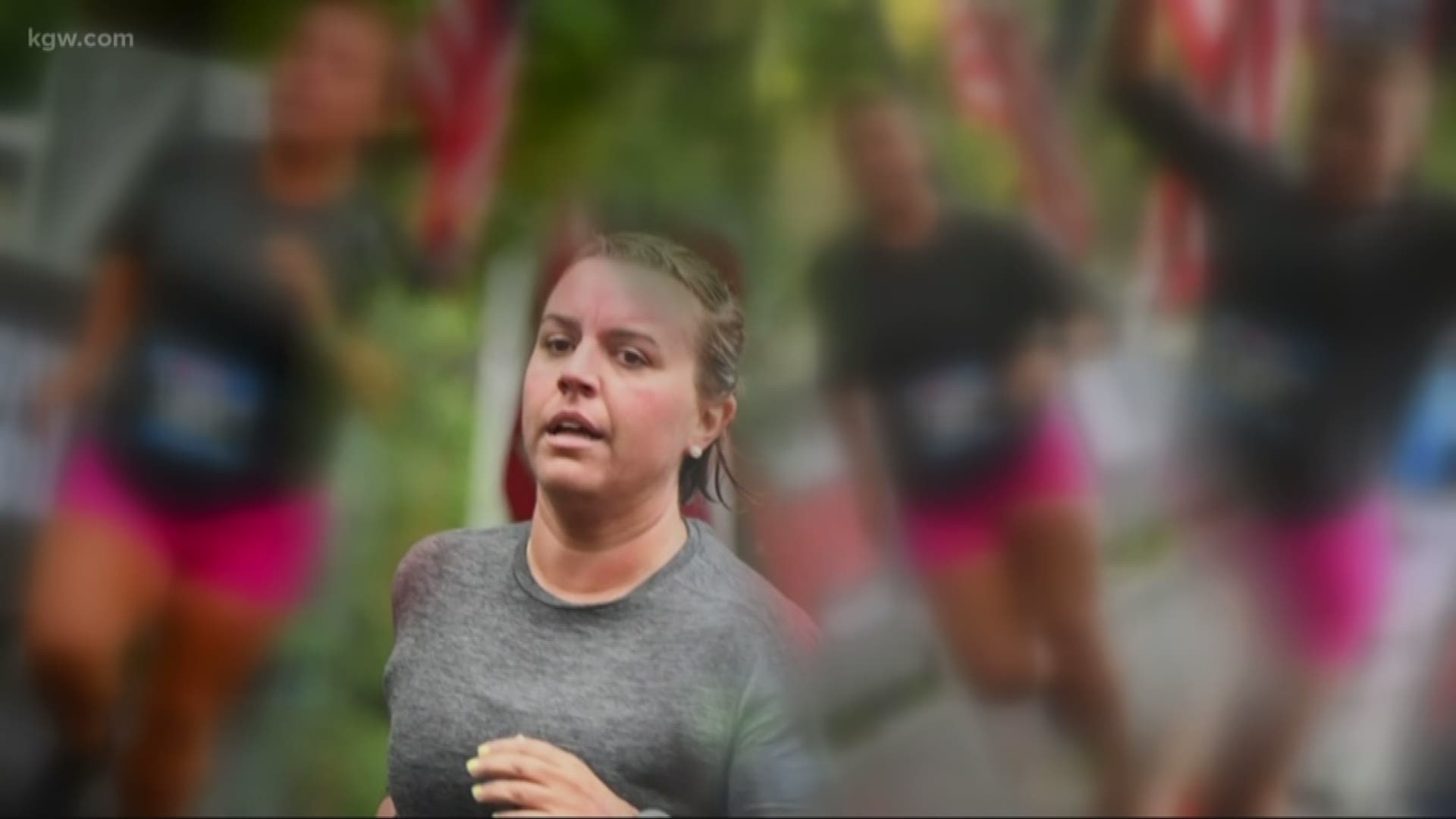 PORTLAND, Ore. — At the start of the PeaceHealth Appletree Half Marathon, Emily Clark was cold and wet like almost every other runner.

She gave into the elements and quit the race shortly after she started.

Instead of going home, she turned around, went to her car where she said she keeps her bike and began to ride the course.

"Being on my bike and riding wasn't an attempt to actually participate in the race. It was like, I'm here, I'm already wet. I'm not just going to drive home now. I'll ride among people and like give people smiles and high fives," Clark said in a phone interview with KGW.

"Originally I was thinking, I'm just going be out there to support people and it wasn't until, I guess, the last mile and a half that sort of like FOMO (fear of missing out) feeling about not being able to finish because obviously I had not been able to run the race. I absolutely let that get the best of me," she said.

She crossed the finish line coming in second place, ahead of Cheyenne Watts.

"I almost feel bad for her, but at the same time there's no honor in cheating even if you technically come in second place," Watts said.

Watts and other racers that finished near the top told race organizers that they never saw Clark along the race and Watts said she was surprised that she came in third.

"I thought was strange because I could count the runners at each turnaround point in the race. I saw one woman ahead of me who definitely looked like an elite runner and was not surprised she was ahead of me," Watts said.

Race organizers confronted Clark with the truth and she admitted to cheating. She also admitted that this wasn't the first time.

In the 2013 Chicago Marathon, she admitted in a statement to making two cuts in the course and says anxiety took over.

"When you have an anxiety attack, your brain stops working. When you're running a marathon, the quickest way is to get yourself back to your car or get yourself to wherever the noise and the crowds are going to stop. That's ultimately what I was trying to do," Clark said.

She cheated in four more races before running the Appletree Half Marathon.

"None of the situations are OK. What happened most recently was incredibly selfish," she said.

Clark regrets what she's done and is asking the running community for forgiveness.

"I would hope there would be some more compassion and some attempt to understand more of what was going on," she said.

She claimed to have run more than a dozen marathons without cheating and would like to run more in the future.

"If I do have a situation again where there is bad weather or have an anxiety attack where it'll be easier to just seek some aid, some help at an aid station or just bow out. Just say today's not my day, I'm done without having to be deceitful about it," Clark said.

CEO Sherri McMillan of Why Racing Events, which organized the PeaceHealth Appletree Half Marathon, said in a statement that Clark would be welcomed back to future races and asked the running community to forgive her.

Here's the full statement from WHY Racing Events:

On Sunday September 15th, Emily was registered to race our Half Marathon event and she crossed the finish line as the 2nd place overall woman. The results were contested by some of the other leaders who claim Emily was not part of the leading group so we initiated an investigation. We have multiple witnesses and have now confirmed that Emily rode her bike to cross over the furthest timing mat and then disposed of her bike at some point to be able to run across the finish line in second place. Our course photographers also capture athletes in the order of their placement on course and she is not in the photos running where she should be providing further evidence. We also confirmed that she has been disqualified due to suspicious results at other events including the Eugene Marathon and Chicago Marathon.

We disqualified Emily’s results and updated the standings to indicate the correct order of overall female athletes as follows:

Once presented with the evidence, Emily confessed and prepared a public statement and apology and provided permission for us to post. In her confession letter below, she reports that this has happened at multiple events for many years. In the letter, she explains how and why she has cheated.

As a race organization, we have an obligation to protect the integrity of results and our athletes who complete the race fairly. She has a pattern of doing this and it has affected others’ podium placements. It is clear that past disqualifications have not prevented her from continuing this behavior. We also have an obligation to other races and race directors to assure she doesn’t continue to do this at their upcoming race and negatively affect the results of their athletes who finish the race fairly.

We have compassion for Emily and are saddened that she has felt the need to do these things. Our hope is that the running community in the Portland area embrace and befriend Emily and pour love and compassion towards her and show her that she can feel that sense of belonging, validation and self-worth without having to lie and cheat to get it. The running community is extremely welcoming…whether you are first or last or somewhere in between…you can find your place.

Let’s not shun Emily but instead understand what may cause someone to do this. Emily is not alone in her actions - It happens more often than we would want to believe. Emily’s story can provide some insight into the mindset of someone who justifies cheating to gain a sense of accomplishment. Our hope is that good comes of this and by finally taking responsibility for her actions, Emily has the chance to heal and come out stronger on the other side. I am personally proud of Emily that she made the decision to confess and apologize. That alone takes a huge amount of strength and courage. When she is ready, she will be welcomed back at a WHY Racing Event and we will celebrate her authentic accomplishment.

To all the members of the running community near and far,

Over the years, I’ve made friends and had incredible experiences as a member of this community. And I’ve also been dishonest and deceitful by cheating in numerous races. I’ve chosen to come clean about it because the truth eventually catches up with you, no matter what.

In 2013, I made two cuts in the course in the Chicago marathon. My anxiety disorder wasn’t being treated at the time because I had just moved across the country and I had a panic attack related to being overstimulated by the runners and the noise and the crowds and just wanted it all to be over. Instead of seeking help at an aid station, I cut the course and pretended like everything was fine. I did not deserve to cross the finish line that day nor a week later when the same anxiety showed up as I was beginning the Baystate marathon and I completed one rather than two loops for the race and left the race without communicating that to the timers, thus skewing the results.

In May 2014, I made similar choices at the Walter Child’s Memorial Run. Overwhelmed and scared running nearly alone in a foreign place, I found a shorter way back to the start/finish area, waited long enough so as to try and go unnoticed as I made my way across and accepted an award that, again, I didn’t deserve and had the exact same experience at the 2018 Swamp Rabbit Marathon.

This spring, after poor training due to unrelenting shin splints, I did it again at the Eugene marathon by running a short distance at the beginning before returning to my hotel room, watching a section of the half marathon, then jumping back into the last few miles of the race in order to be in the finishers area when my friend who was also running would finish. As in all the times before, I had other options but I chose to cheat because I was ashamed that I couldn’t do it pretending felt easier than the truth.

Finally, this past weekend, I biked the majority of the course at the AppleTree half marathon. I was planning to run until the weather became cold and rainy but I still wanted to participate in the event I had been planning on because running had become a way that I was pushing back against weight stigma and somehow convinced myself that cheating my way through it would feel the same as honestly competing.

Toward the beginning of my time in distance running, anxiety attacks during races were the cause for my cheating and the shame that went along with it was a main reason for not coming clean about it in the moment or at any time before now. Since then, though I can run fast, it is always surprising to people because, while I’m not fat, I’m not as thin as people expect runners to be and so I’ve received a significant amount of validation and placed a lot of my self-worth in running. Validation and worthiness are two things I don’t experience a lot in my day-to-day life and my deep need to feel those things from people led me to cheat this spring and fall rather than bow-out of a race I was too injured to participate in and another race when the weather was horrible. In the earlier situations, I didn’t really realize it then but I now know I had better options than the choices I made and I know that those choices hurt a lot of people, and for that, I am deeply sorry. And in the more recent situations, I let my need for validation and feelings of worthiness outweigh the value of my honesty, which, again, deeply hurt other members of this sport and stole from them opportunities to be celebrated that they deserved.