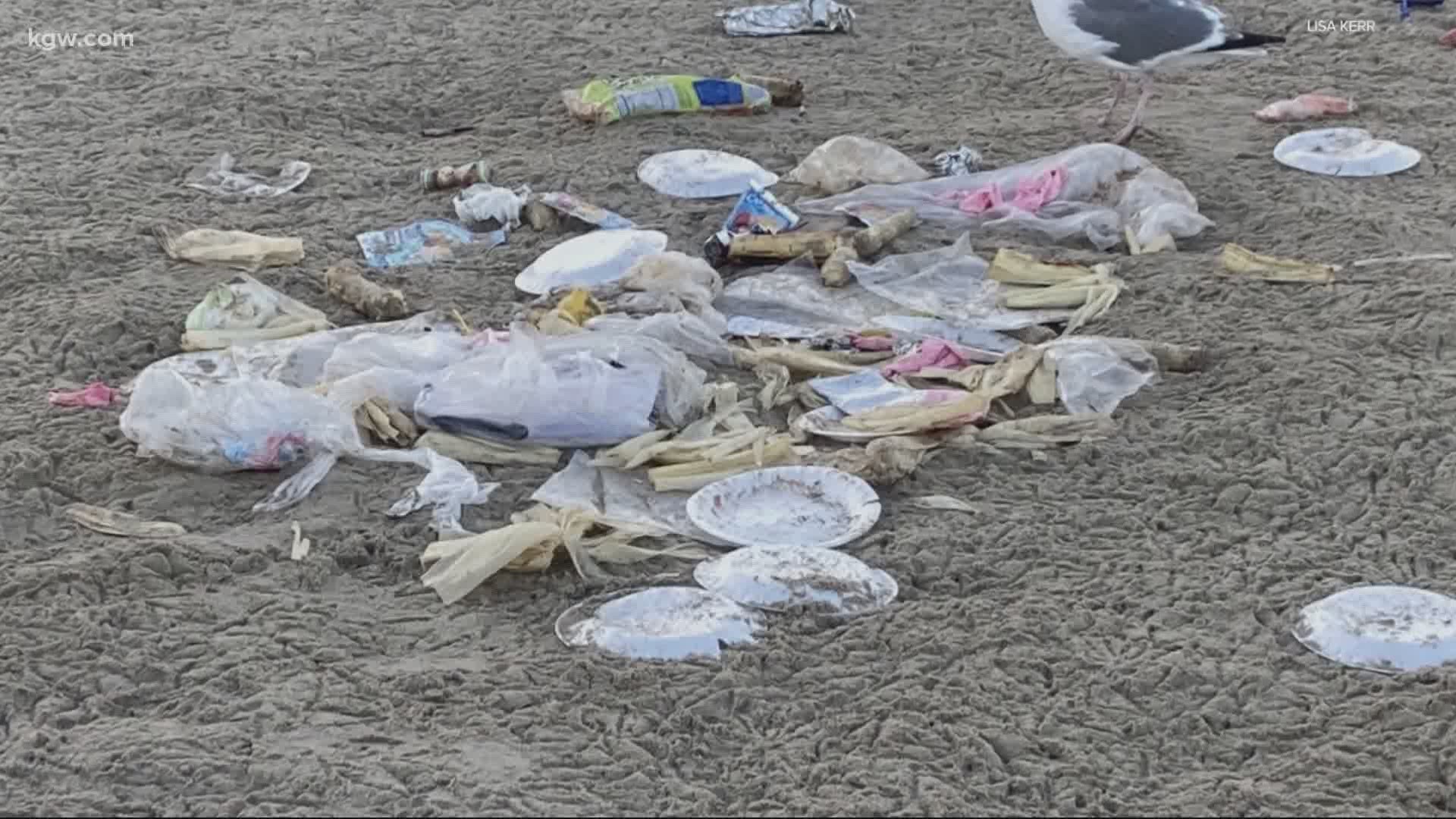 CANNON BEACH, Oregon — Summer draws the crowds to the beaches. The rolling ocean waves, the miles of public lands full of sandy beaches and Haystack Rock sitting just off shore when the tide is in are all big draws for visitors.

"The aftermath is a lot of litter," said Cannon Beach resident Deb Atiyeh, "More than we've ever seen. We're seeing plastic bottles and kids' toys and cigarette butts and diapers and used masks."

She said she's even heard of visitors leaving the beach and leaving their trash in the bushes.

"Cannon Beach is owned by the people, it's not owned by us, but the influx of people not behaving is not OK," she said. "It's more than the town can contain."

Volunteers like Lisa Kerr have been donating their time walking the beach in the early morning hours picking up trash that either washes ashore or is left behind the previous day.

"I've noticed so much more garbage than usual, a lot more cigarette butts. A lot more plastic bottles, a lot more dog poop not picked up. And tons of discarded masks," Kerr said, "I feel like people are coming into my home and trashing it. It feels really personal to me."

Photos of trash left behind at Cannon Beach

Pictures shared with KGW show the daily or weekly trash cleanups that volunteers and residents are doing. Among the items: discarded tent frames, beach towels, sand toys, and what Kerr said looked like someone's picnic leftovers.

"It looked like maybe 20 people had a picnic and just sort of like they did everything. They changed the diapers of their kids. They had drinks, they had food and they just got up and went home," Kerr said. "They left it all there right at the tide line."

"It's easy to feel disheartened and just discouraged by cleaning trash and coming out the next day and just seeing more trash," said Kelli Ennis, director of the Haystack Rock Awareness Program. "I think we need to take a step back and recognize a lot of this is a little temporary. We're in a bit of a transition period and it takes time to educate everyone that it's an important issue."

"We are seeing a higher amount of people, I think compounded with the fact that people are wearing PPE, disposable gloves, disposable masks, more hand sanitizer bottles, the fact that there's more take out, more delivery, more disposable containers, I think it's seeing a little bit more what I am assuming to be unintentional littering," said Kelli Ennis, director of HRAP.

She said it's more of a temporary problem then a permanent one.

"I think this is an acute issue, this is not representative of what normal year is, as far as trash and littering. It's not like people are becoming more wasteful or anything like that. I think it's just a consequence we knew was coming."

Oregon beaches are public lands, operated and maintained by Oregon State Parks. The state agency says impacted funding and a reduction in trash services has meant that trash is not getting picked up as often at state parks.

A spokesperson for the parks says that they are working on creating better signage to remind visitors that if you pack it in to also pack it out.

Cannon Beach City Manager Bruce St. Denis said the state penalty for littering is up to $1,250 and up to 30 days in jail.