"We have spent over $300,000 to have these vessels assessed and remove any pollution that could be on them," U.S. Coast Guard Lt. Lisa Siebert said. 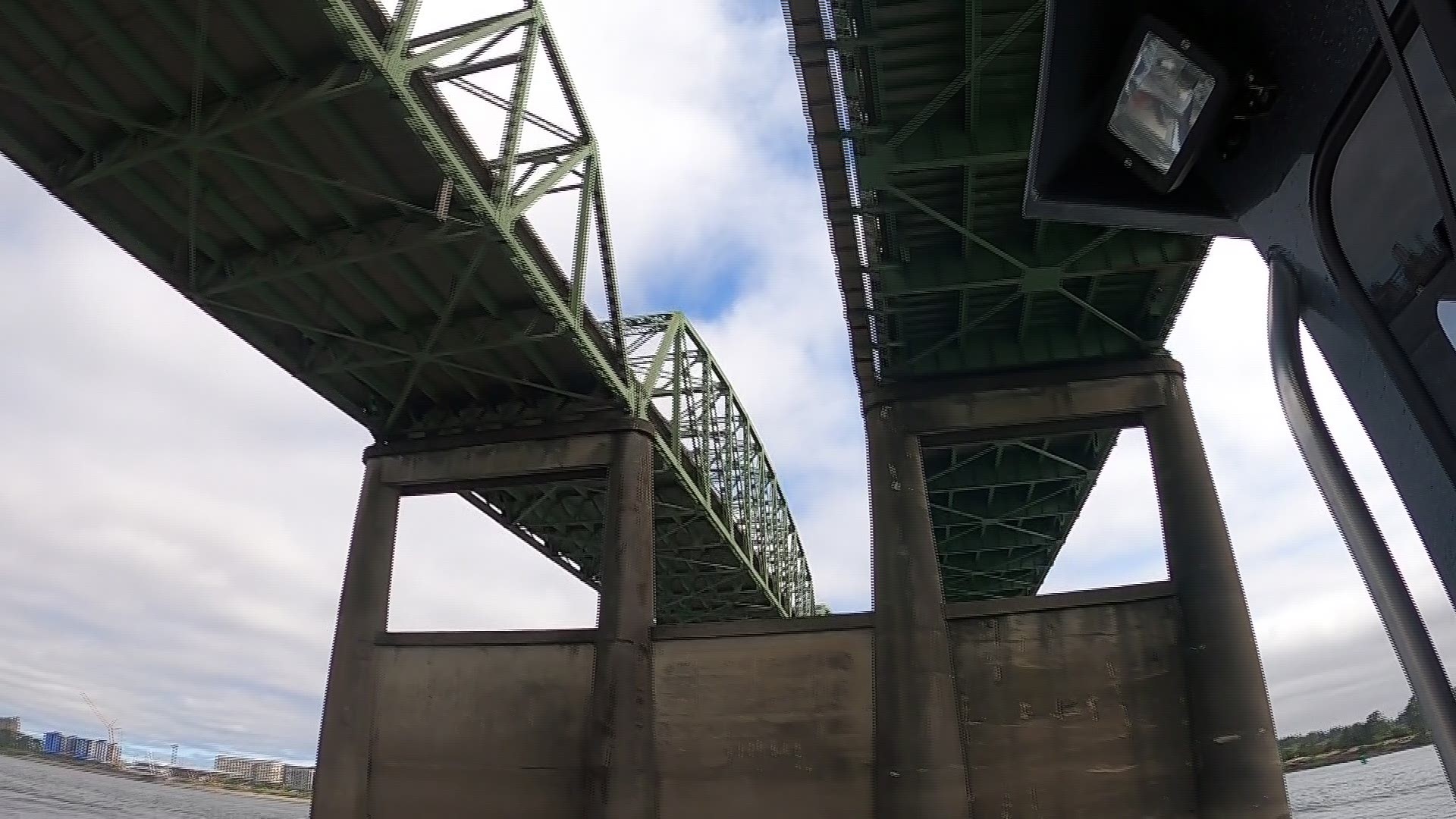 PORTLAND, Ore. — As you cross the beautiful Columbia River on the I-5 bridge, it's not unusual to see ships.

But look closer at two large vessels moored near the shore of Hayden Island, and you'll see they aren't so much ships as floating pieces of garbage — two extreme examples of a very complicated problem on waterways across Oregon and the country.

Left abandoned and forgotten, massive military vessels that once proudly served our country are now serving as shelter for the homeless on Jantzen Beach. They've been stripped of their dignity and become eyesores that give an uninviting welcome to folks crossing into Oregon.

"It's kind of disrespectful, in a way, what has happened to them," said U.S. Coast Guard Lt. Lisa Siebert.

"It's much pretty much the wild west out on the water, you can do whatever you want," said Matt, a transient who once lived on the ship.

The ships have become magnets for vandalism and drug use. One is a Navy tug boat used in World War II called the Sakarissa. The other is an old Coast Guard Cutter. It once did law enforcement patrols on the seas but would be hard-pressed to catch anyone now.

Credit: KGW
A former Coast Guard cutter in its former glory. It now sits abandoned on the Columbia River.

It wasn't supposed to be this way. The person who owned them had the best of intentions, state officials say. Since 2013, the ships have belonged to non-profit Columbia Watershed Environmental Advocates.

A few years ago KGW interviewed its founder about other abandoned boats. He had high hopes of preserving ships.

"Their intent was to basically restore them to their historic value," Oregon Department of Environmental Quality (DEQ) Emergency Response Planner Scott Smith said, "They wanted to make them into museum pieces, maybe take groups up and down the river to get the old Coast Guard and Navy experience of being on these ships.

"Unfortunately it takes a lot to restore a vessel," said Smith. "They fell short in funding and the ability to get these things converted into something safe for the public."

Any remaining hope sunk when the founder passed away. The nonprofit essentially collapsed and there's not enough money to care for the historic ships.

So they sit anchored, falling apart and battered by the elements.

Previously, they posed environmental risks. They still pose public health hazards, and the Oregon DEQ is investigating whether there is asbestos on board at least one of the vessels.

"All three diesel tanks on this ship here were leaking last year. When I boarded it we found it, it was about six feet deep in the bilge," said Multnomah County Sheriff's Office Sgt. Stephen Dangler.

"We ended up taking off 15,000 gallons of oily wastewater," Lt. Siebert said, "To date we have spent over $300,000 to have these vessels assessed and remove any pollution that could be on them."

The responsibility of cleaning up and caring for these two vessels falls on taxpayers.

The Multnomah County Sheriff's Office, Oregon DEQ, Oregon Department of State Lands, Oregon State Marine Board and United States Coast Guard worked together to get rid of the pollution.

Getting the ships off the water is more complicated.

"The real solution is to hopefully find a way to get rid of these vessels. And to have them taken from the site and scrapped and no longer be a potential public hazard," Smith told KGW.

The biggest question remains: Why can't they just tow these old ships off and destroy them?

It takes an incredible amount of expertise and money to do that: $2 million, to be exact. And there are no specific federal or state funds to pay for it. Oregon lacks a unified funding source to deal with derelict vessels, and there is red tape around utilizing the Coast Guard's pollution mitigation funds for removal of ships.

Credit: KGW
Trash left behind by transient squatters on an abandoned ship

"This is a really extreme example of a very complicated problem statewide, particularly here in the Portland metro area," said Ali Ryan Hansen with the Oregon Department of State Lands.

Currently, the Department of State Lands said up to 200 recreational boats and at least eight large commercial vessels are abandoned and derelict in the Portland metro area.

Since 2013, the agency has helped get nearly 100 problem vessels off the water, but even more have been removed through other private and public efforts that they don't keep track of.

There is no timeline for getting these ships off the Columbia, state officials said. In the meantime, transients have found a purpose for the ships.

Matt used to live on board the Navy tug with a friend named Tim.

"It was convenient and nobody told me I couldn't," said Matt.

He now lives on the beach after river patrol officers told him to move.

"While we're all completely committed to a solution for this it's got a big price tag and it's going to take us some time," Ryan Hansen added. "From every angle this is complicated."

PHOTOS: No timeline to remove abandoned military vessels from the Columbia River