The No More Freeway Expansions Coalition and supporters protested ODOT'S proposed I-5 Rose Quarter Improvement Project, by passing out flyers, collecting signatures, and talking to cyclists on the Flint Avenue Bridge. 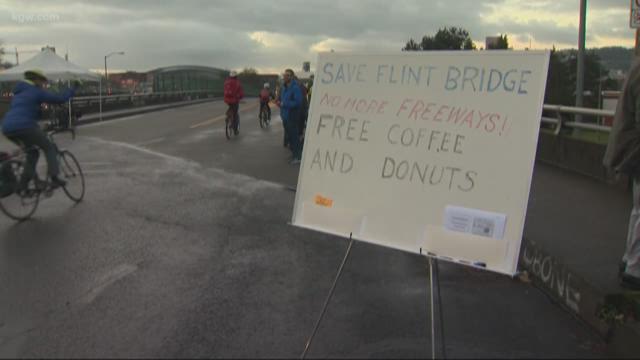 PORTLAND, Ore. – The No More Freeway Expansions Coalition and supporters on Tuesday protested the proposed I-5 Rose Quarter Improvement Project by passing out flyers, collecting signatures and talking to cyclists on the Flint Avenue Bridge.

The group focused on efforts to save the Flint Avenue Bridge, which would be removed in the Oregon Department of Transportation's proposal to expand I-5 in the Rose Quarter area.

They also say ODOT’s $450-million plan would increase pollution right next to the school, and say in the end, it won’t solve the problem of congestion, just add more of it.

“It just makes people drive more, which leads to more traffic, which means more time spent in gridlock,” said No More Freeways spokesperson Aaron Brown. “There are alternatives, by spending this on biking, walking and especially on transit, and our coalition thinks that the city hasn’t spent the proper amount of time setting those alternatives, and instead moving forward with this that won’t solve congestion.”

ODOT says with closely spaced interchanges and no shoulders, the area of I-5 at the Rose Quarter has the highest crash rate in the state, and some of the most congestion.

ODOT says this project would ease congestion and make the area better, not only for drivers, but more efficient for bicyclists, pedestrians and those taking public transit.

The project’s environmental analysis and public engagement started in the summer of 2017, and will last through this year. During this time, ODOT is accepting public comment. To voice your opinion and find out more information about the project, click here.