Police say it's not clear who started the fight. No arrests were made, but the case was referred to the Multnomah County District Attorney’s Office. 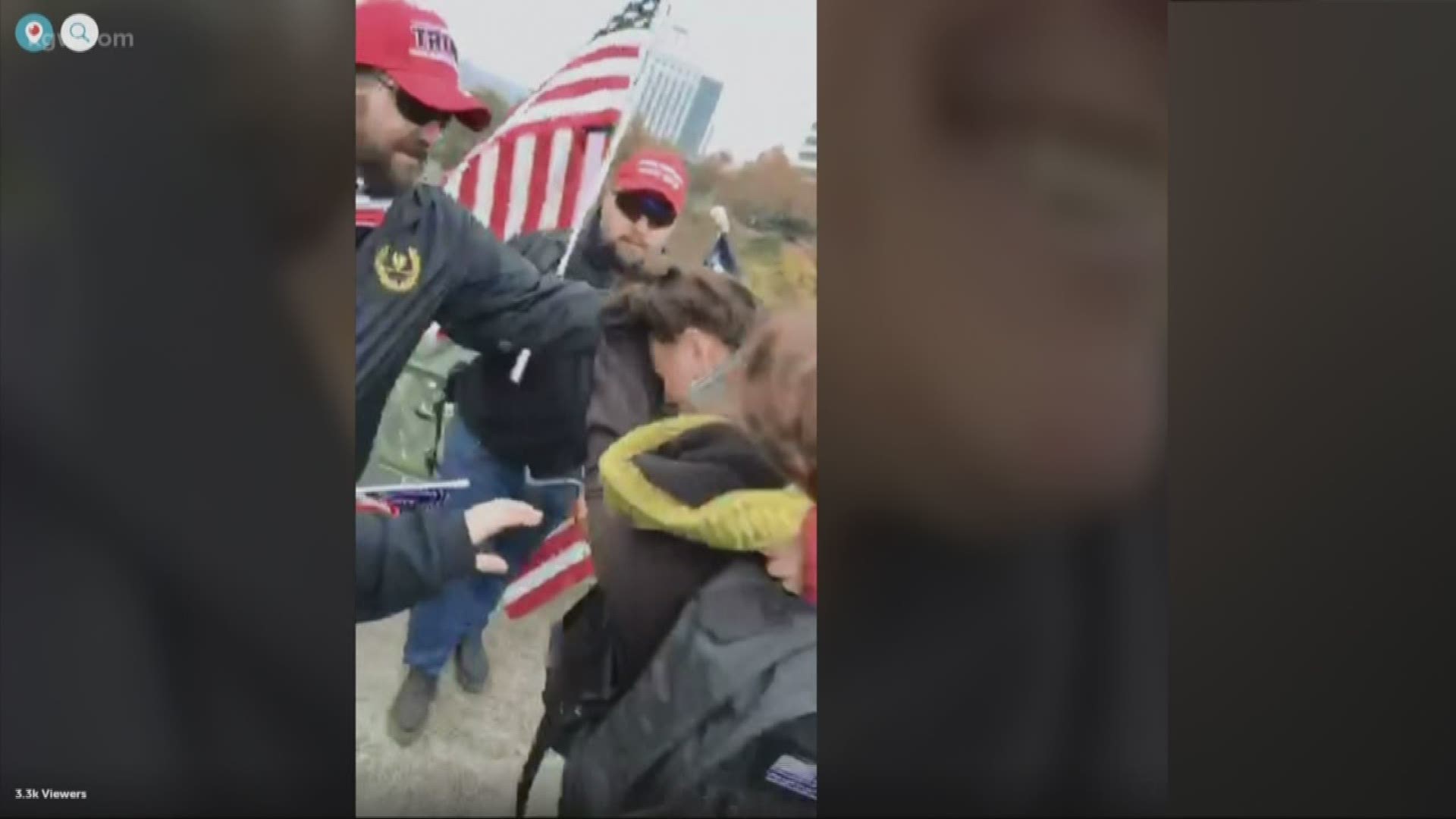 PORTLAND, Ore. — Videos showing a fight in Northeast Portland between a woman and a group wearing symbols for the far-right group Proud Boys are getting a lot of attention on social media.

Police said it happened when the group was waving flags on the 12th Avenue overpass across Interstate 84 Sunday afternoon.

Officers said a woman confronted the group and they got into an argument, which turned physical. They said it is not clear who started the fight.

Tara LaRosa, a professional MMA fighter who was part of the flag-waving group, streamed the incident live on Periscope.

In the video, one person can be seen striking the woman and holding her by her hair while LaRosa yells at them to stop. The video then goes dark as LaRosa puts her phone in her pocket.

The woman can be heard yelling “get off me” and “I can’t breathe.” At one point, someone says “how you like the Proud Boys now?”

The woman identifies herself as a professor in the video. Police have not released her name.

When LaRosa takes the phone out of her pocket, she says she “had to put somebody down” and that a “violent woman got violent.” LaRosa keeps the livestream running as police and medics arrive, and she talks to officers about what happened.

In another video posted on Twitter, LaRosa is seen pinning the woman to the ground. A member of the group accuses the woman of assaulting someone, which she denies.

The woman is also heard saying “you’re antagonizing the city I live in.” LaRosa replies, “No we’re not, we’re doing a flag wave,” and adds “we’re not trying to fight.”

In the livestreamed video, the woman mentions President Trump, and one of the group members says the flag waving is for veterans and does not have to do with Trump.

Neither video shows what led up the fight.

On Twitter, LaRosa wrote that the woman was berating her group, and then attacked another woman. LaRosa said she broke up the fight and held her down until police arrived.

Officers said those involved had minor injuries. Photos posted to Twitter show LaRosa with a bite mark and scrapes.

No one was arrested, but police said they have referred the case to the Multnomah County District Attorney’s Office.

The Southern Poverty Law Center designates the Proud Boys, which formed in 2016, as a hate group.

Their members have a history of clashing with left-wing activists in Portland. During dueling demonstrations on Aug. 17, anti-fascist protesters were seen attacking a bus full of Proud Boys and Patriot Prayer members that was stuck in traffic.

In October, Proud Boys member Tusitala “Tiny” Toese was arrested on felony assault charges stemming from a June 2018 attack in Northeast Portland on a man who yelled “f*** Trump.” Another Proud Boys member was also arrested in that case earlier this year.