The Proud Boys said they would not come downtown but did brawl in Northeast Portland with antifa protesters. 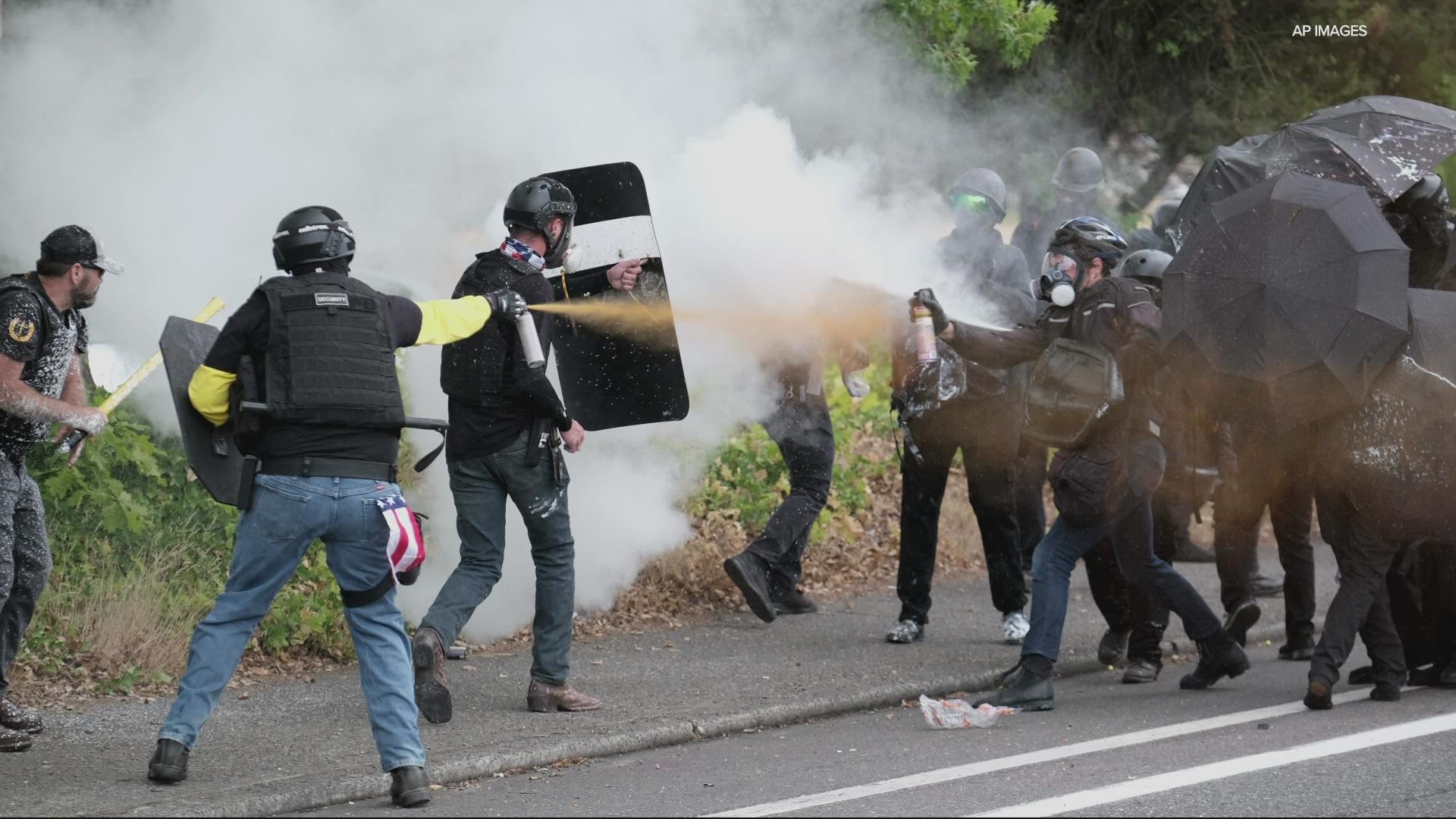 The fighting broke out on Northeast 122nd Avenue near Northeast Shaver Street where videos from journalists at the scene show destruction, violence and the use of explosive devices that look like not only fireworks but other devices as well.

On Sunday, the Proud Boys congregated in the parking lot of a derelict K-Mart to hold a rally where a small stage was set up and members from the group gave speeches.

In downtown Portland at Tom McCall Waterfront Park, a group of various antifa and other left-wing people gathered.

About 200 Anti-fascists (antifa) are gathered in downtown Portland, Oregon to counter a planned far-right rally pic.twitter.com/PKH6qctT35

With the two events separated, things remained peaceful for more than two hours after the events began at around 2 p.m.

At around 4 p.m., the beginning of clashes were being reported by journalists on the scene.

Proud Boys can be seen attacking an "antifa van" by slashing its tires and breaking in its windows. In other videos, Proud Boys are seen chasing after, holding down and beating someone dressed in all black, likely antifa, while another person clad in all black sprays at them with what might be pepper spray. It is unclear who was launching explosive devices.

At 4:55 p.m., freelance journalist Sergio Olmos reported that there was no police presence to be found.

Portland police are nowhere to be seen pic.twitter.com/OrvB3ouE2d

At around 5:50 p.m., Zane Sparling with the Portland Tribune was downtown and caught what appears to be a man shooting a handgun.

Credit: Jake Bevis
Bullet holes in a car following a shooting downtown which occurred following two separate rallies, one for antifa and another for the Proud Boys.

Police arrested 65-year-old Dennis Anderson, of Gresham, for allegedly firing a gun near Southwest 2nd Avenue and Southwest Yamhill street, according to a press release from PPB released Sunday night.

Police said the incident happened around 5:47 p.m. Officers learned of a suspect firing a gun and took Anderson into custody three minutes later at Southwest 3rd Avenue and Southwest Alder Street. Officers took a gun from Anderson as evidence. Police said they have not confirmed whether the incident is connected to the demonstrations.

Police said Monday that investigators have confirmed there was at least one more shooter involved in the incident and officers are seeking help from witnesses to identify them. Investigators believe a group of people was pursuing Anderson shortly before the shooting started and are looking into whether there are any victims or suspects involved in that group. Police are seeking any video from the area that might show the events leading up to the shooting.

According to PPB, there are reports that witnesses may have removed evidence from the scene. Police said anyone who may be a victim, or anyone with evidence of a crime or information about this incident to email crimetips@portlandoregon.gov and reference case number 21-233538.

Police are investigating. Police say they have a man in custody.

The shooting is over, no injuries to report. pic.twitter.com/48avzpHWn6

Olmos reported that approximately 30 minutes after the shooting Downtown, the area was clear of bystanders and police.

The clash, including explosive devices, was originally going on near a Chevron gas station in NE Portland that had innocent bystanders at it. It comes one day after Mayor Ted Wheeler, Portland Police Bureau (PPB) and other leaders held a "Choose Love" press conference, where they publicly denounced hate and hate groups in Portland but would not say if and when police would intervene.

“It's not necessarily the best tactical approach to have officers wading into situations where groups are clashing with each other,” PPB chief Chuck Lovell said on Friday.

This is a different tactic seen following the months of police intervention during protests held in downtown Portland in summer 2020 where police, both PPB and federal, clashed for nearly 100 consecutive nights with protesters.

Portland police sent a press release just before 7:30 p.m. on Sunday stating that there were no immediate arrests but that they were aware of the fighting and the property destruction.

Portland Police Bureau is asking for help identifying victims and witnesses in the following ways:

"While it's disappointing that some people chose to engage violently, I am grateful for those who exercised their rights peacefully and without committing crimes," said chief Chuck Lovell in the press release. "I also thank the Portland Police personnel who came into work today on their day off, and those who were responding to calls for service citywide."

Mayor Wheeler released a statement on Monday that claimed he and PPB "mitigated confrontation between the two events and minimized the impact of the weekend's events to Portlanders." This statement comes despite the fighting and property destruction that broke out at and near a Chevron gas station in NE Portland.

The statement went on to say, in part:

Police monitored both events - at the waterfront downtown and at NE 122nd and Sandy -  throughout the day. Officers were within minutes of both locations, ready to take action immediately if the situation worsened and life safety was jeopardized. Police officers were able to take action immediately. One example was late Sunday afternoon when Central Precinct officers responded to a report of shots heard in the area of SW 2nd Ave and SW Yamhill St. Three minutes after learning of the incident, officers located the suspect and made an arrest. There was also an incident at NE 122nd and Sandy in the late afternoon that police monitored, but they did not deploy officers into the situation. During this event, police observed criminal conduct and violent behavior and detectives will make arrests when probable cause can be established.