Portlanders have been protesting for 100 days. 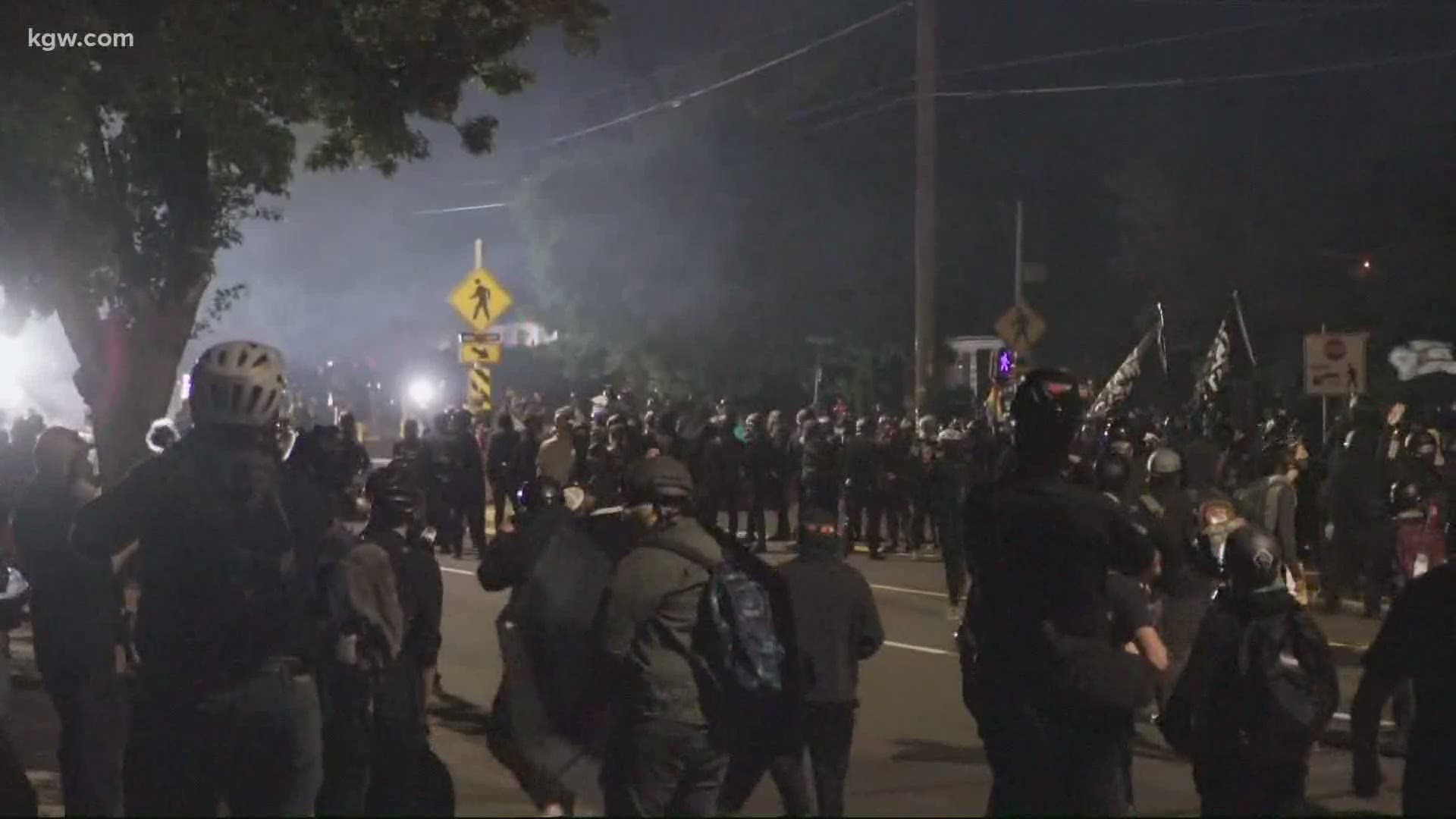 PORTLAND, Ore. — Portland entered its 100th night of protests following the death of George Floyd, a Black man in Minnesota who died after a police officer knelt on his neck for nearly eight minutes.  The protests have been concentrated largely around different areas in downtown from the Federal Courthouse to the Police Association Building.

Saturday, there were several well-publicized demonstrations across the city including a car rally and more traditional events at neighborhood parks. One of which included a planned march to the Portland Police Bureau's East Precinct. The direct action rally began at 7 p.m. at Ventura Park. It was promoted as a sit-in and march for Black lives. There were speakers and a small concert before protesters began marching.

Night 100 of #BlackLivesMatter #PortlandProtests sees several hundred people at Ventura Park listening to speakers. The current speaker is about to read a poem. It's a good one. pic.twitter.com/bnPmtL7m3C

At around 9 p.m. protesters began marching to the East Precinct. Portland police tweeted that it was making announcements over the loudspeaker to remind people to march on sidewalks and not block the street.

The group has formed at the eastern most part of Ventura Park and are now marching. They are heading west down Stark. pic.twitter.com/Y0NlIn0DWr

Not long after the march began reporters captured video of aggressive incidents. Reporter Cory Elia captured video of Molotov cocktails being thrown. There also appeared to be large fireworks thrown. Shortly after that media members on the scene said that Portland police declared a riot and deployed tear gas.

A molotov cocktail was thrown pic.twitter.com/rCqQa6ydgm

According to reporters at the scene, Oregon State deputies were there along with local law enforcement. Justin Yau reports that three petrol bombs were thrown. In his Twitter video, you can see someone running with their feet on fire.

Reports of Molotov cocktails were also seen on videos posted to Twitter by people at the scene.

A molotov cocktail was thrown pic.twitter.com/rCqQa6ydgm

At around 9:10 p.m. reporters said that most of the protesters had been dispersed from Stark Street and headed down a residential neighborhood street.

At around 10:53 p.m. following the police dispersal on Stark Street, the crowd dwindled some but a couple hundred remained.

Reports of mass arrests in the street during the riot were reported by several journalists. In all Portland Police report arresting 59 people, one carrying a dagger, another a knife. Police also reported that commercial-grade fireworks were launched by people in the crowd and that one officer was injured by the munitions.

More people are being detained tonight by Portland Police and Oregon State troopers.

Unclear if people are being brought here pic.twitter.com/qHhuHi919w

I’ve lost count of how many protesters have been brought to this random residential street in Portland to be loaded into paddy wagons.

One protester called out “I love you” to their partner pic.twitter.com/M6YaJACTLm

A separate vigil was held at Waterfront Park for the last 100 Black people who lost their lives to police brutality in the United States. The event began at 8 p.m. Saturday.

A Black Lives Matter protest was held from 12 p.m. - 6 p.m. at Lents Park to mark the 100th day of protests in Portland.

Saturday also saw a car caravan in support of the Black Lives Matter movement that originated at Portland Community College. The caravan event is part of a twice-weekly rolling protest scheduled every Wednesday and Saturday in September. Each event will start in different places in the city and surrounding areas.

On Friday night, during the protest, police declared an unlawful assembly, but not a riot.

The unlawful-assembly declaration was made at 11:45 p.m. after Police had previously told protesters to clear the road outside the Portland Police Association (PPA) headquarters in North Portland. Police said demonstrators threw rocks and water bottles at officers.