A crowd of about 300 people marched from Revolution Hall through the streets of Southeast Portland. Law enforcement said no violence was observed. 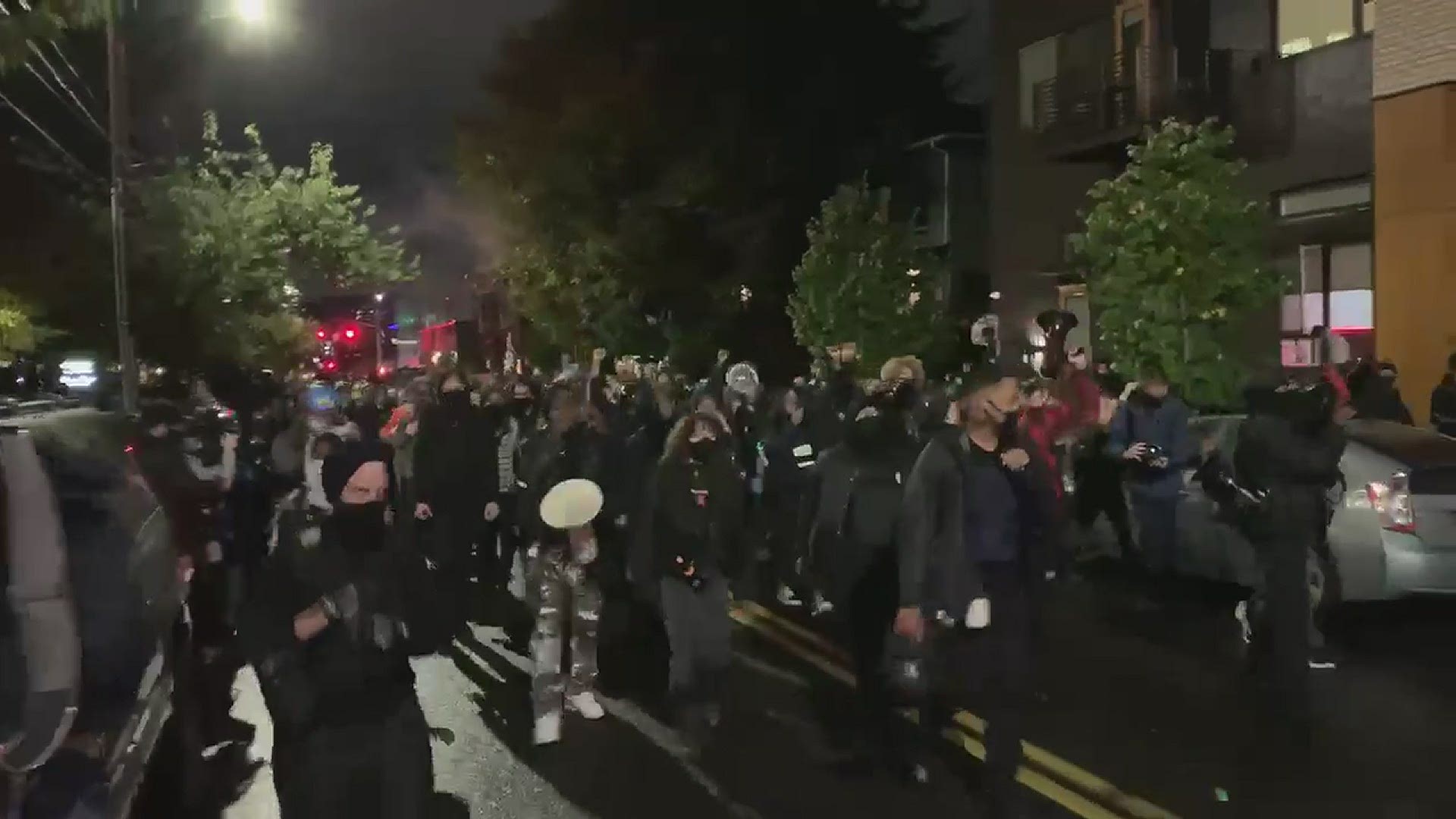 PORTLAND, Ore. — A gathering described as a "Unity March" took place on election night in Portland.

Demonstrators began gathering in Southeast Portland at Revolution Hall on Tuesday around 5 p.m. The crowd chanted the names of Black people killed by law enforcement.

Journalists on the scene described people chanting in the streets as they marched.

Estimates from journalists in the crowds said hundreds of people marched from Revolution Hall through Southeast Portland.

The Multnomah County Sheriff's Office (MSCO) provided an 8 p.m. update as voting in Oregon officially closed for voters to drop off their official ballots at drop-off locations in Portland.

Just before 8 p.m., people marching could be heard chanting about racial injustice with seemingly little focus on the presidential election as seen in a video posted by Oregon Public Broadcasting journalist Sergio Olmos.

During the 9 p.m. update, MCSO, on behalf of the "unified command" with Oregon State Police (OSP), said several hundred people were continuing their march down Belmont Street heading east. Law enforcement also said several people in the group were seen openly carrying firearms. The sheriff's office asked people to stay on the sidewalks and avoid blocking streets or traffic. Drivers in the area were cautioned to avoid the area.

Sometime after 10 p.m., people in the crowd spray painted graffiti on Central Catholic High School while marching past it.

Some protesters vandalized Central Catholic High School while marching past it. pic.twitter.com/xwGqykMBgj

According to Zane Sparling with the Portland Tribune, marchers headed back to Revolution Hall while singing the song "Hallelujah." Speeches were held at the hall and speakers asked demonstrators to stay and listen. 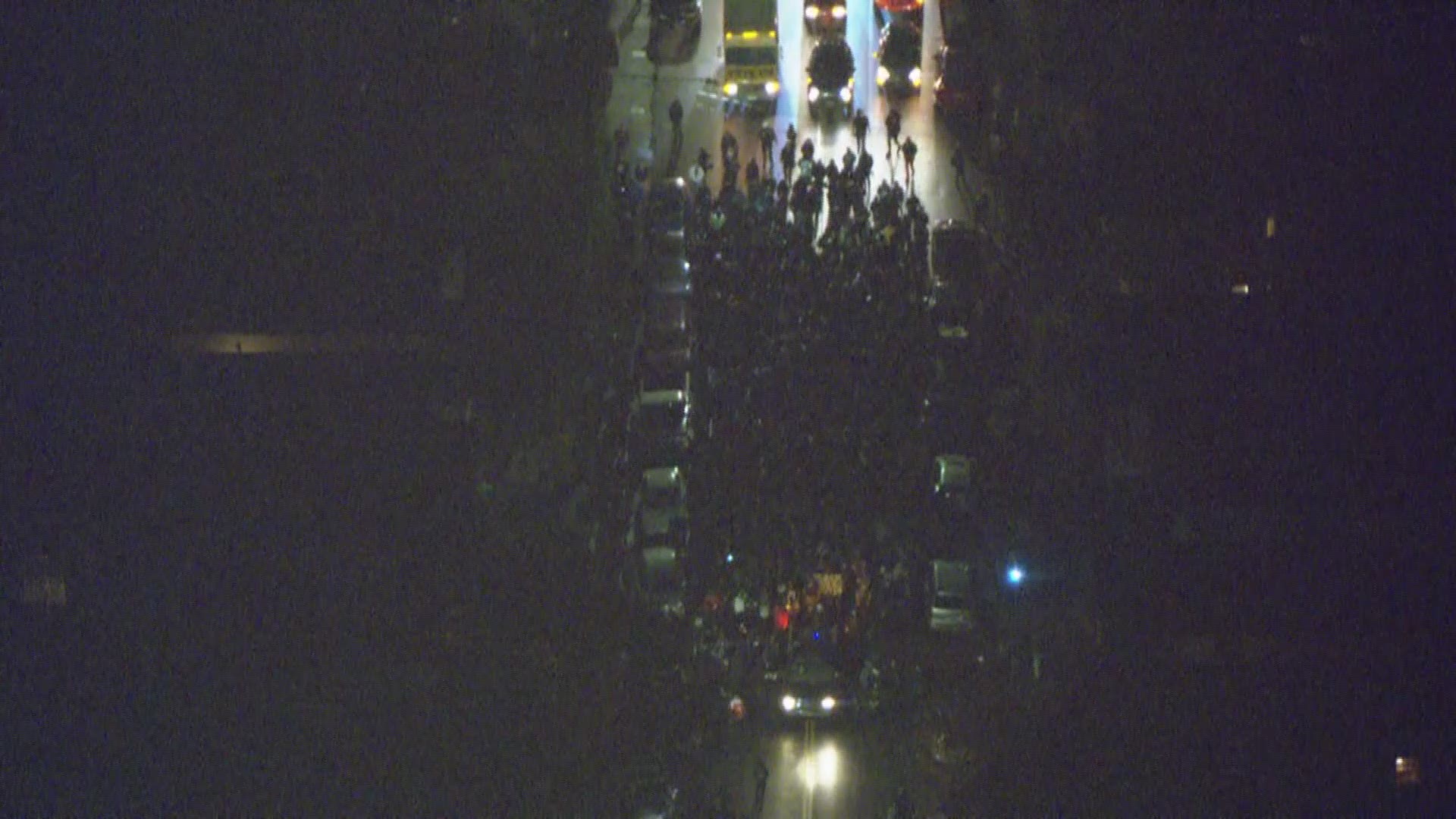 MCSO said during its 10 p.m. update that they observed about 300 people marching on Southeast Belmont Street and said the group moved north on Southeast Cesar E. Chavez Boulevard. Law enforcement said there were no threats of violence and the march was peaceful. Crowds walked through Southeast Portland’s Buckman and Sunnyside neighborhoods for more than three hours. The group returned to Revolution Hall by 11 p.m. where the march began and continued listening to speeches there.

Sometime after midnight, a small group from the march left Revolution Hall and began to gather at the Multnomah County Justice Center on Southwest 3rd Avenue. Sergio Olmos, with OPB, posted a photo where a fire had been started. Reports from other journalists there said an American flag was set on fire as well.

Some protestors are gathering outside the justice center/ federal courthouse pic.twitter.com/XteumfcqDJ

After 12:30 a.m., independent journalist Cory Elia said witnesses were reporting windows being broken inside the justice center. Police were observed on scene but did not appear to make any arrests or intervene.

In a final update at 2:14 a.m., the MCSO said online in a tweet, "After the march concluded at Revolution Hall on Tuesday night, 75-100 people gathered outside the Justice Center in Downtown Portland. They dispersed several hours later."

The MCSO and OSP are working together as a "unified command" to keep the peace and address potential violence in Portland this week. The unified command asked the marchers at Revolution Hall to not block city streets as there has been no permit issued for a march Tuesday night.

"Our joint law enforcement efforts will focus on supporting lawful engagement in free speech and assembly and also addressing criminal acts that decrease the safety of our community," a press release said.

Police declared a "direct action event" an unlawful assembly on Monday night after several people threw rocks and smashed windows at buildings on the Portland State University campus. PSU President Stephen Percy said five buildings on campus, including the public safety office, were damaged during a period of about 20 minutes.

The MCSO said officers interrupted a possible arson attempt when some individuals in the group poured flammable liquid inside a Starbucks. Two people were arrested.

Another march is expected to take place at Revolution Hall today at 3:00 p.m.

The march is being organized by the Defend Democracy Coalition which includes more than 40 community organizations in Portland and the Pacific Northwest.