Following a destructive night of protests, demonstrators met again on Wednesday night, this time at Elizabeth Caruthers Park, and marched to the ICE building. 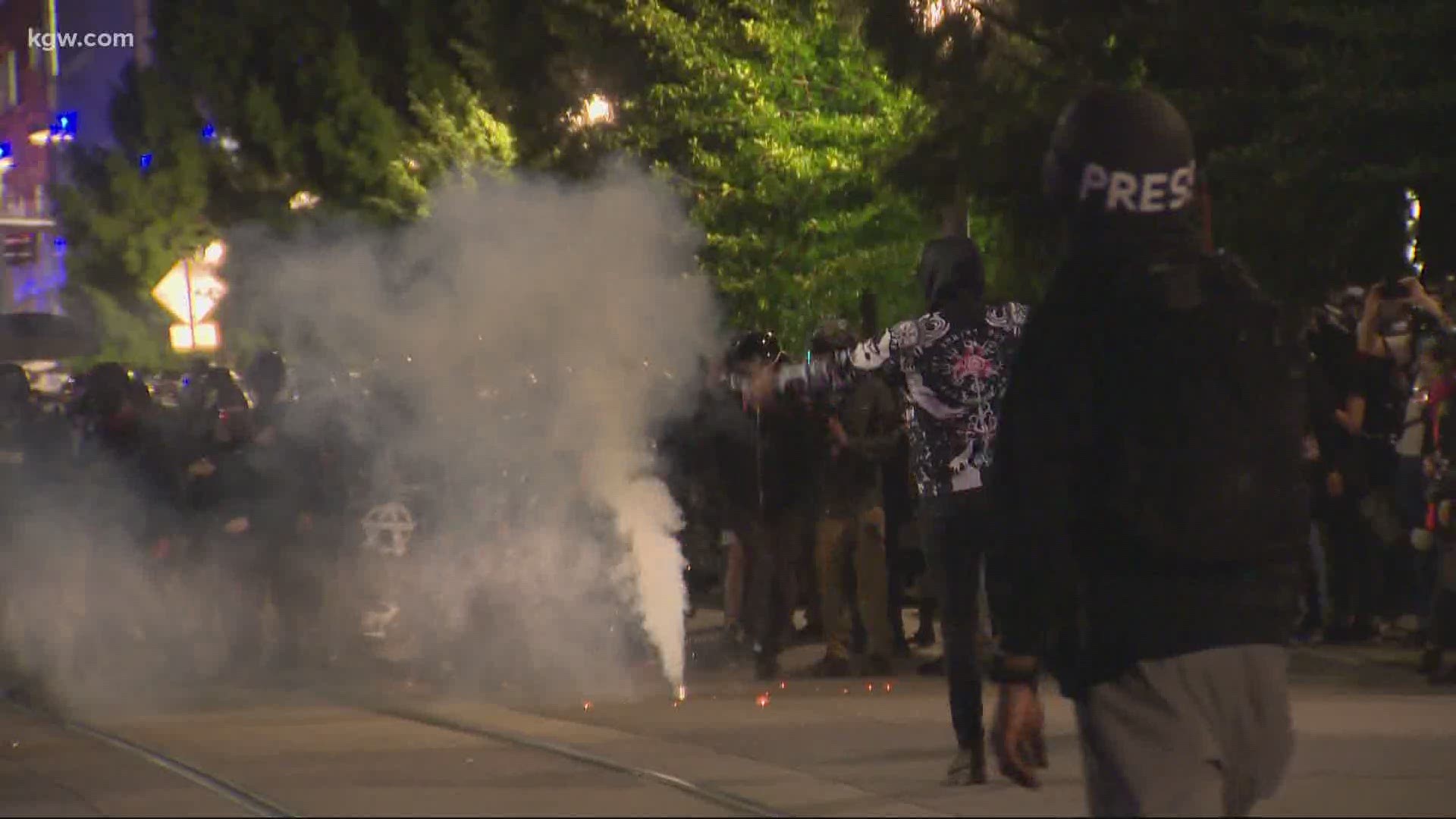 PORTLAND, Ore — Following a destructive night of protests, demonstrators met again on Wednesday night. The nightly protest began at Elizabeth Caruthers Park in South Portland. The group marched to the Immigration and Customs Enforcement building, where the gathering was declared a riot by Portland police around 11 p.m.

Some members of the group threw rocks the size of softballs, glass bottles and other items, injuring some officers, according to a press release from Portland police. Some in the group also vandalized and broke windows at the ICE building. Others started a fire in the middle of an intersection at South Gaines Street and Bond Avenue.

Police said officers fired tear gas and other munitions at the crowd during dispersal efforts. Two people were arrested.

This is the 12th straight week of nightly protests in Portland following the killing of George Floyd.

Around 9:20 p.m., the group left the park and began to march to the ICE building on South Macadam Avenue, according to a tweet from Garrison Davis.

Sergio Olmos tweeted that people were near the doors of the building and some tried to open them. Federal agents, who are assigned to protect the building, gave a warning to the crowd.

Protestors are near the doors of the building, trying to open them. Federal protective service have already given a use of force warning pic.twitter.com/oSY9PSNHC4

Around 10 p.m., federal agents declared the gathering an unlawful assembly after some members of the group damaged and broke windows at the building.

Federal agents came out of the building in full riot gear with shields drawn and carried less-lethal rounds.

After an initial confrontation, where federal officers fired less-lethal munition at the crowd, DHS officers remained outside and pushed people away from the building.

Around 10:45 p.m., the crowd returned to the ICE building, Davis tweeted.

A KGW photographer saw officers again push people away from the building with impact weapons drawn. Over a loudspeaker, Portland police told the crowd to leave the area.

Close to 11 p.m., Portland police declared a riot and told the crowd to leave immediately. Videos on social media showed officers pushing members of the crowd and sometimes "bull-rushing" the group as everyone moved north.

Two arrests were made:

On Tuesday night, some people broke windows and started fires at the Multnomah Building in Southeast Portland.

Officials Wednesday said enough is enough. Multnomah County Chair Deborah Kafoury and Sheriff Mike Reese both appeared in a news conference via Zoom and expressed support for the ideals behind the Black Lives Matter movement. But both drew the line at the type of destruction and violence that has been on a regular late-night basis in Portland recently.

Kafoury also noted that previous damage costs to the county Justice Center and Central Courthouse is already at $1.3 million over the course of the protests in Portland.

Sheriff Reese said destruction is serving no one.

RELATED: 'We must work to build and not destroy': County officials decry riot, fire at Multnomah Building

RELATED: What will it take to stop violent protests in Portland?