Malik Muhammad came to Portland after making headlines for de-escalating a tense stand-off by hugging a police lieutenant in Indianapolis. 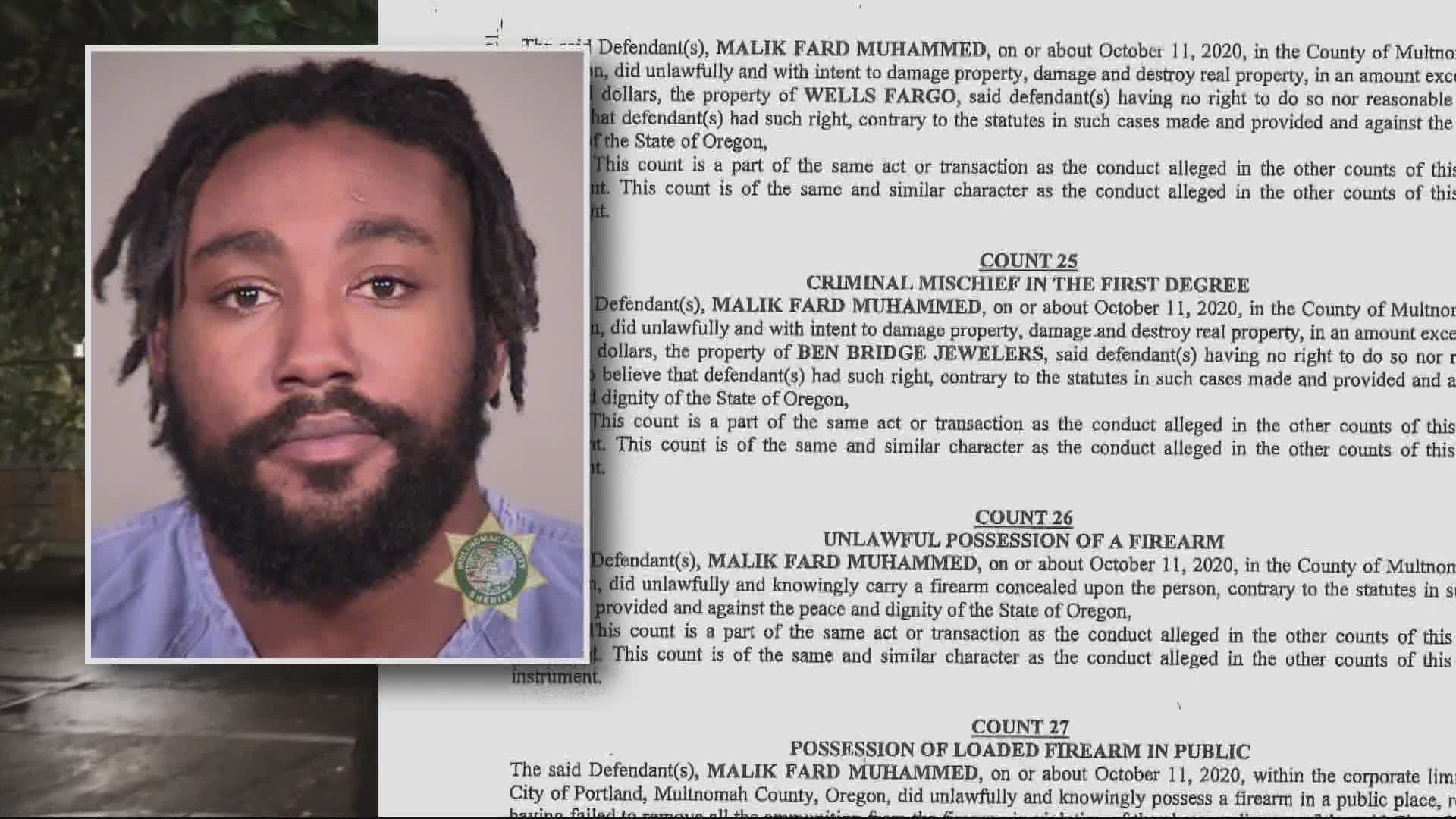 PORTLAND, Ore. — An Indiana man is facing the most serious charges yet related to last summer’s violent protests in Portland. Malik Muhammad, 24, is charged with two counts of attempted aggravated murder and other crimes, according to court records.

Records indicate Muhammad was booked into jail in Marion County, Indiana on Friday. He is awaiting extradition to Oregon, where he will face felony charges.

Several agencies, including the Portland Police Bureau, Indianapolis Metropolitan Police and the FBI were involved in the months-long investigation.

According to a law enforcement source, the attempted aggravated murder charges stem from two separate incidents in which Muhammad is suspected of throwing lit Molotov cocktails at police officers.

The first of the incidents occurred on Sept. 21, according to law enforcement.

A Portland police press release following the Sept. 21 incident described how someone in a crowd of demonstrators threw a lit Molotov cocktail toward the Penumbra Kelly police building on Southeast Burnside. The fire was extinguished, and no one was hurt.

According to court documents filed by prosecutors, a plainclothes FBI agent in the protest saw Muhammad throw the burning yellow bottle towards police. Investigators later determined the bottle was full of a flammable liquid.

Prosecutors said they found DNA evidence on the bottle that was an "extremely strong comparison" to Muhammad. They also used a price tag still attached to the bottle to find surveillance video of Muhammad purchasing it at a Goodwill store.

Muhammad is also accused of using a metal baton to smash out windows at the Oregon Historical Society, Portland State University and other businesses during an Oct. 11 riot in downtown Portland, according to court records. An undercover FBI agent said they watched Muhammad break the windows.

Prosecutors had originally charged Muhammad with possession of a loaded gun in public, unlawful possession of a gun, first-degree criminal mischief and riot stemming from the Oct. 11 incident.

The charges were dismissed on Feb. 10 but were reinstated today along with the more serious attempted aggravated murder charges.

At the time, prosecutors said Muhammad had just moved from Indiana to the Portland area. Jail records suggested he was homeless.

Muhammad waived extradition during a brief court appearance in Indiana on Monday. He seemed taken aback by the new charges after being arrested on Friday.

"These charges are completely brand new to me," he said during court. "They had a slew of other trumped up charges that they just recently dropped and then all of this happened.” He could not be reached for additional comment.

Muhammad travelled to Portland to participate in protests, said his mother Lori Muhammad.

Muhammad helped organize various rallies in Indianapolis last summer against racial injustice and police use of force, according to press reports.

Muhammad made headlines after helping to defuse a tense standoff between police and demonstrators in Indianapolis by hugging a police lieutenant on June 1.

“I never in a million years thought I would embrace a cop like that,” Muhammad said afterward.

RELATED: Officers march peacefully with protesters outside the governor's residence

Days after the exchange, Muhammad had a private meeting with Indiana governor Eric Holcomb to discuss police reform.

“That was him!” said Muhammad’s mother, reached by phone in Indiana.

Public records indicate Muhammad is an Army veteran. He has no prior criminal history.

Since May, Portland police have referred more than 1,000 protest cases to the Multnomah County District Attorney’s Office; 81 percent of those cases have been rejected. Multnomah County DA Mike Schmidt has said he would not pursue non-violent, low-level charges against protesters.

Schmidt said his office would focus on more serious protest-related crimes like assault and other offenses against people.