Police say one person set fire to a piece of plywood on the front door of the building and another tried to set fire to an awning. 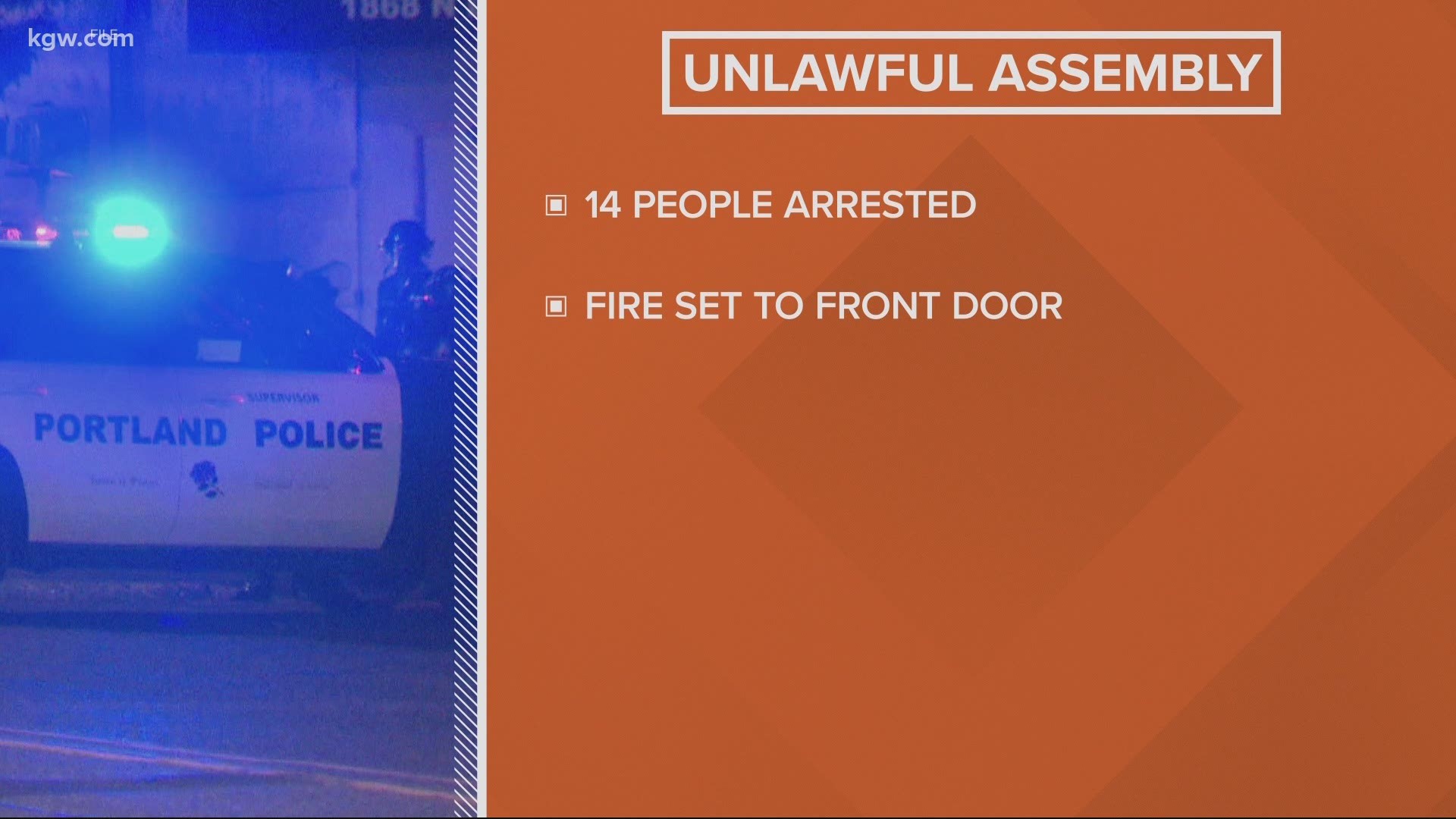 The Portland Police Bureau (PPB) made the declaration shortly before 10:30 p.m. and ordered people to leave the area. PPB threatened arrest or use of force if protesters didn't disperse.

Video from journalist Justin Yau showed a small fire burning along the side of the union building, which PPB said was a piece of plywood on the building's front door that a member of the group set on fire. Police said another person tried to set fire to an awning and a third person hammered on the front door, trying to break in.

Police say officers began to disperse the crowd, made several arrests and then disengaged. Many members of the group stayed in the area. Police made a targeted arrest at 11:12 p.m., after which police say officers again disengaged. Police say some members of the group climbed onto the roof of the police union building at around 11:30 p.m., at which point officers returned to the building and made more targeted arrests.

A flame has just been lit on the door of the PPA building. Portland Police has just declared an unlawful assembly, ordering crowds to disperse. #PortlandProtests #PDXprotests #BlackLivesMatter pic.twitter.com/2ie3br62nD

One of the 14 arrests, Sophia Kalsta-Watkins, was charged for setting the wooden boards on the outside of the Police Union building on fire.

The protesters were calling for the total abolition of police and prisons. They met at Arbor Lodge Park before marching to the Portland Police Association (PPA) building, which serves as headquarters for the bureau’s police union. The building, located on North Lombard Street near North Campbell Avenue, has been the site of previous clashes between officers and demonstrators.

The violence Wednesday night came after hundreds gathered to demand justice for Breonna Taylor, a Black woman who was shot and killed by police inside her Louisville, Kentucky home earlier this year.

Protests in Portland over racial injustice and police brutality resumed last week after a brief hiatus due to wildfires across the state blanketing the city in smoky and unhealthy air conditions. Prior to that, there had been more than 100 consecutive nights of demonstrations, many of which ended with clashes between police and protesters, following the police killing of George Floyd, a Black man, in Minneapolis.