‘Deliberate attack on a journalist’: Police accused of being too aggressive during Portland protest

Photojournalist John Rudoff said officers shoved him to the ground while he tried to take a photo of a violent arrest. 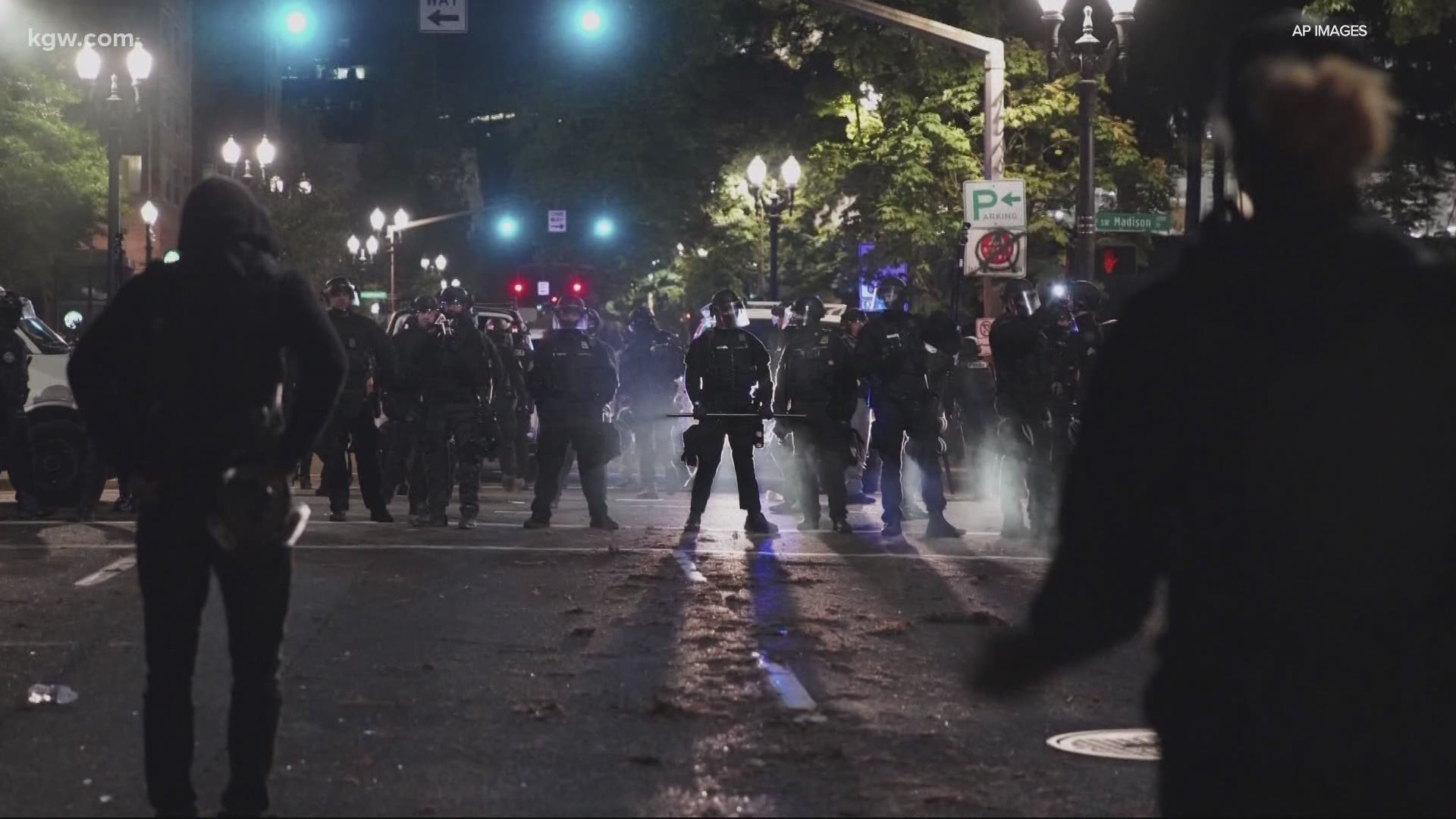 PORTLAND, Ore. — Police arrested about 30 people during demonstrations throughout Saturday. Many of those arrests happened at night in downtown Portland, and police are facing criticism that they were too aggressive in their response.

Saturday was filled with demonstrations. During the day, they were for the most part nonviolent. But that changed in the evening hours. Videos on social media show people, including journalists, being shoved.

John Rudoff, a photojournalist in Portland, was downtown Saturday. Over the years he’s covered various protests alongside other journalists and reporters.

“I am a full-time photojournalist. I am not an activist,” said Rudoff.

If you search Rudoff’s name on the Associated Press Images website, you’ll find his photos. He said he’s spent 48 nights covering the protests in downtown Portland and he was out again Saturday night covering the demonstration in front of the Multnomah County Justice Center. He saw officers making an arrest.

“I moved towards that arrest, which was quite violent, to start covering it to start shooting it. I do stills, not video. I started to kneel down to get a ground level shot,” he said.

That’s when Rudoff said officers shoved him to the ground. Another reporter with The New York Times posted a video to Twitter showing what happened.

Aggressive arrests, baton jabbing and knocking a photographer to the ground. pic.twitter.com/OXdGhfOs3k

“Just shoved me backwards on my left shoulder so fast that I went straight over backwards without a chance to guard my fall,” said Rudoff.

He hit his hip, torso, and his head. Rudoff said he’s OK aside from a bruised hip, but if he hadn’t been wearing his helmet, he might’ve sustained worse injuries.

He was also wearing body armor with multiple, visible labels that identified him as press.

“I have press on all four surfaces on my helmet. I have press for and aft on my body armor. I have a large 4x6 press credential hanging around my neck on a red cord and I have two large professional cameras,” Rudoff said.

He is one a of a number of people who feel police were too aggressive.

“It was a focused, deliberate, very quick but deliberate attack on a journalist to prevent him from getting an image of what was going on, which the public has a right to know,” he said.

“They certainly have a right to know without being fed a narrative and that’s what I do," Rudoff said. "What frightens me as much as the aggression of the arrests is the gradual and escalating choking-off of the flow of legitimate images and information from journalists.”

Since this story aired, the City of Portland’s Independent Police Review announced on Twitter that it is, “aware of video footage circulating on social media that shows an officer grabbing a press photographer and throwing him to the ground during a protest on the night of September 26, 2020. IPR has opened an investigation into this incident.” While the Twitter post did not name Rudoff, it appears to line up with Rudoff's account of his experience.

IPR is aware of video footage circulating on social media that shows an officer grabbing a press photographer and throwing him to the ground during a protest on the night of September 26, 2020. IPR has opened an investigation into this incident.

Another video from Saturday night shows a man displaying his middle finger to a police officer. That's when he gets a face full of what appears to be pepper spray.

The reports prompted Gov. Kate Brown to tweet a statement saying, “Free speech and free press are two of my core values. I take the use of physical force by law enforcement officers seriously, whether it involves members of the public or the media."

Now the ACLU of Oregon is getting involved.

“We made the call on Governor Brown to use her authority to appoint a special prosecutor to start investigating the significant serious and repeated abuses that we’ve seen over the last several months,” said Kelly Simon, the interim legal director for the ACLU of Oregon.

Simon said the ACLU of Oregon has seven active cases against the Portland Police Bureau (PPB) and other law enforcement. In fact, she said Rudoff is a client in one of their active cases. He is listed as one of the plaintiffs in a class-action lawsuit that was filed against the City of Portland and police for “targeting and attacking” journalists and legal observers who were at protests in Portland over the death of George Floyd, an email from the ACLU said back in late June.

Portland police said on Saturday night demonstrators were throwing objects at them, like full beverage cans, firecrackers, and rocks. Police said they also repeatedly warned people to get out of the street, but they didn't listen. An unlawful assembly was then declared.

PPB said it is reviewing information from the weekend and it would not comment at this time because of the court case.

“I’m astonished at the level of aggression,” said Rudoff.

“The Washington Post says it very clearly: democracy dies in darkness. It is that simple,” he said.

Before Rudoff became a full-time photojournalist, he had a career as a cardiologist as well as a career in humanities. In 1965, he said he attended the Newhouse School, a journalism school at Syracuse University, and now he said he's come back full circle to journalism.