This weekend saw thousands of people demonstrating for racial justice, followed by overnight clashes between federal officers, police and protesters. 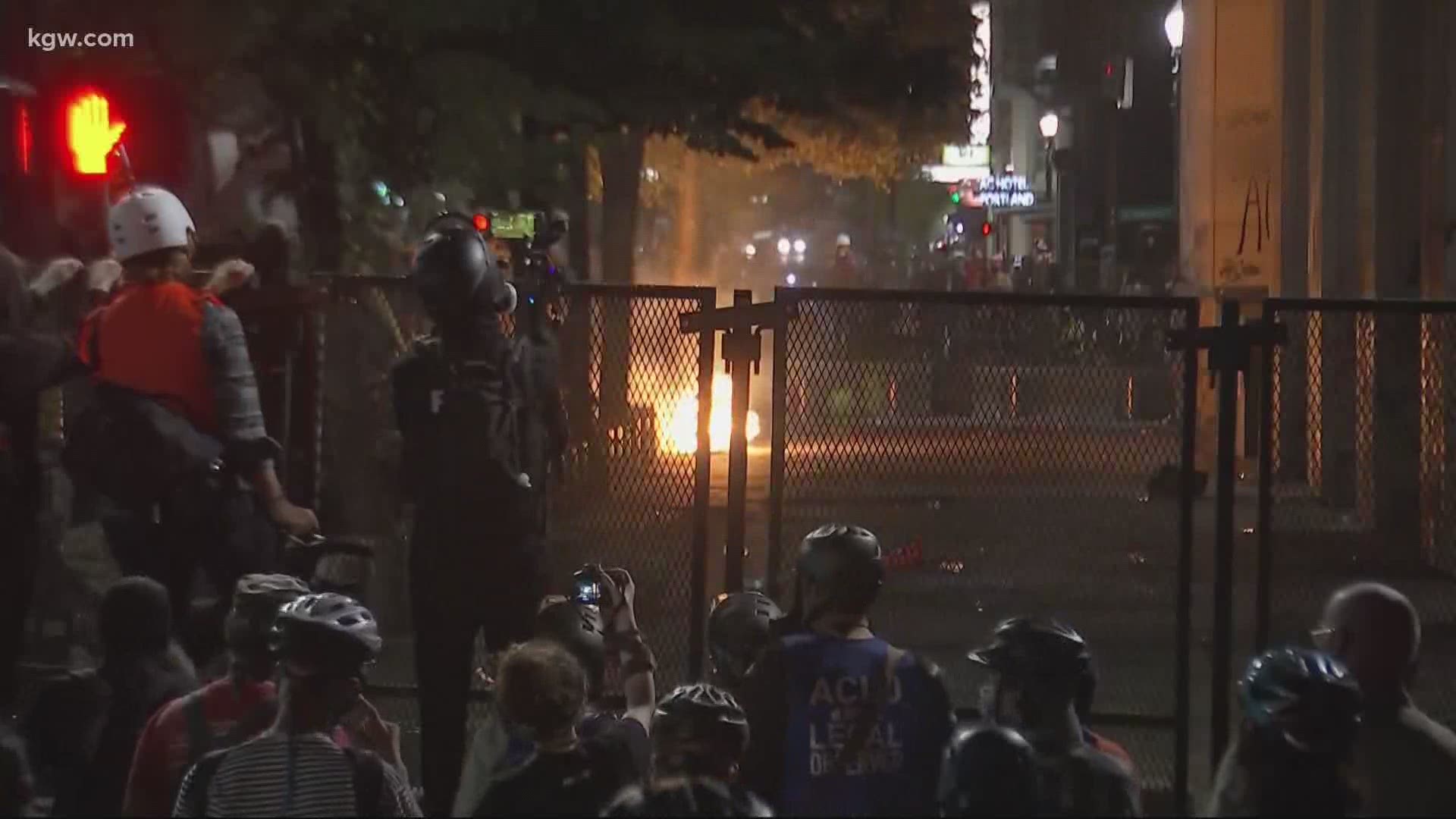 PORTLAND, Ore. — Protests continued Monday night and early Tuesday morning in downtown Portland with hundreds of demonstrators converging on the area of the Multnomah County Justice Center and federal courthouse.

After dark, a fire, of what appeared to be cardboard signs and plywood, was burning near the federal courthouse.

Around 10:15 p.m., federal agents announced their first warning of the night to the crowd in response to banging on the fence, Portland Independent Documentarians tweeted.

Around 11:25 p.m., a fire behind the fence that is around the federal courthouse grew large enough in size to prompt an announcement from federal officers, according to several freelance journalists reporting from the scene.

The fire behind the fence has grown in size and it has triggered an announcement by federal officers. It's hard to hear what is said over the noise of the crowd. pic.twitter.com/lrKkKX3k75

Portland police said members of the crowd continued to launch fireworks and throw rocks and bottles toward the courthouse. Someone threw a Molotov cocktail at the courthouse around 12:12 a.m.

Portland police took a minor from Gresham into custody after reports that people were walking down the middle of a street downtown throwing things at passing cars.

The protests have been ongoing since the killing of George Floyd two months ago. And while the focus remains on fighting for racial justice and police reform, protesters over the last few weeks have also called for the removal of federal officers who arrived in Portland at the beginning of the month.

The presence of federal officers, who have been tasked with protecting federal property, has escalated tensions between protesters and law enforcement. Since federal agents showed up in Portland, many more protesters have shown up in opposition.

Twenty-two people were arrested over the weekend and face federal charges, according to U.S. Attorney Billy Williams. That appears to be in addition to the 60 people who had been arrested or detained since early July, when federal officers arrived in Portland, up until last weekend.

There were also several confrontations captured on video, including a Vietnam veteran being pepper-sprayed by federal officers.

“The cop just snuck up from behind me and just hit me directly in the eyes. I mean it was a direct hit,” said Richard Hastie, 75, of Portland.

Demonstrators from the Wall of Moms group and Don’t Shoot Portland filed a federal lawsuit in Washington D.C. on Monday against the U.S. Department of Homeland Security arguing federal officers are violating their free speech, using excessive force and overstepping their authority.

The ongoing nightly clashes prompted Portland Mayor Ted Wheeler and Commissioner Jo Ann Hardesty to request a meeting with the Department of Homeland Security leadership “to discuss a ceasefire and removal of heightened federal forces from Portland.” The request comes as reports from Oregon Public Broadcasting and the Washington Post indicate more federal officers are on their way to Portland.

Earlier on Monday, Wheeler and five other mayors from across the country sent a joint letter to Congress on Monday, asking congressional leaders to enact legislation restricting the deployment of federal officers to their cities.