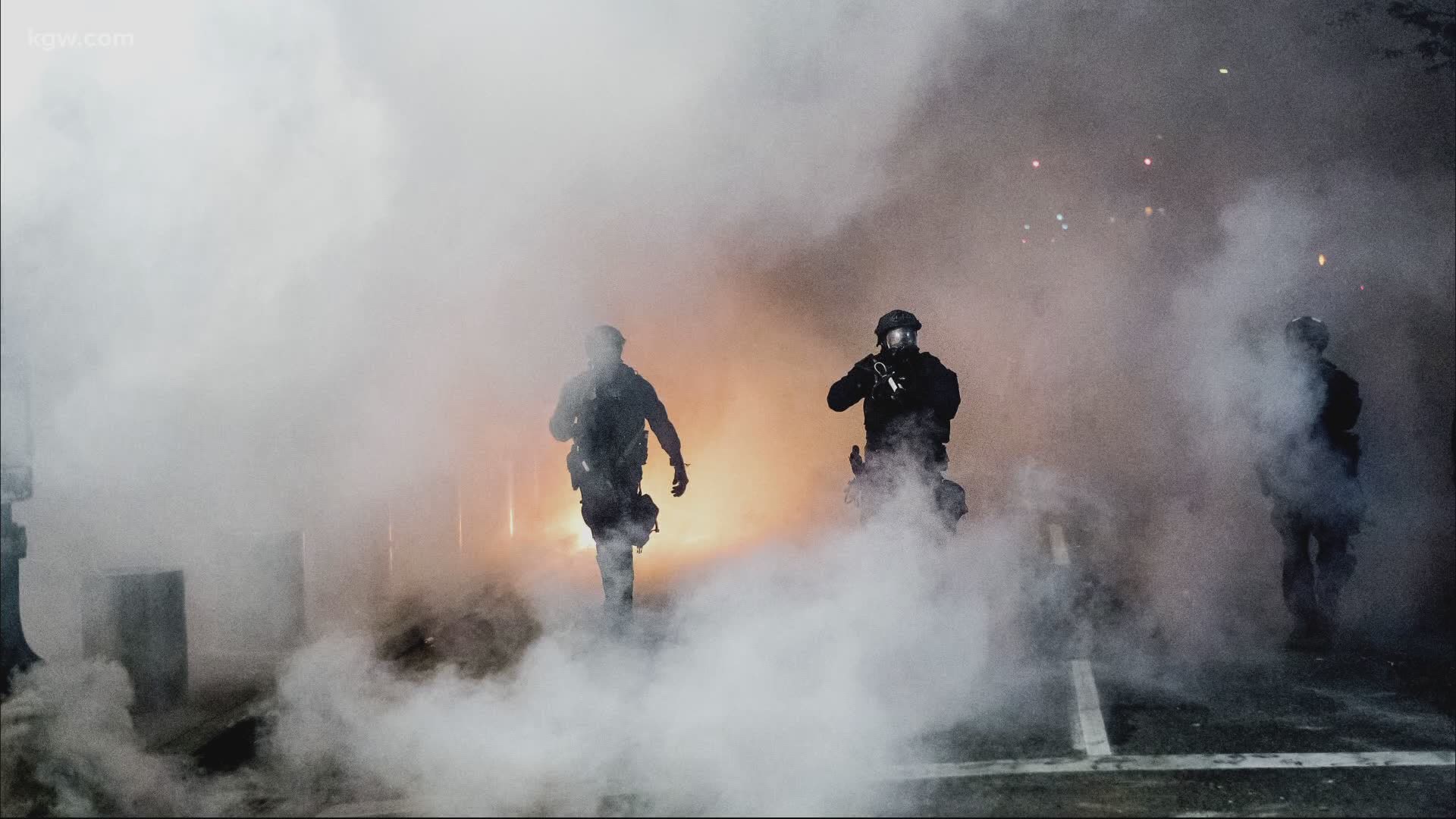 PORTLAND, Ore. — Mardy Widman has watched protests against racial injustice unfold in her hometown of Portland, Oregon, for more than seven weeks but stayed away because, at age 79, she feared contracting the coronavirus.

But that calculus changed for Widman when President Donald Trump sent federal law enforcement agents to the liberal city to quell violent demonstrations — a tactic he's said he'll use for other cities as well. On Monday, a masked Widman was in the street with more than 1,000 other Portlanders — a far larger crowd than the city had seen in recent days, as it entered its eighth week of nightly protests.

“It’s like a dictatorship," Widman, a grandmother of five, said, holding up a sign that read: “Grammy says: Please feds, leave Portland.”

“I mean, that he can pick on our city mostly because of the way we vote and make an example of it for his base is very frightening," she said.

Far from tamping down the unrest, the presence of federal agents on the streets of Portland — and particularly allegations they have whisked people away in unmarked cars without probable cause — has given new momentum and a renewed, laser-sharp focus to protests that had begun to devolve into smaller, chaotic crowds. The use of federal agents against the will of local officials has also set up the potential for a constitutional crisis — and one that could escalate if Trump sends federal agents elsewhere, as he says he plans to do.

Federal forces were deployed to Portland in early July, and tensions have grown since then: first, on July 11, when a protester was hospitalized with critical injuries after a U.S. Marshals Service officer struck him in the head with a round of what’s known as less-lethal ammunition.

Then, anger flared again over the weekend after video surfaced of a federal agent hitting a U.S. Navy veteran repeatedly with a baton while another agent sprays him in the face with pepper spray. Principal Deputy Director of the Federal Protective Service Richard Cline said at a news conference Tuesday that the officers were members of the U.S. Marshals, and the Department of Justice inspector general is investigating.

Crowds had recently numbered fewer than 100 people but swelled to more than 1,000 over the weekend — and they are once again attracting a broader base in a city that's increasingly unified and outraged.

Federal agents again used force to scatter protesters early Tuesday and deployed tear gas and rubber bullets as some in the crowd banged on the doors of the Mark O. Hatfield Federal Courthouse and attempted to pull plywood off the shuttered entryway. The courthouse, which has been a focus of protests, is now covered with graffiti and boarded up, with only thin slits in the plywood to be used as peepholes.

The Portland Police Bureau said in a statement that some protesters lit fires in the street and tried several times to light fires at the courthouse doors.

“It is time for the Trump troops to go home and focus their attention on other activities,” Oregon Gov. Kate Brown, a Democrat, said on MSNBC.

“This is coming from an administration that has deployed secret police to abduct people into unmarked vehicles," Brown told KGW Tuesday afternoon. "This is a democracy, not a dictatorship. If the Trump administration was really interested in problem solving or public safety, they would be focused on reducing the confrontation and retraining their officers. It’s clear, however, that they are only interested in political theater. The Trump administration needs to stop playing politics with people’s lives.”

State and local authorities, who didn’t ask for federal help, are awaiting a decision in a state lawsuit that seeks to restrain the federal agents’ actions. State Attorney General Ellen Rosenblum said in court papers that masked federal agents have arrested people on the street, far from the courthouse, with no probable cause and whisked them away in unmarked cars.

The federal government faces also another lawsuit, filed Tuesday in federal court. In it, The Western States Center, two state representatives and others argue federal agents violated protesters’ 10th Amendment rights because they engaged in police activities that are designated to local and state governments. The Western States Center, based in Portland, helps organize and promote the rights of minority and low-income communities.

On Tuesday, federal agencies defended their agents' actions in Portland, detailing the tactics they said had been used against them. According to the Justice Department, some in the crowd outside the courthouse this weekend used radio frequency jammers and shot pellet and Airsoft guns to injure officers. The department is also investigating “suspicious devices outside the courthouse that were configured in a way that could have caused serious harm to those in the building,” spokesperson Kerri Kupec said.

Some of the demonstrators also tried to barricade federal officers inside the courthouse and attempted to set the building on fire, Kupec said.

In a news conference in Washington, acting Department of Homeland Security Secretary Chad Wolf said agents have been assaulted with lasers, bats, fireworks, bottles and other weapons and “yet the city of Portland takes little to no action.”

Wolf said the agency has clear authority to protect government property and detain people suspected of threatening personnel or damaging that property. He disputed that unidentified agents have arrested people, noting they have the word “police” on their uniforms and added that DHS officers wear camouflage, as they do when they work on the border.

“These police officers are not storm troopers, they are not Gestapo. That description is offensive,” Wolf said.

But constitutional law experts said federal officers’ actions are “unprecedented” and a “red flag” in what could become a test case of states’ rights as the Trump administration expands federal policing.

Elsewhere, the Department of Homeland Security said Monday it plans to deploy about 150 of its agents to Chicago to help local law enforcement deal with a spike in crime, according to an official with direct knowledge of the plans who was not authorized to speak publicly and spoke to The Associated Press on condition of anonymity. The Trump administration also sent more than 100 federal law enforcement officers to Kansas City to help quell a rise in violence after the shooting death of a young boy there.

For days after the death of George Floyd — a Black man who died after a white Minneapolis police officer pressed a knee into his neck — protests against police brutality and racial injustice in Portland attracted thousands and were largely peaceful. But smaller groups of up to several hundred people have vandalized federal property and local law enforcement buildings, at times setting fires to police precincts and smashing windows. They have also clashed violently with local police.

Portland police used tear gas on multiple occasions until a federal court order banned its officers from doing so without declaring a riot. Now, anger is building as federal officers deploy tear gas.

As crowds have swelled again in Portland, most prominent among them now are the Wall of Moms and PDX Dad Pod, self-described parents who have shown up each night since the weekend by the hundreds, wearing yellow T-shirts and bicycle helmets and ski goggles for protection and carrying sunflowers.

Some wielded leaf blowers Monday night to help disperse tear gas as they marched down a major downtown street and joined up with several hundred Black Lives Matter protesters in front of the federal courthouse.

“It's appalling to me, and it's a unifying thing. Nobody wants them here,” said Eryn Hoerster, a mother of two children, ages 4 and 8, who was attending her first nighttime protest.

RELATED: Portland protests: A timeline of the demonstrations against racism and police violence