Biden was pressed on the response to the protests in Portland, while Trump refused to condemn white supremacists. 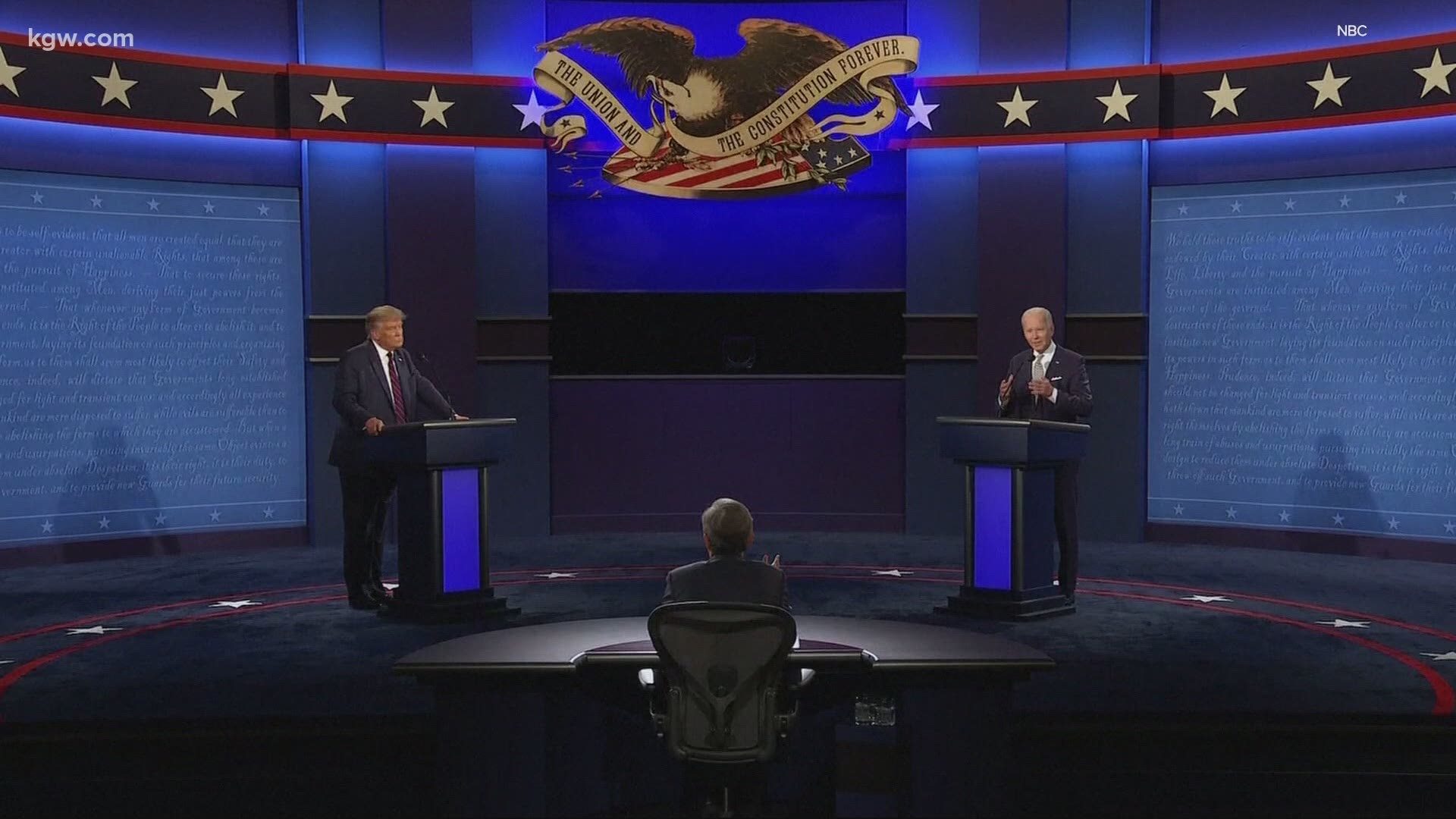 PORTLAND, Ore. — Demonstrations calling for an end to racial injustice and police brutality have taken place across the streets of America this year, so it was no surprise it was a topic of conversation during Tuesday night’s debate between Republican President Donald Trump and Democratic nominee, and former vice president, Joe Biden.

Moderator Chris Wallace, an anchor with Fox News, asked Biden about the protest activity in Portland, which took place for more than 100 consecutive nights, with some ending in riots and many ending with police and demonstrators physically clashing.

Wallace asked Biden if he ever called Oregon Gov. Kate Brown or Portland Mayor Ted Wheeler and told them they need to do whatever it takes to end the violence, even if that means calling the National Guard. Biden responded by saying the violence should be prosecuted, but that he doesn’t currently hold public office and said Brown and Wheeler “can in fact take care of it if [Trump] just stays out of the way.”

Trump then insinuated state and local officials weren’t up to the task and referenced the fatal shooting of Aaron “Jay” Danielson in downtown Portland on Aug. 29, saying he had to send federal marshals after the suspect, Michael Reinoehl. Reinoehl was shot and killed by federal officers as they tried to take him into custody on Sept. 3 in Lacey, Washington.

RELATED: What we know about Michael Reinoehl, the Portland protest murder suspect killed by police

Trump has called out Portland several times in the past for what he considers a lack of law and order. Oregon political strategist Dan Lavey, from Gallatin Public Affairs, has worked with candidates for 30 years. He said he expects more Portland references from the president as the Election Day approaches.

"Portland’s been hurt by this, there is no doubt" Lavey said. "The casual observer across the country, they’ve not seen or heard much positive about Portland. Regardless of where you stand on the political spectrum, unrest, violence, uncertainty, that isn’t a good brand and it doesn’t wear well.”

After the Portland conversation, Tuesday night's debate transitioned to the subject of white supremacy in the United States. Trump danced around a question from Wallace about whether he was willing to condemn white supremacists and military groups.

“I would say almost everything I see is from the left wing, not the right wing,” Trump responded. “I’m willing to do anything. I want to see peace.”

Finally, he said, “Proud Boys — Stand back, stand by, but I’ll tell you what, somebody’s got to do something about antifa and the left because this is not right-wing problem. This is a left wing problem."

Antifa followers have appeared at anti-racism protests, but there’s been little evidence behind Republican claims that antifa members are to blame for the violence at such protests.

Trump infamously said there were good people “on both sides” after a white supremacist rally in Charlottesville, Virginia, that led to the death of a counter-protester.