The riot declaration centered on a separate group of about 75 demonstrators who threw Molotov cocktails at officers, lit fires and broke windows. 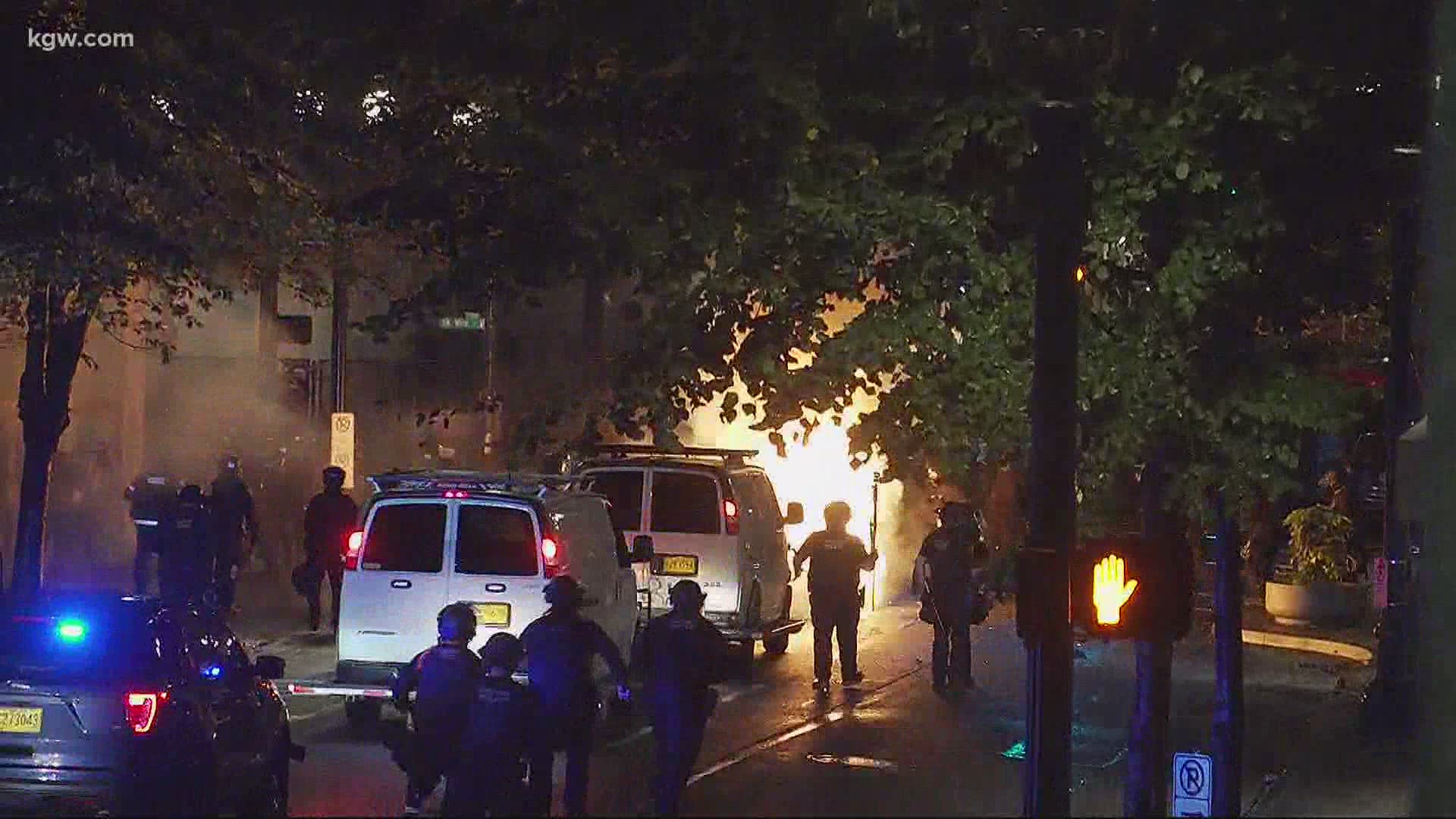 PORTLAND, Ore — Police declared a riot Wednesday night and arrested 13 people after ordering protesters to leave a large area of downtown Portland or face arrest and use of force.

Hundreds of protesters had gathered outside the Multnomah County Justice Center to demand justice for Breonna Taylor, a Black woman who was shot and killed by police inside her Louisville, Kentucky home earlier this year.

A protest by a separate group was declared a riot shortly before 10:30 p.m. and was initially focused on a group of about 75 demonstrators on one side of the Justice Center building, along Southwest 2nd Avenue where the Portland Police Bureau (PPB) Central Precinct is located. A report from the scene indicated rocks were thrown through windows of the Central Precinct. Portland police confirmed the report in a press release. Video shows a small fire along the side of the building.

Not long after declaring a riot, PPB expanded the area in which people were ordered to leave. The expanded area included much of the downtown core.

"Last night we saw level of violence we haven't seen yet," said deputy police chief Chris Davis on Thursday. "We're really kind of at the mercy of the people who show up."

"This type of violence accomplishes nothing," added PPB chief Chuck Lovell. "These attacks on police officers, this destruction of property does nothing to advance the goals of the community."

The group moved from the Central Precinct to the Justice Center and then to Chapman Square Park before leaving at around 1:30 a.m.

Prior to the riot declaration, and separate from the group along Southwest 2nd Avenue outside the Central Precinct, there was a crowd of hundreds on the Southwest 3rd Avenue side of the Justice Center listening to speakers who called for further action to end systemic racism in the United States. One of the speakers was a Black teen who said the crowd was not taking the grand jury decision in the Breonna Taylor case serious enough and that more people should be outraged by it.

Democratic Sen. Ron Wyden tweeted about what many are taking issue with in the case: that no officers were directly charged for killing Taylor

Breonna Taylor deserved justice. We cannot accept a system that enables the extrajudicial killing of Black Americans. There is no better way to honor Breonna’s life than to continue the fight for equity and justice for every single American. https://t.co/Oo67XtWIHh

Earlier on Wednesday, a grand jury in Kentucky recommended three counts of first-degree wanton endangerment for former Louisville police officer Brett Hankison for firing shots into the apartments of Taylor’s neighbors, but not in connection with Taylor’s shooting death.

Taylor, a decorated emergency medical technician, was shot and killed in her home on March 13 when Louisville Metro police officers served a no-knock warrant related to a narcotics investigation.

Mattingly and Cosgrove were not indicted by the grand jury.

Portland protests over racial injustice resumed last week after a brief hiatus due to wildfires across the state blanketing the city in smoky and unhealthy air conditions. Prior to that, there had been more than 100 consecutive nights of demonstrations, many of which ended with clashes between police and protesters, following the police killing of George Floyd, a Black man, in Minneapolis.

RELATED: Grand jury indicts Brett Hankison in Breonna Taylor case, but no charges in her death