As an expert on policing, Professor Blazak says tear gas definitely works to get rid of a crowd, but also works against law enforcement in the long term. 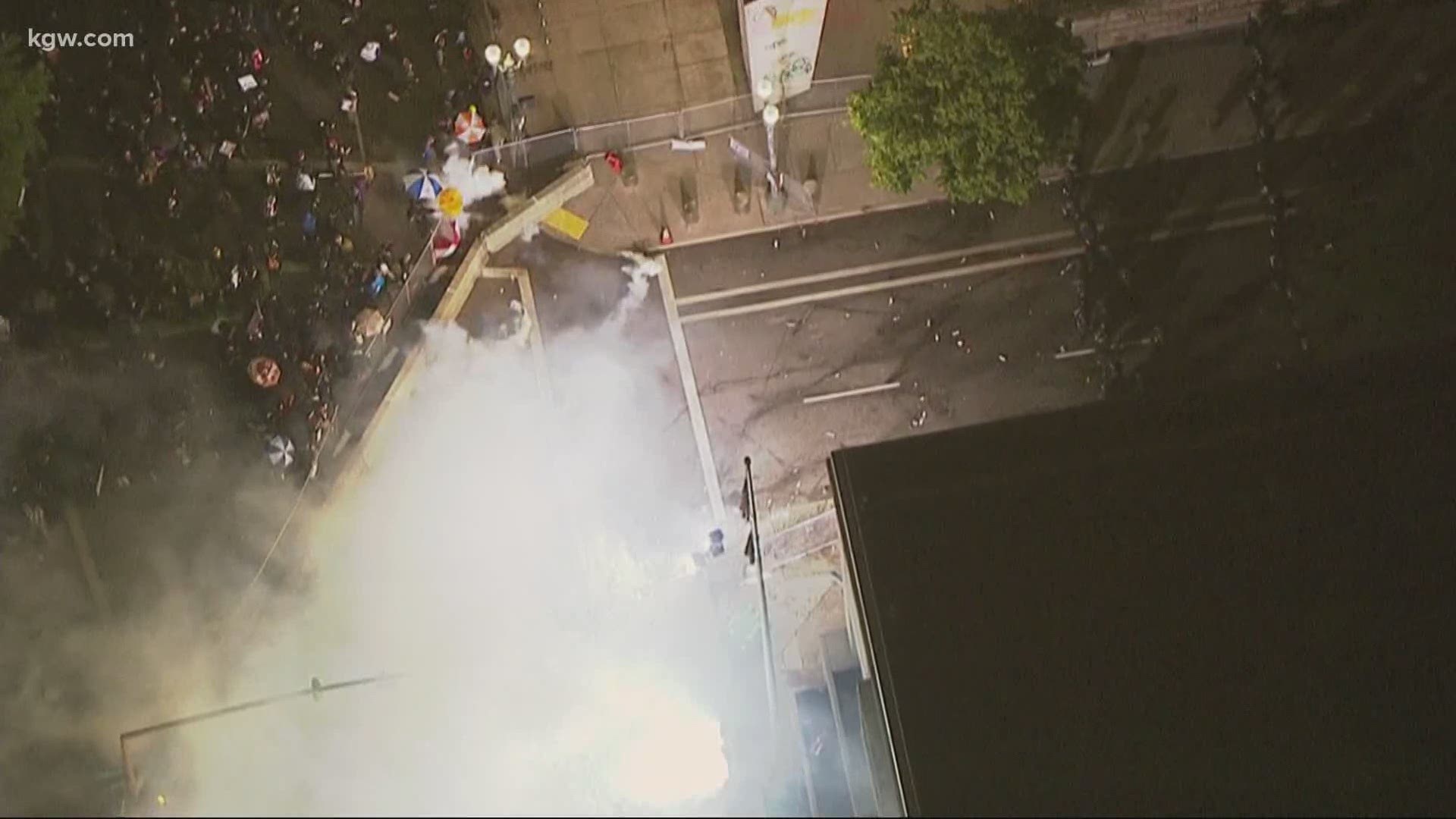 PORTLAND, Oregon — Protests continue in cities across the country for another day.

Millions are calling for changes to policing in America, and justice for George Floyd and the dozens of other African Americans who have died while in police custody.

Storms did not deter people from having their message heard Saturday. As of 10 p.m., the demonstrations had remained peaceful.

After hours of peaceful demonstrations Friday night we saw chaos break out in downtown Portland once again. Law enforcement used tear gas to help break up the crowd.

KGW spoke with someone who was in the middle of that crowd.

Dr. Randy Blazak is a criminology and sociology professor. He studies and teaches about the very things unfolding here in our country right now.

Blazak says he and his wife went downtown late Friday night to see for themselves what was going on and to document history. He recorded the whole thing on his cell phone as he tried to stay back and observe.

Then, he got tear-gassed.

“A little bit after 11 some tension erupted between front line protesters and police and it appeared there were some water bottles being thrown over the fence,” Blazak said.

From behind that fence, Portland police took video that shows several plastic and glass bottles and objects, including bricks and batteries, thrown and sling-shotted at law enforcement.

As Blazak recounts, police announced the protest had turned into an unlawful assembly and ordered people to leave or force may be used to remove them, including crowd control munitions. That's ultimately what happened, as it has every night that police have declared the gatherings unlawful assemblies.

“Then the flash bangs started and people began leaving,” Blazak said. "In the middle of this are these tear gas canisters being shot into the crowd, at least near us. So this was a point where it started getting hard to breathe, you could smell it."

Documenting it all, Blazak says people split off to different areas of town, then many returned to the Multnomah County Justice Center around midnight.

“Then here we are a couple blocks away, no people at all. I'm wanting to record police,” Blazak said as he explained the video he shot. "The police officer aims his weapon there at me. I back away flashing the peace sign to tell him 'I mean no harm'. Then this other person is saying, 'Why are you shooting at us?' Then right over my head a tear gas canister lands behind me. And I start breathing the tear gas."

Blazak says it was crippling and incapacitating.

“It sort of comes on you in a wave all the sudden. I'm on my hands and knees coughing, I couldn't see, I couldn't breathe."

Officers continued to use smoke and flash bangs as well to try to control the rioters.

The sheriff's office, who was working alongside the Portland Police Bureau, says their goal was to protect the Justice Center and the inmates, staff and services inside.

Tear gas is a last resort, but Multnomah County Sheriff's Office says they used it after protesters kept throwing dangerous objects and tried tearing the fence down around the building.

As an expert on policing, Blazak says tear gas definitely works to get rid of a crowd, but also works against law enforcement in the long term.

"When you use a noxious agent like that you anger people, you bring people into the fight. People who see it as an injustice are now going to be showing up at these rallies thinking all cops are the bad guys. And it creates an us versus them dynamic," Blazak added.

Portland Mayor Ted Wheeler released a statement Saturday about the use of tear gas to manage crowds during protests.

He advised the Portland Police Bureau not to use tear gas, or CS gas, unless there is "a serious and immediate threat to life safety."

On Friday, Wheeler had told protesters outside the Multnomah County Justice Center that he supported a tear gas ban for 30 days, which was a measure implemented in Seattle.