'Enough is enough' | Police chief says Portlanders are tired of violence, at protests and elsewhere 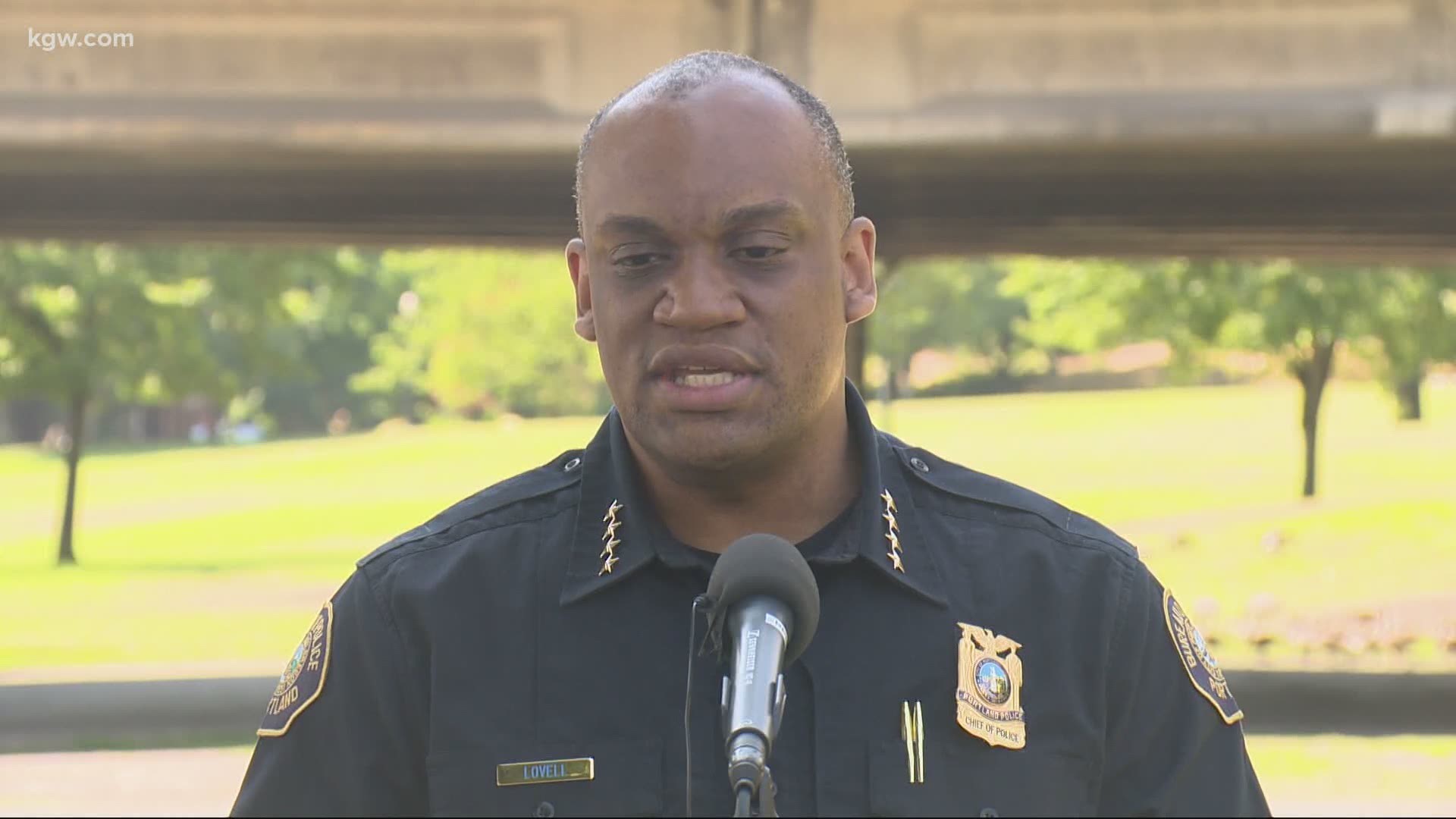 PORTLAND, Ore. — Portland Police Chief Chuck Lovell lamented the destruction and criminal activity happening downtown during a meeting with the media on Wednesday morning, and he said the recently defunded Gun Violence Reduction Team should come back.

Protesters have gathered in downtown Portland each night for nearly 10 weeks since the death of George Floyd, an unarmed Black man who was killed during an arrest in Minneapolis when a white police officer, Derek Chauvin, knelt on Floyd's neck for nearly 8 minutes.

Portland's protests and rallies against systemic racism and police brutality have mostly been peaceful, with thousands of people gathering in downtown Portland to chant, listen to speakers and call for change.

"There have been some really large peaceful protests where people have come out, listened to and given speeches, marched to different parts of the city, and that has required zero police engagement," Lovell said.

Lovell said there's a small group of people at the protests dedicated to destroying property and provoking a response from police. Those crowds have gathered late each night outside the Justice Center, federal courthouse, and Portland police precinct and union buildings. They've smashed windows, lit fires, and thrown objects at officers, including fireworks, rocks and bricks.

Wednesday night on North Lombard Street, a spectacular scene played out around 11:15 p.m. A large pickup drove down the middle of the street while demonstrators were on either side, and the truck was pushing an empty motorcycle under its front end.

Sparks sprayed out from under the truck and lit up the area. The driver was later stopped, cooperated with police and was not arrested. It came during another night of protests focused on the police union offices in North Portland.

Police arrested three people and said the night included people breaking into the union offices and setting fires along with rocks and bricks thrown at officers trying to break up the crowd.

“I’ve never seen a summer like this,” said Chief Lovell.

He said the actions of those people are taking away from the larger Black Lives Matter movement, which he said is powerful and important.

"Portlanders need to send a strong message that enough is enough," Lovell said. "This is not forwarding the goals that are going to lead to better outcomes for people of color. This movement is really powerful, but the violence has taken away from it. ... This is not what Portland is about. This is not what we need in our city."

The chief also said that directing so many officers to the downtown protests takes away from the work police need to be doing, especially as the city has seen a large increase in homicides and shootings in the past month. Police said Wednesday that there were 99 shootings in Portland last month, up from 35 in July last year.

Lovell recently wrote an op-ed that was published in the New York Times. In the editorial, the chief touched on his concerns that weeks of unrest have drowned out voices that must be heard to make positive change.

In the op-ed, Lovell wrote that the Portland Police Bureau is a progressive agency that's made significant changes to policies and training, and he called for an end to violence and pledged to be a leader in police reform.

"There was a need to talk about the nightly violence, but also the peaceful protests," Lovell said when asked why he penned the op-ed. "I wanted to represent our city in a fair manner from a police chief's point of view. I wanted to be helpful. The reputation we were starting to get nationally was kind of troubling."

Peaceful protests and community pressure led to city council defunding Portland police by $15 million in June. Funding was cut for the GVRT, which many believed was racist because it stopped more Black people than anyone else.

Chief Lovell said the narrative is wrong and that the unit was not racist.

The bureau released numbers Wednesday showing July had 99 shooting incidents this year, compared to 35 for July of 2019.

Lovell said that a majority of the shooting victims in Portland are Black. In the shootings last month, Black people made up 66% of the victims.

The chief said he hopes the specialized GVRT returns,  because it worked and the community wanted it.

“The stops have gotten a lot of attention,” Chief Lovell said. "But a lot of those stops end with handshakes and conversation. And there's a real familiarity and people miss it. We hear from a lot of people in the community saying hey we need the Gun Violence Reduction Team back. We need these officers that know our community, that know this issue of gun violence, that we really relied on to help stay safe."