KGW's Pat Dooris spoke with Oregon's governor on Monday to get her take on what is happening in Portland and what she hopes will happen moving forward. 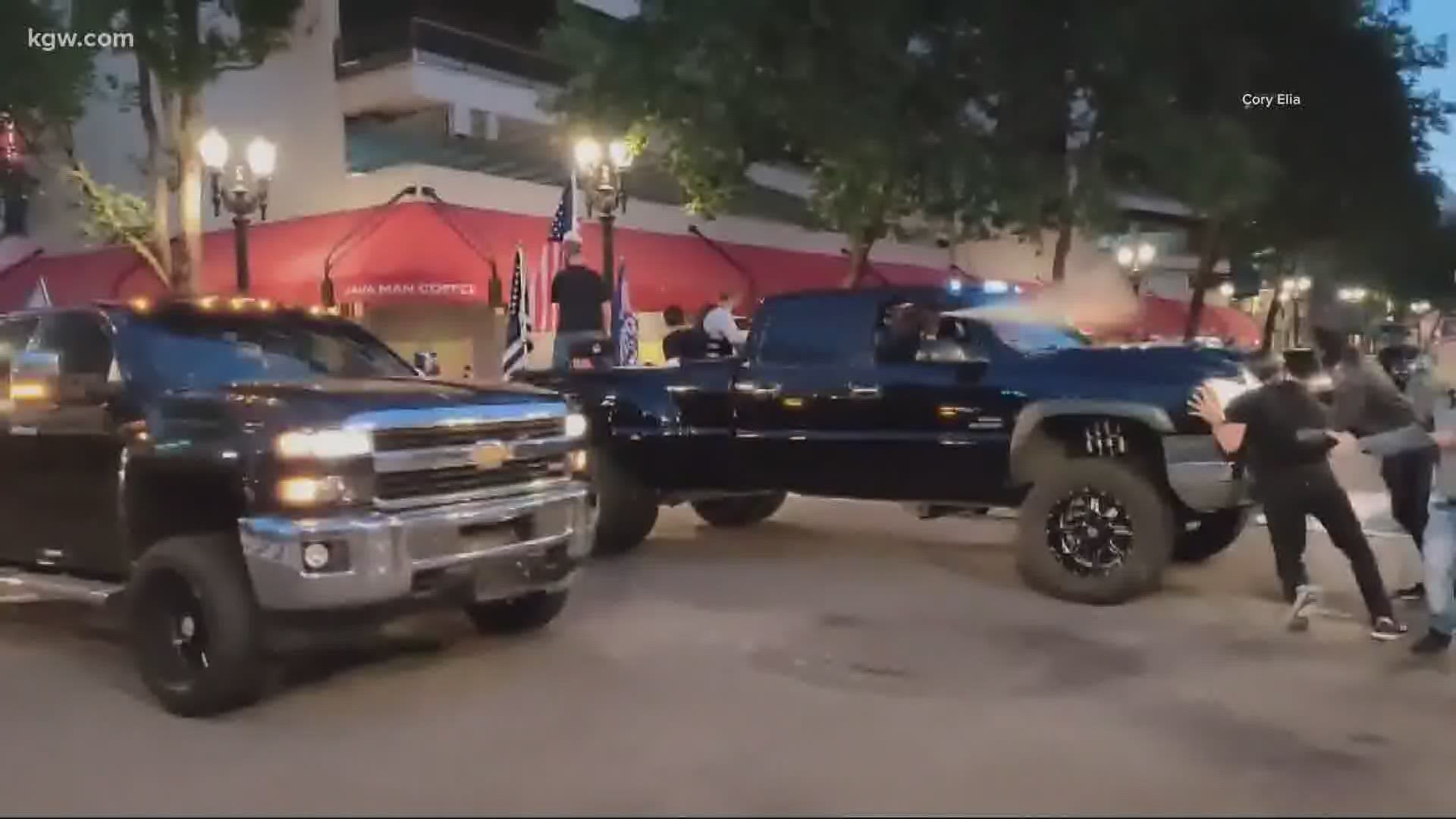 PORTLAND, Ore. — The killing of a 39-year-old man in downtown Portland on Saturday night increased the pressure on city and state leaders to get involved and find a way to put an end to the violence in Portland.

The shooting is still under investigation and police said it's unknown if the incident was politically motivated. No arrests have been made. The shooting followed a car rally in support of President Donald Trump.

Last week, Gov. Brown tweeted it was time for the violence and vandalism in Portland to end. Nightly protests, sparked by the police killing of George Floyd in Minneapolis and racial injustice, have been ongoing in Portland for more than three months. Some demonstrations have been non-violent but others have been declared riots and resulted in clashes between police and protests.

KGW's Pat Dooris spoke with Gov. Brown on Monday. The interview was done before the sheriffs in Clackamas and Washington counties said they would not send deputies to Portland to help with the protest response like the governor requested.

Here is the full interview:

Pat Dooris, KGW reporter: First thing we wanted to talk about are the ongoing protests and specifically Mayor Wheeler getting a lot of criticism from both sides. What do you think? Is he doing OK? Should he resign?

Gov. Brown: Pat, I have to say this. These are extremely challenging times. This is a 100-year global pandemic. We are also faced with an economic recession and on top of that, a clarion call for racial justice and local elected officials are making the best decisions that they can with the information that they have at the time. Obviously, I would put Mayor Wheeler in that category as well.

Dooris: Do you think it's unhelpful then? Would you urge people to stop calling for his resignation?

Brown: Look, I think what we need to focus on right now is tackling racial justice. It permeates our systems, our institutions and our cultures. And I think each one of us can be working to make a difference as we work to eradicate racism. I think that's where we should be focusing our time and energy right now.

Dooris: We saw your plan for helping to stop the violence in Portland. Could just talk about that a little bit? I imagine you're hoping that state police will have sort of the same impact they did when they came in to protect the federal courthouse.

Brown: I have full faith and confidence in our Oregon State Police. But I think what's most important about this plan is that it's a unified effort. It's a collective effort. Not only do we have the Oregon State Police, we have the Portland Police Bureau and hopefully our local partners to assist in this effort. My number one goal is to ensure that people can be safe. But the second thing is I want to make sure that we can allow a peaceful protest around the city and frankly, around the state. I am hopeful this plan will work. If it doesn't work, we will try something else.

RELATED: Deputies from Clackamas, Washington counties won’t be sent to Portland to help with protest response

Dooris: There have just been so many people gathered on both sides and the police are obviously outnumbered. And I know the mayor has asked several times why not send in the National Guard, if not just for the weekends when the huge rallies were happening?

Brown: That's a really good question. First of all, our National Guard are volunteers, right? And what we need in these situations are trained law enforcement and that's why this collective effort is critically important. Our national guard, I am so incredibly grateful for all of them and their employers that allow them to do this work, are assisting us in a number of efforts from responding to calls at the employment department, they have helped deliver personal protective equipment throughout the entire state. And as you know, it's wildfire season and they also assist with that effort as well. I think it is so important that we put them in roles that are suited to their strength, their training, their ability.

Dooris: But it does seem that if you could bring 2,000 men and women into Portland to protect the public buildings, that that would tip the scales, wouldn't it?

Dooris: What about this killing over the weekend? I've heard a lot of criticism of President Trump. It seems like, frankly, maybe there's a lot of blame on both sides to go around.

Brown: Here's what I would say about President Trump. I think there's absolutely no question that his words are sewing hate and division across the entire United States. And we're seeing these weird words, bear fruit in communities like Kenosha and communities like Charlottesville. And unfortunately now in Portland. But what I have to say is this is not about Donald Trump's America. This is about our Oregon and what we want for our communities within this incredibly great state. And I think it's so important that we come together, that we end the violence, the arson and the property destruction on the streets of Portland, and that we focus our time and our energy on eliminating racism in our police system, in our criminal justice system, in our education system, in our health care system. That's where we need to be focused as a community and as a state.

Dooris: I've talked with some of the people who took part in the Trump rally. And part of what they're saying is, for crying out loud, we have a right to be able to drive through any public street we want with a flag in our car. We shouldn't have to be attacked. Do you have any response to them?

Brown: Absolutely. And I have worked incredibly hard during my tenure as governor to make sure that the rights of folks who oppose my executive orders, that their free speech rights are protected, as well as those issuing a clarion call to end racism in this country. All sides have an opportunity. They must have the ability to exercise their right to free speech, but there's absolutely no question that the president's political rhetoric is certainly a call to violent action in this country. And it's absolutely unacceptable.

Dooris: As far as detailing on the state police, do you know how many and when they'll come to town and that sort of thing?

Brown: I am confident in superintendent Travis Hampton. He has been an exemplary superintendent. I am confident that he's working closely with the Portland police chief and our community partners to make sure that they have both adequate numbers of police in the area as well as the right type of equipment and the right techniques to handle this situation.

Dooris: Since I think we have just a moment or two left, can I circle back one more time on Ted Wheeler? Are you confident in his leadership and direction?

Brown: These are really tough times. Elected officials at all levels, including at the state and local level, are having to make really tough decisions. I know they're doing the best job they can given the challenging times and given the difficult situation.

Dooris: If you don't mind me pushing just a little bit more, that is a great statement, but I'm not quite sure how it relates to Ted Wheeler.

Brown: I am not going to Monday morning quarterback other elected officials right now. As I said, you know, these are really challenging times. I will tell you that I am one of those folks that likes to make decisions that will keep people happy and right now it is really challenging to make decisions. We do the best we can, all of us, Republican, Democrat, urban and rural, to keep our community safe and to make sure that our communities are able to move forward.