Wheeler said he hasn’t focused enough on what he called the two most important issues facing Portland: ending the nightly violence and the city's economic recovery. 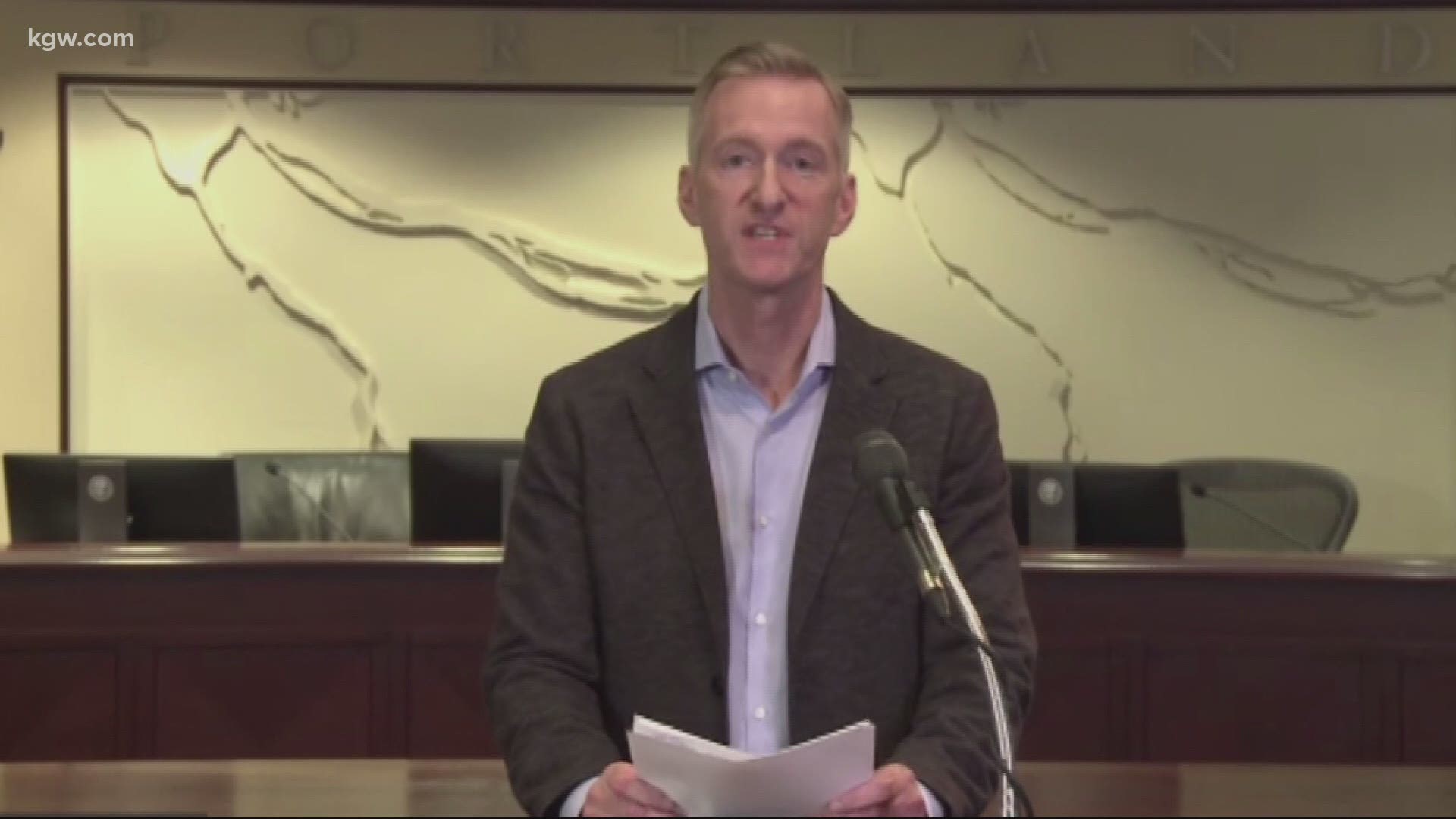 PORTLAND, Ore. — Mayor Ted Wheeler on Wednesday called for Portlanders to come together to denounce the violence taking place during nightly protests, while also saying he’s wrongly tried to solve several city crises, from demands for racial justice to the COVID-19 pandemic to the city's budget, on his own.

Wheeler was mostly silent over the last week as protests, riots and violence continued on a nightly basis. In Wednesday's news conference, he asked for the city’s help to "rise up" with a collective voice.

“We have allowed our proud tradition of progressive protests to be stolen by a few dozen individuals engaged in violence and criminal destruction,” Wheeler said. “That’s a line we can’t allow our community to cross. Not anymore. Enough is enough. It’s time to rise up and take immediate steps to repair and beautify our city. But I need the help of the entire community.”

Portland is in its 13th week of nightly protests since the killing of George Floyd in Minneapolis on Memorial Day. But demonstrations have turned violent on a nightly basis, particularly over the past week with Portland police declaring riots each of the last five nights and making 94 arrests.

Wheeler said he hasn’t focused enough on what he called the two most important issues facing Portland: ending the nightly violence and the economic recovery of the city.

He said the first thing that needs to happen is for the violence to end. From there, he said the focus needs to be on addressing immediate police reforms that demonstrators have been asking for and cleaning up downtown to give people confidence it’s a safe place to do business.

The mayor didn’t have specifics Wednesday, saying details about his plan would be released in the coming days.

Wheeler, who is also the police commissioner, plans to meet with the Portland Police Bureau (PPB) Wednesday night. He said two goals are to determine if PPB needs more resources to help bring an end to the violence, as well as discuss what can be done to address community concerns about police accountability. Wheeler said the current process to investigate police misconduct, which is done through the city auditor’s Independent Police Review, takes too long and there needs to be a method to hold officers accountable in real time.

When asked about some demonstrators’ demands to abolish the police, Wheeler again stated he doesn’t support that. He said he’s continued to have conversations with demonstrators, some of which he admitted were not successful, about their mistrust of police.

Wheeler also said he talked with Police Chief Chuck Lovell about the bureau’s limited response to dueling protests last Saturday that turned into violent brawls between alt-right and Proud Boy factions and left-wing protesters in downtown Portland. Many members of the right-wing group were armed with handguns and rifles. One alt-right member was caught on video pointing a handgun at the opposing crowd, with his finger on the trigger. Wheeler said there is “no circumstance in which that is acceptable.”

Lovell told Wheeler police didn’t have enough personnel on hand to make targeted arrests, and therefore didn’t intervene. Wheeler said the chief’s answer raises questions on if police have the resources needed to make arrests in a timely manner.

Wheeler plans to meet with business leaders on Thursday to discuss what can be done to assure them the downtown area is safe and welcoming to customers. While again limited on specifics, Wheeler said his broad focus is identifying what resources the city has that could help businesses, from cleaning up graffiti to marketing opportunities aimed at supporting downtown businesses.

“I need everybody in this community work with me,” he said. “This is a moment where we all have to be accountable.”