‘Sometimes I screw up’: Hardesty again apologizes for inflammatory statement on police, vows to fight for continued reform

Hardesty clarified she doesn’t believe police have intentionally set fires but believes the bureau and federal officers are exacerbating tensions with protesters. 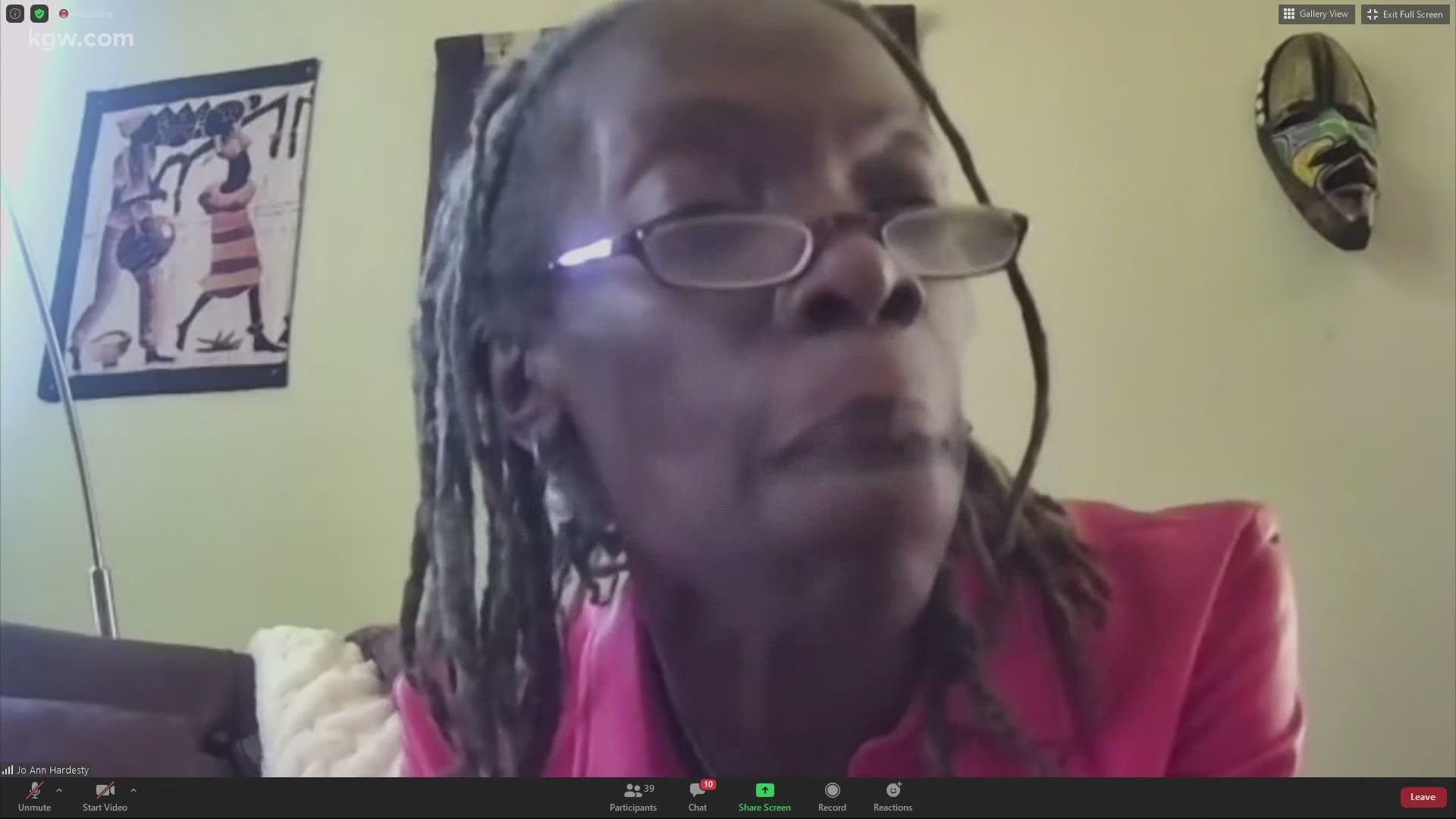 PORTLAND, Ore. — Portland Commissioner Jo Ann Hardesty held a press conference Thursday to address the ongoing protests in Portland and several recent statements she had made.

The news conference had been planned since Monday, two days before the commissioner accused the Portland Police Bureau of lying about damage in the city to justify attacking protesters in an interview published in Marie Claire.

“I believe Portland Police [Bureau] is lying about the damage—or starting the fires themselves—so that they have justification for attacking community members,” Hardesty said.

Her comment was met with strong opposition from Portland police union president Daryl Turner and Portland Police Chief Chuck Lovell. Turner said Hardesty is “part of the problem in Portland" and Lovell said he was disappointed an elected official would make such a statement without any evidence.

I'm disappointed that an elected official would make a statement like this without providing specific facts to support it. This allegation is completely false.

Hardesty Wednesday night released a public apology that concluded, “We all have bad days but most of them don’t happen publicly. I have always said we can disagree without being disagreeable, but today I did not meet that standard, and I’m sorry."

During Thursday’s news conference, Hardesty again admitted she made a mistake.

“Sometimes I screw up, and yesterday was one of those days. I made some remarks that were out of the context that I would have liked to put it in,” she said.

She said she left a message with Lovell and plans to reach out to Turner next week to apologize.

Hardesty said her frustration had been bubbling since Friday night when federal officers and Portland police used force to disperse protesters after she hosted a peaceful vigil outside the Multnomah County Justice Center earlier that evening.

She clarified she doesn’t believe police have intentionally set fires but believes the bureau and federal officers are exacerbating tensions with protesters.

"As the first African American woman on the city council, as someone who has had to just kind of put my own personal feeling aside because I have a job to do, there's been a lot coming at me nonstop, and I can say when I'm wrong,” Hardesty said.

Last week, Hardesty took to Twitter demanding action regarding the police bureau and included a message for Mayor Ted Wheeler, who also serves as police commissioner.

“Mayor Wheeler, if you can't control the police, give me the Portland Police Bureau," she said.

Wheeler responded with a statement saying he will continue to be police commissioner.

RELATED: Mayor Wheeler says he will continue to be Portland police commissioner

When asked what she would do differently if she oversaw the city’s police, Hardesty said she would give an immediate order that officers no longer show up at protests with riot gear.

“I don’t want to see them coming out initially ready for a fight. And that’s exactly what it looks like when they show up in riot gear,” she said.

“We have to get the federal goon squad out of here,” Hardesty said in reference to federal officers.

When asked whether she thinks Mayor Ted Wheeler is qualified to lead Portland through this historic moment, the commissioner said, "You know, he is who he is. He is a privileged white man who grew up among wealth and privilege, and so I don't know if he has what we need at this time. I can tell you I have what we need to fundamentally change how policing happens in Portland and would be fearless about changing it."

Hardesty said she wants to engage with police and the community to re-envision what public safety looks like in Portland.