Following a nonviolent protest and march downtown, hundreds clashed with federal officers near the federal courthouse. 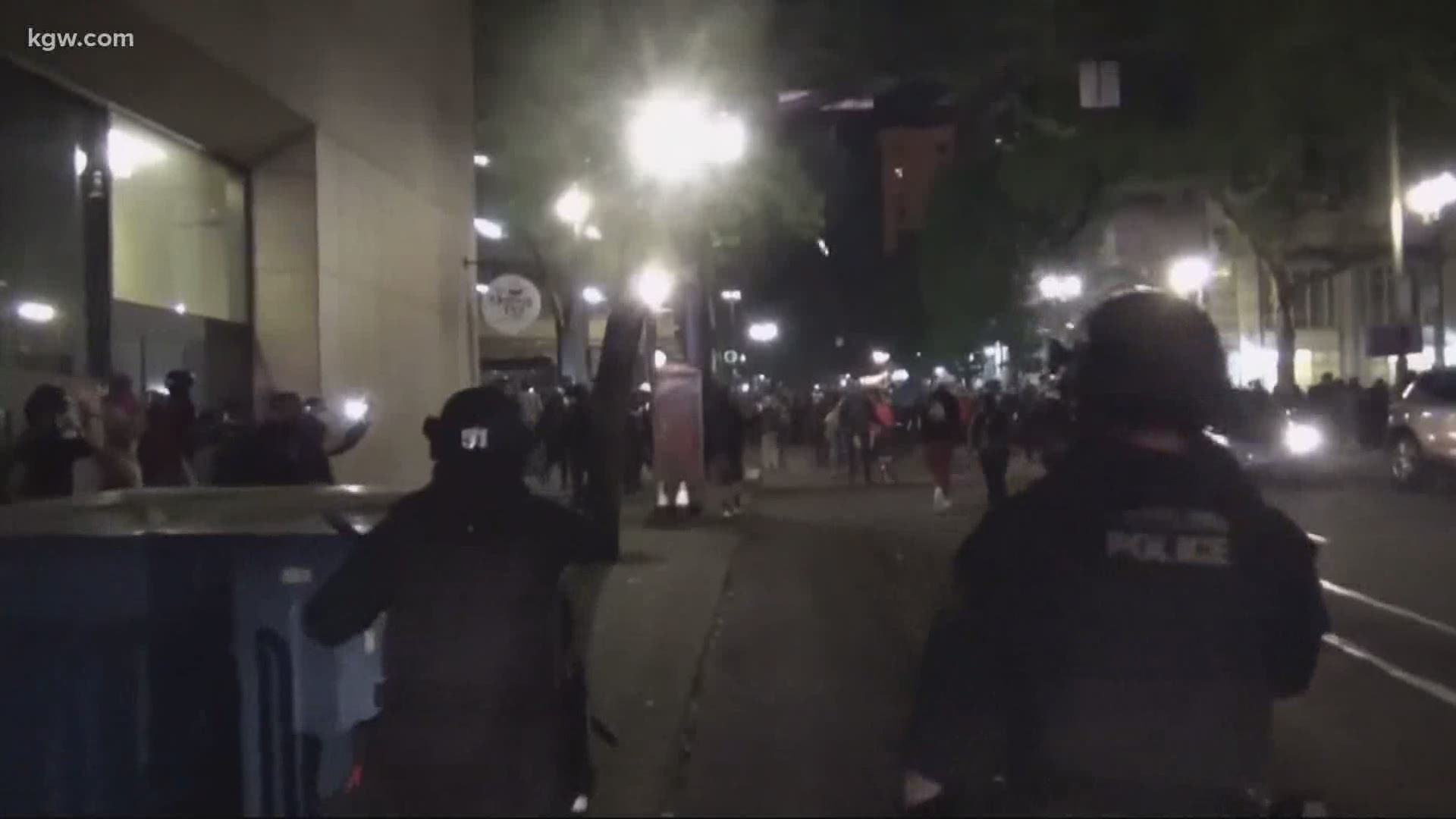 PORTLAND, Ore — Federal officers used tear gas on crowds of people after some of them attempted to break into the federal courthouse and set it on fire late Monday night.

The night began with a large, nonviolent demonstration and march through downtown Portland.

Hundreds of Portland moms and dads gathered at the Salmon Street Springs along Portland's Waterfront Park. At around 9 p.m. the group marched to the Multnomah County Justice Center downtown to join other demonstrators.

It was the third night a group called “Wall of Moms” came to protest downtown. On Saturday and Sunday, they created a human barrier between Portland police and protesters.

Erick Welsh was at the demonstration Monday night. This was the first time he's come into Portland to protest but has attended some gatherings in the suburbs.

"I love our country and will fight to protect it and if that means showing up and being a part of this peaceful movement, it's the least I can do," said Welsh.

Another protester, Kent Grenther, said he's not a fan of when demonstrations are crushed by police whether they are local and federal.

The protesters marched through the streets downtown until around 11:30 p.m., when they gathered outside the federal courthouse.

A bunch of dads @pdxdadpod are joining @WallOfMoms for a march to the federal courthouse pic.twitter.com/xCtymhmudq

As the crowd grew late Monday night, people began spray painting the federal courthouse and pounding on plywood that covered the building, according to the Portland Police Bureau. By 12:45 a.m., several people broke through the plywood and began pounding the windows with metal objects. They broke at least one window.

The feds came rushing out aggressively. Throwing people to the ground, tear gas, firing less-lethals. One ran at me and punched me in the head, knocked me to the ground. I'm ok. pic.twitter.com/3fZ8VzzPwh

Some people in the crowd lit a fire near a door to the federal courthouse around 2:25 a.m., police said. Federal officers put the fire out. Later, others poured an accelerant over the door at the front of the courthouse and lit it on fire. Federal officers again used tear gas and other munitions to disperse the group.

Around 2:45 a.m., dozens of people blocked Southwest Salmon Street at 5th Avenue with fencing and other items. Meanwhile, others continued to light fires downtown, including one on the awning and side of a building at Southwest Yamhill Street and 4th Avenue. Portland firefighters arrived to put out some of the fires while Portland police provided security.

Windows at Portland City Hall were smashed during the night.

A Portland police spokesperson said police officers made no arrests and did not use CS gas during the night.

This is the eighth straight week protesting has occurred in Portland in the wake of George Floyd’s death. Some of the largest protest crowds in recent weeks have turned out. Hundreds of demonstrators seem galvanized by the presence of federal officers, who were called in to help protect federal buildings.

On Saturday, a  brief video clip viewed millions of times shows a federal officer hitting a Navy veteran with a baton during a protest.

That same night, a Multnomah County commissioner said she could barely breathe after inhaling tear gas deployed by federal law enforcement. Demonstrators and local leaders say these are examples of how federal officers in Portland are using overly aggressive tactics.

RELATED: Portland protests: A timeline of the demonstrations against racism and police violence