The declaration was made after protesters smashed windows in downtown Portland. 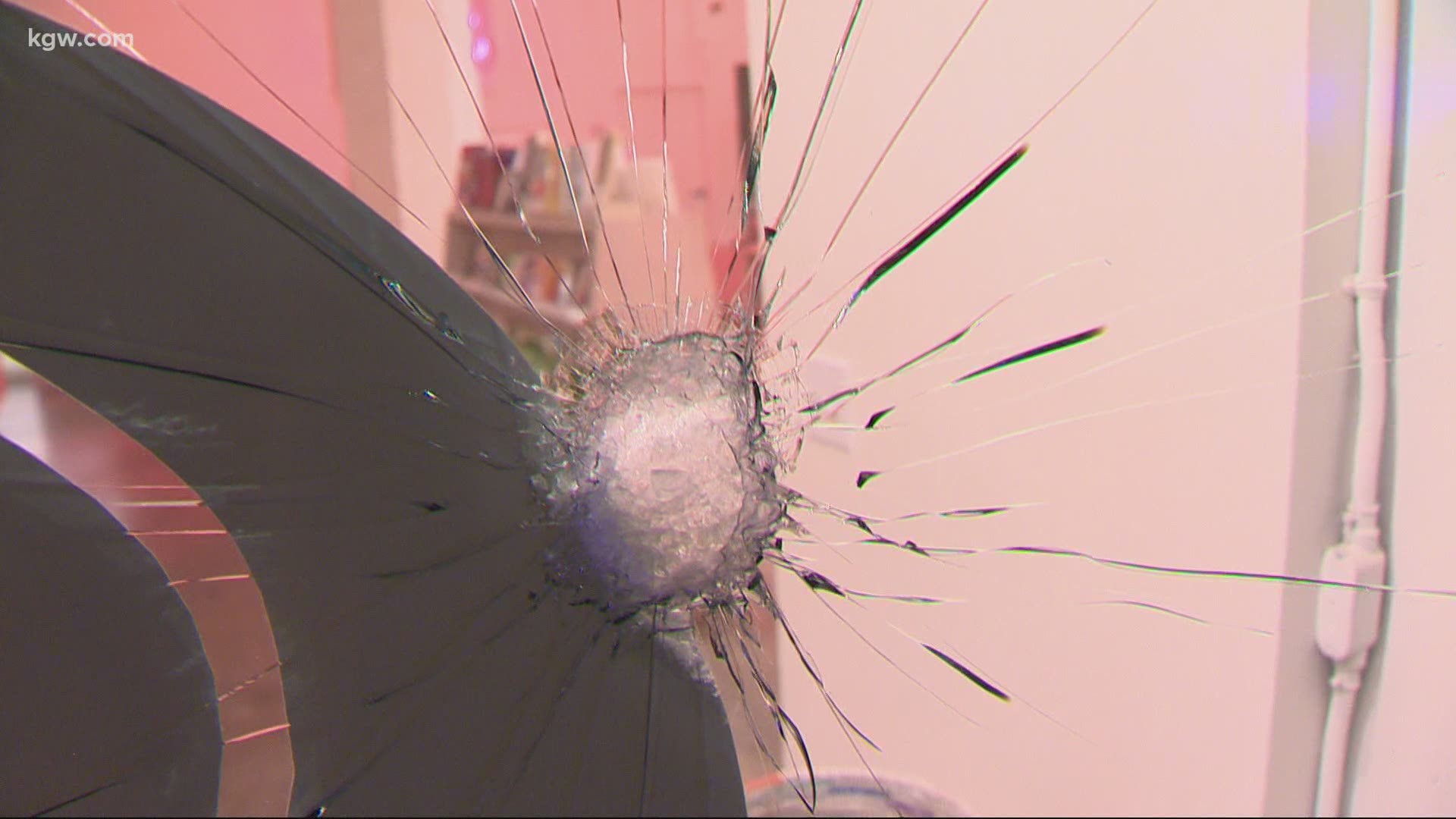 PORTLAND, Ore — A riot was declared and the Oregon National Guard was activated in response to demonstrators smashing windows in downtown Portland.

The declaration was made around 6:45 p.m. by "unified command," a law enforcement partnership made up of Oregon State Police (OSP), the Multnomah County Sheriff's Office (MCSO) and the Portland Police Bureau (PPB). Oregon Gov. Kate Brown organized the command group to address potential violence in Portland this week, with tensions heightened from the election.

In a statement released Thursday, Gov. Brown said she would do everything in her power to keep the peace in Portland.

"Two groups gathered in downtown Portland last night," Gov. Brown said in a statement Thursday. "One group demonstrated peacefully for hours by the waterfront. Their clarion call advocating for racial justice and Black lives has resonated with Oregonians and driven real reform over the past several months.

"Unfortunately, a second group of self-styled anarchist protesters, some armed, also marched downtown last night, with no discernible goal other than to cause violence and vandalism."

Twelve people were arrested throughout the night as officers warned demonstrators to leave the area. MCSO posted updates on the status of the riot on behalf of the unified command.

Unified command said a man accused of throwing a firework at officers was arrested. MCSO initially reported that a molotov cocktail had been thrown but said after inspection, it was a firework.

The suspect, 23-year-old William K. Beecher, was armed with a loaded rifle and several magazines, a knife and other fireworks, according to unified command.

By 9:15 p.m., a number of small businesses, retailers, restaurants and places of worship had been damaged, according to the Portland Business Alliance (PBA).

The business alliance noted that there were also "heartwarming accounts of people helping each other" by boarding up broken windows and keeping establishments safe from further harm.

"It's important to note that many of the businesses that are still open in downtown Portland are just trying to survive amidst a multitude of challenges our city has faced over the past several months due to COVID-19 closures and extended political violence," a statement from the PBA said.

In their 10 p.m. update, the unified command announced that the riot declaration in downtown Portland had been rescinded shortly after 9 p.m. The declaration lasted for roughly two hours, officials said, and officers had “disengaged in an effort to deescalate the situation.”

People continued to march downtown and around 10:30 p.m., unified command declared an unlawful assembly at Southwest Broadway and Southwest Washington Street. They ordered the crowd to move or be subject to arrest or citation.

As expected, more squads of Police have arrived, and they have declared this an Unlawful Assembly. #Portland #PortlandProtests pic.twitter.com/Rnw2M9JdDl

By midnight, federal agents had come out of Pioneer Courthouse at Southwest 6th and Southwest Morrison Street, independent journalist Justin Yau reported from the scene.

Shortly after 1 a.m., Yau said two people had been taken into custody by the agents. Witnesses told Yau they were counter-protesters, and that at least one of them was armed.

Two people were just arrested by federal agents. Witnesses on scene said they were right-wing counter-protesters, & at least one of them was armed. #PortlandProtests #PDXprotests #BlackLivesMatter pic.twitter.com/779VE2W8wT

The following 12 people were arrested, according to the Multnomah County Sheriff's Office:

The riot declaration and decision to bring in the National Guard were made in response to one group of protesters, who began the night at North Park Blocks before marching through downtown.

Another group of demonstrators, estimated at a couple hundred people, was gathered along the waterfront. They first gathered at Revolution Hall in Southeast Portland before marching to the waterfront, at one point disrupting traffic on the Morrison Bridge. The Defend Democracy Coalition, a coalition of more than 50 different community groups, organized the demonstration, calling on protesters to “stand up for Black lives, demand that every vote be counted and defend our democracy.”

Wednesday’s events follow a largely peaceful gathering and march through Southeast Portland on election night. Estimates from journalists in the crowds at Tuesday night’s “unity march” said hundreds of people marched from Revolution Hall through the streets of Southeast Portland chanting the names of Black people killed by law enforcement.

Authorities said they did not observe any violence; some in the crowd were openly carrying firearms. Vandalism, largely graffiti, was seen at several locations, including Central Catholic High School and Revolution Hall.