"It's been difficult to look at," Commissioner Dan Ryan said about returning home to the damage. "The sad thing is, I was expecting it and was prepared." 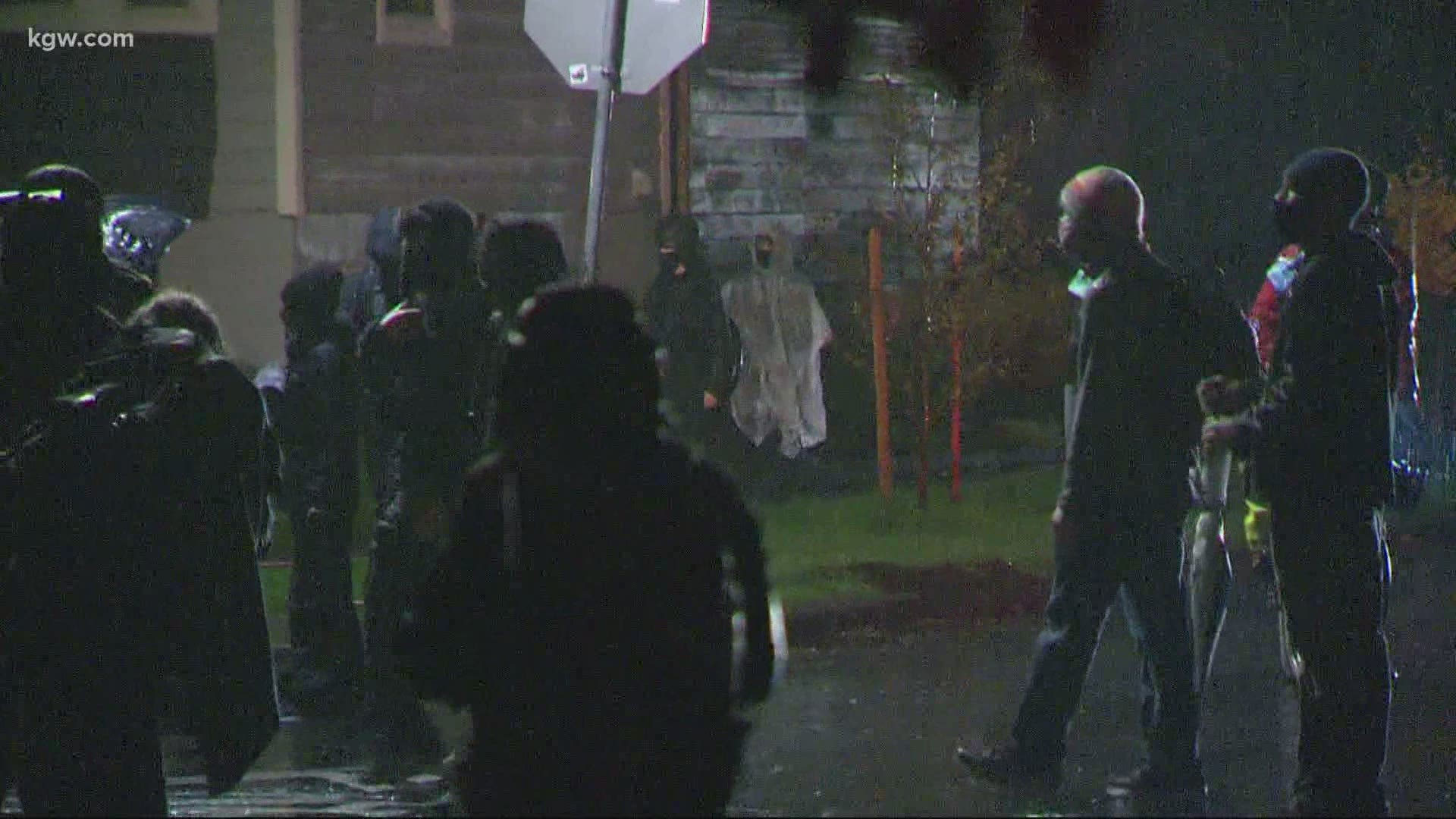 PORTLAND, Ore — An unlawful assembly was declared Thursday night in North Portland after demonstrators broke a window and threw burning flares and paint-filled balloons at the home of Portland City Commissioner Dan Ryan.

Ryan was one of three members of the Portland City Council who voted against a proposed $18 million cut to the Portland Police Bureau's (PPB) budget on Thursday. This was the fourth night in the past week that demonstrators have shown up at Ryan's home, officials said.

The unified command, a law enforcement partnership made up of the Multnomah County Sheriff's Office (MCSO), Oregon State Police (OSP) and PPB, declared an unlawful assembly following this incident.

Ryan appeared on KGW's "Straight Talk" shortly after he returned home to see the mess.

"It's been difficult to look at," he said. "The sad thing is, I was expecting it and was prepared. My fiancé and I were safe. And we're in communication with our amazing neighbors on the block."

On Friday morning, Portland Mayor Ted Wheeler condemned the actions of the demonstrators in a statement.

"Last night’s criminal destruction and attack on Commissioner Ryan’s home are reprehensible," Wheeler said. "Violence, criminal destruction and intimidation are unacceptable and will not be tolerated. Those responsible must be found, investigated and prosecuted to the fullest extent of the law. I condemn anyone who uses violence to attempt to silence the voices of others."

Portland City Commissioner Jo Ann Hardesty, who drew up the proposal to cut the PPB budget by $18 million and voted for it, said in a statement Friday morning that the actions of the demonstrators went too far.

"Last night a group of people vandalized Commissioner Ryan’s home following a tense city council hearing on the city's budget," Hardest said. "I want to be clear: we can disagree and be upset over these issues, but I do not condone what took place at the Commissioner's home last night and those who engaged in the acts need to be held responsible. Fighting for systemic change is messy and complicated, but what shouldn't be complicated is recognizing when lines have been crossed, and that's what happened last night."

PPB said the incident is under investigation.

"The Portland Police Bureau and Portland Fire & Rescue are actively investigating this alarming criminal activity that put an entire neighborhood at risk," PPB said in a press release.

A paint balloon has been thrown and there are road flares on the ground. A potted plant just got broke, and a side window has been cracked open. #PortlandProtests #Portland pic.twitter.com/SL397Feleu

1 / 3
Dan Ryan
A broken window at the home of Portland City Commissioner Dan Ryan on Thursday, Nov. 5, 2020 in Portland, Ore.

Thursday's rally and march, which called for defunding of the PPB, started at Arbor Lodge Park at around 8 p.m. The event was organized anonymously and was to be carried out in solidarity with the Black Lives Matter movement, according to a social media post.

Law enforcement officers started patrolling the area around the park before the march began. KGW's Mike Benner tweeted that authorities made announcements urging the crowd to stay out of the street.

Thursday night.. demonstrators on the move in North Portland after meeting at Arbor Lodge Park. Unified command making announcements urging crowd to stay out of the street pic.twitter.com/8VcGigQ1VN

After the group stopped at Ryan's home, about 40 demonstrators gathered around 9:30 p.m. outside the Portland Police Association building near North Denver Avenue and North Lombard Street, about a half mile from the park where they started. The unified command warned the group if they did not stay out of the street, they could be subject to arrest, tear gas and crowd control munitions.

Within 30 minutes of the unified command's warning, the crowd left the area.

Meanwhile, just before 10 p.m., police received a call that an entry door at Portland City Hall downtown was on fire. The unified command said a security guard quickly put out the flames, which likely prevented further damage.

It's believed someone threw or placed a burning object near the door. An arson investigation is underway and no one arrests have been made at this time.

Authorities said they conducted "high visibility patrols" during the march in North Portland to deter criminal activity. They made more than a dozen traffic stops and arrested two people.

The following information was released about Thursday night's arrests:

Officers are performing high visibility patrols in the North Portland neighborhood of Arbor Lodge to deter criminal activity. So far more than a dozen traffic stops have been made. One driver was arrested for eluding @ORStatePolice troopers and MCSO deputies. pic.twitter.com/fALLwcGOUh

Thursday night's demonstration comes one day after a destructive riot in downtown Portland that prompted Gov. Kate Brown to call in the Oregon National Guard per the request of local law enforcement. Windows of several buildings, including small businesses and a church, were vandalized and 12 people were arrested.

Gov. Brown on Friday extended her executive order to create a law enforcement unified command to keep the peace in Portland. The order was set to expire Friday evening but Gov. Brown extended it through Sunday evening.

“As we enter the weekend, I am calling on Oregonians to express themselves peacefully,” said Brown. “We have a long history of exercising our First Amendment rights in Oregon, but political violence, intimidation, and property destruction solve nothing."