'We will not tolerate any kind of violence': OSP, MCSO put in charge of crowd response for Proud Boys' Portland rally

Law enforcement will also be allowed to use tear gas if necessary during Saturday's rally, Brown said. 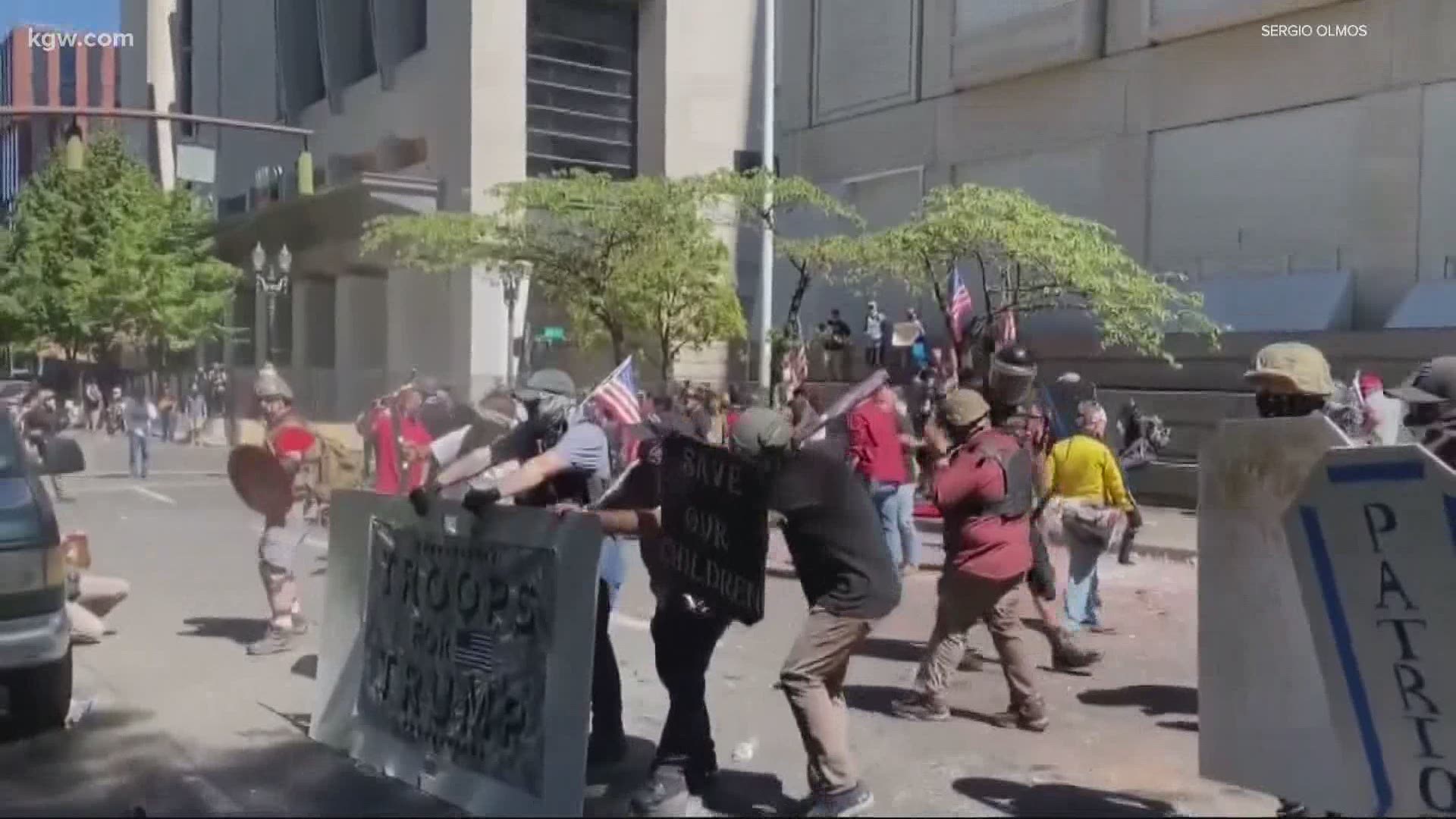 Oregon Gov. Kate Brown announced the move during a press conference Friday morning. She said she used her executive authority as governor to put in place the unified command structure for this weekend's event. Portland Mayor Ted Wheeler and other local and state officials approved of the move, Brown said, which includes allowing law enforcement to use tear gas if necessary during the rallies.

"We must have a coordinated effort across state and local law enforcement officials to keep everyone safe," Brown said.

OSP Superintendent Travis Hampton said the move is not an indictment of the Portland Police Bureau or its officers.

"[The Portland Police Bureau and their officers] have endured some incredibly mentally and physically taxing situations for over 100 days while they have done the best they can to keep the streets safe," Hampton said.

Brown said that law enforcement will not tolerate any kind of violence during this weekend's events and that anyone who engages in criminal activity will be charged, prosecuted and held accountable.

"They will be saturating North Portland, Interstate 5, between the venues of Delta Park and Peninsula Park," Hampton said.

The goal of law enforcement this weekend will be to protect the rights of people coming to Portland to peacefully assemble and express themselves peacefully. Law enforcement will focus their efforts on keeping the groups separate to avoid confrontation between opposing groups.

"Our law enforcement is absolutely committed to protecting free speech," Brown said, "and will work very hard to de-escalate the situation by keeping the groups apart."

Wheeler banned the Portland Police Bureau from the use of tear gas as a crowd control device earlier this month, but as part of the agreement for this weekend's event, that ban will be lifted for law enforcement managing crowd response.

"Operating under the governor's emergency act, we will not remove CS gas as a possibility from these events," Hampton said. "We will use it judiciously. We hope we will not use it at all, but we will make this available not only to Oregon State Police troopers and Multnomah County Sheriff's deputies, but also to Portland police officers."

Multnomah County Sheriff Mike Reese said tear gas will only be used if other options have been exhausted.

"It will be a last resort," Reese said. "If there is a need for CS [gas], it will be in a life-saving event where people's lives are at risk."

"If the situation allows, we do like to question the individuals whether they are carrying their firearm lawfully or not," Hampton said. "If they are not, we educate them or take appropriate, proportional enforcement action.

"Obviously if you see conduct like pointing a firearm at another, that's an overt criminal act and we expect to take action immediately for that, whether that's hands-on by a police officer or through chemical munition if the crowd is too large of a size for us to handle," Hampton said.

Earlier this week, Oregon State Police (OSP) and the Multnomah County Sheriff's Office (MCSO) denied a request from the Portland Police Bureau (PPB) for help with crowd control during Saturday's rallies because of the city's ban on the use of tear gas.

The far-right group Proud Boys plan to hold a rally in North Portland's Delta Park on Saturday at noon, though Portland Parks Commissioner Amanda Fritz denied their permit on Wednesday due to COVID-19 social distancing requirements.

In response to the planned protest at Delta Park, multiple anti-fascist groups have planned to gather at the same time at North Portland's Peninsula Park, about 3 miles away. Another group, Safe PDX Protest, said they plan to meet at Delta Park before the Proud Boys rally begins.

Reese said police are anticipating a crowd of 1,000 to 3,000 people. Organizers for the Proud Boys rally said they expect 20,000 people.

City, county and state leaders have urged anyone coming to Portland intent on picking a fight to stay away, and the legislature's Black, Indigenous and People of Color (BIPOC) caucus asked counter-protesters to avoid the far-right rally.

"As the united leadership of the city of Portland and state of Oregon, we publicly oppose the far-right gathering scheduled to take place in North Portland this Saturday," the letter said. "The event poses a physical danger to Portland residents, as clearly shown by the organizers’ long track record of assaults, confrontations, and threats against elected officials and the citizenry of Portland."