A gathering was declared an unlawful assembly shortly before midnight. 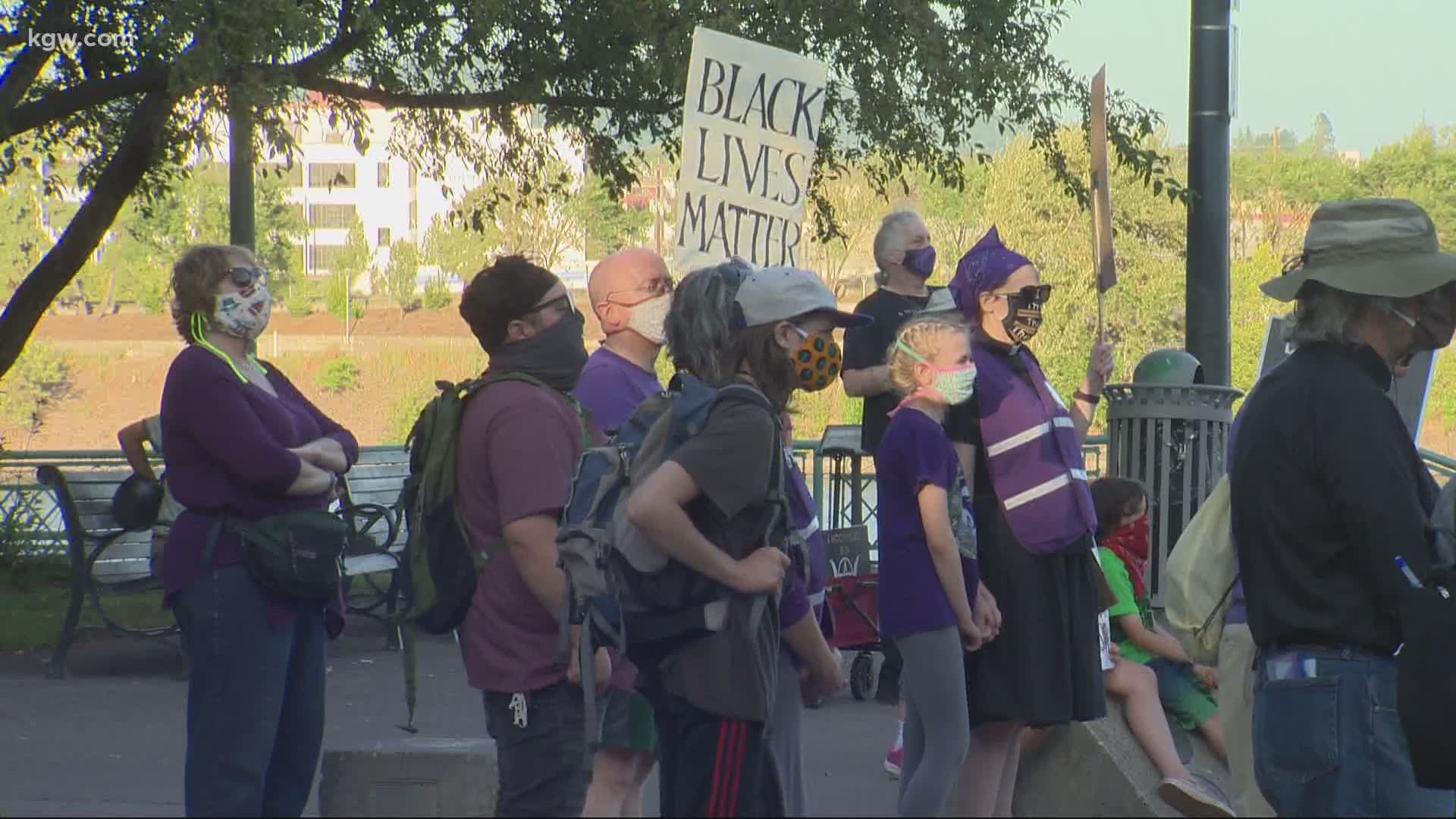 PORTLAND, Ore — Protests continued in Portland on Monday as multiple events took place throughout the evening to rally against police brutality and systemic racism.

At about 9 p.m. protesters used vehicles to block traffic near Lownsdale Square park and the Portland Police Department (PPB) described the event as "mostly peaceful".

A march began on East Burnside Street from Laurelhurst Park at about 9:15 p.m. and ended at the Penumbra Kelly Building where the group of approximately 200 blocked the road in both directions.

The PPB reported that later in the evening, members of the group threw objects at officers and flashed laser pointers, bright flashlights, and strobe lights in the officers' eyes. Officers instructed people to stay off the property before declaring an unlawful assembly due to criminal activity.

The gathering at the Penumbra Kelly Building has been declared by PPB an unlawful assembly due to criminal activity. Move to the east. Leave the area.

Two arrests were made during the evening.

Zachary Perry, 23, was arrested for second-degree trespassing after police said he entered the Kelly Building.

Travis Hessel, 27, was arrested for assaulting a public safety officer.

Protesters and Portland Police officers are assembled on both entrances of the building. Portland Police have just warned against object being thrown at officers. #PortlandProtests #PDXprotests #BLACKLIVESMATTER pic.twitter.com/5dGy2bFkcx

Across the river, clergy and religious leaders gathered at the Salmon Street Fountain on Monday night to support Black lives matter protesters.

The group, which was made up of Jewish and Christian clergy members, have been in purple vests and showing up at Portland protests as “Clergy Witnesses.” Rev. Tara Wilkins said in an email that they have been out for 60-plus nights protesting and observing law enforcement’s response to the community.

Portland Interfaith Clergy Resistance said they are demanding police accountability, denouncing the use of weapons on protesters and insisting on serious policy change.

“Our systems are broken, culture and policy must change. And like the widow at the judge’s door, we knock on,” Wilkins said.

Those who gathered at the waterfront planned to march a few blocks over to the federal courthouse.

About two dozen faith leaders rallying on the waterfront pic.twitter.com/uMj5KNRM1V

Meanwhile downtown, a crowd formed outside the Justice Center and the federal courthouse building, where protests have occurred nightly for the last two months.

Around 10:45 p.m. at the intersection of Southwest Fourth and Salmon, there was a stand-off between police, state troopers and protesters. It was not clear what led up to the tense interaction.

At least one person was taken away in handcuffs. As troopers left the area, protesters threw things at them and police responded by using pepper-balls on the crowd.

Some of the state police troopers are taking off, others still here with batons and guns that shoot pepper balls .. not sure what led up to this pic.twitter.com/IydR100YG7

The chief touched on his concerns that weeks of unrest have drowned out voices that must be heard to make positive change. He called the bureau a progressive agency that's made significant changes to policies and training. He called for an end to violence and pledged to be a leader in police reform.

This is the start of ten straight weeks where nightly protests have gone on in Portland. On Sunday, families took to the streets of downtown Portland to rally against police brutality and systemic racism. Crowds stayed out until about midnight downtown and Portland police said they didn’t engage with any of the protesters Sunday night.