This is the 12th straight week protesters have taken to the streets following the killing of George Floyd. 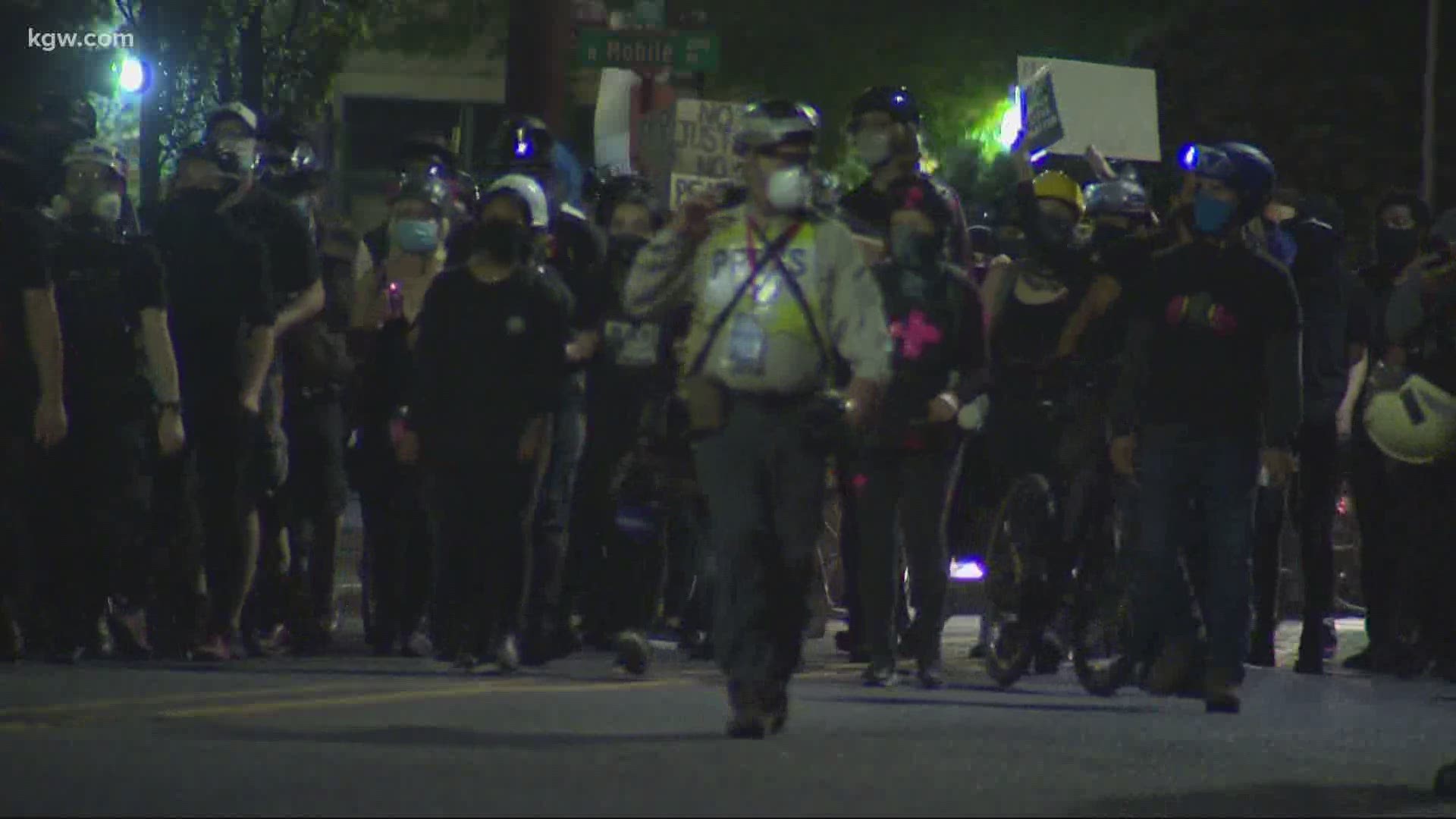 PORTLAND, Ore — Protesters gathered Monday night at Kenton City Park in North Portland. In a social media post, the group said they were calling for the abolition of prisons and the police force.

This is the 12th straight week protesters have taken to the streets following the killing of George Floyd.

The group marched to the Portland Police Association building on North Lombard. Portland police tweeted that there were about 200 protesters outside the police union and traffic in the area was blocked.

Around 11 p.m., Portland police tweeted that they had "learned people near the PPA building on N Lombard St may be attempting to force entry into the building." They said anyone participating in criminal behavior would be subject to arrest or citation.

Police arrived on the scene to check the building out and had a brief staredown with protesters. Police say officers found a plywood covering and window had been broken and that someone had tried to flood the building with a hose. The hose was removed.

Police say a smoke canister was then deployed so officers could leave. The crowd, which dwindled to less than 100, remained for several more hours and protested peacefully, police said.

Portland Police riot officers arrived on scene to inspect the PPA building to see if there were signs of forced entry. There is a brief stand off between officers and protesters. Officers have since departed. #PortlandProtests #PDXProtests #BlackLivesMatter pic.twitter.com/Y2JQ9M4P3g

Over the weekend, a protest in Southeast Portland remained mostly peaceful until midnight when a riot was declared and tension escalated between police and protesters.

On Sunday night, a video circulated on social media showing a man being assaulted in downtown.

The video, which contains graphic violence and language, shows a group of people kicking, punching and pushing to the ground a man in the street near where a truck crashed into a light pole. The video shows a person kicking the man in the face while he's sitting on the ground, apparently knocking him unconscious.

In a statement Monday, Multnomah County District Attorney Mike Schmidt said what he saw in the video is wrong and illegal.

“I condemn this violence,” he said. “Assaults on community members and police officers undermine everything our community is doing to bring meaningful and lasting change to the criminal justice system and beyond.”

RELATED: ‘Assaults will not be tolerated’: Multnomah County DA responds to video of man beaten in downtown Portland

Schmidt said his office is working with police to investigate. Anyone with information about the case is asked to call Portland Police Bureau Detective Brent Christensen at 503-823-2087.