'It's hurting our entire city': Clean up underway in Portland following riot at Penumbra Kelly building

People lit a dumpster on fire outside the building, broke windows and threw rocks, bottles and other objects at officers throughout the night. 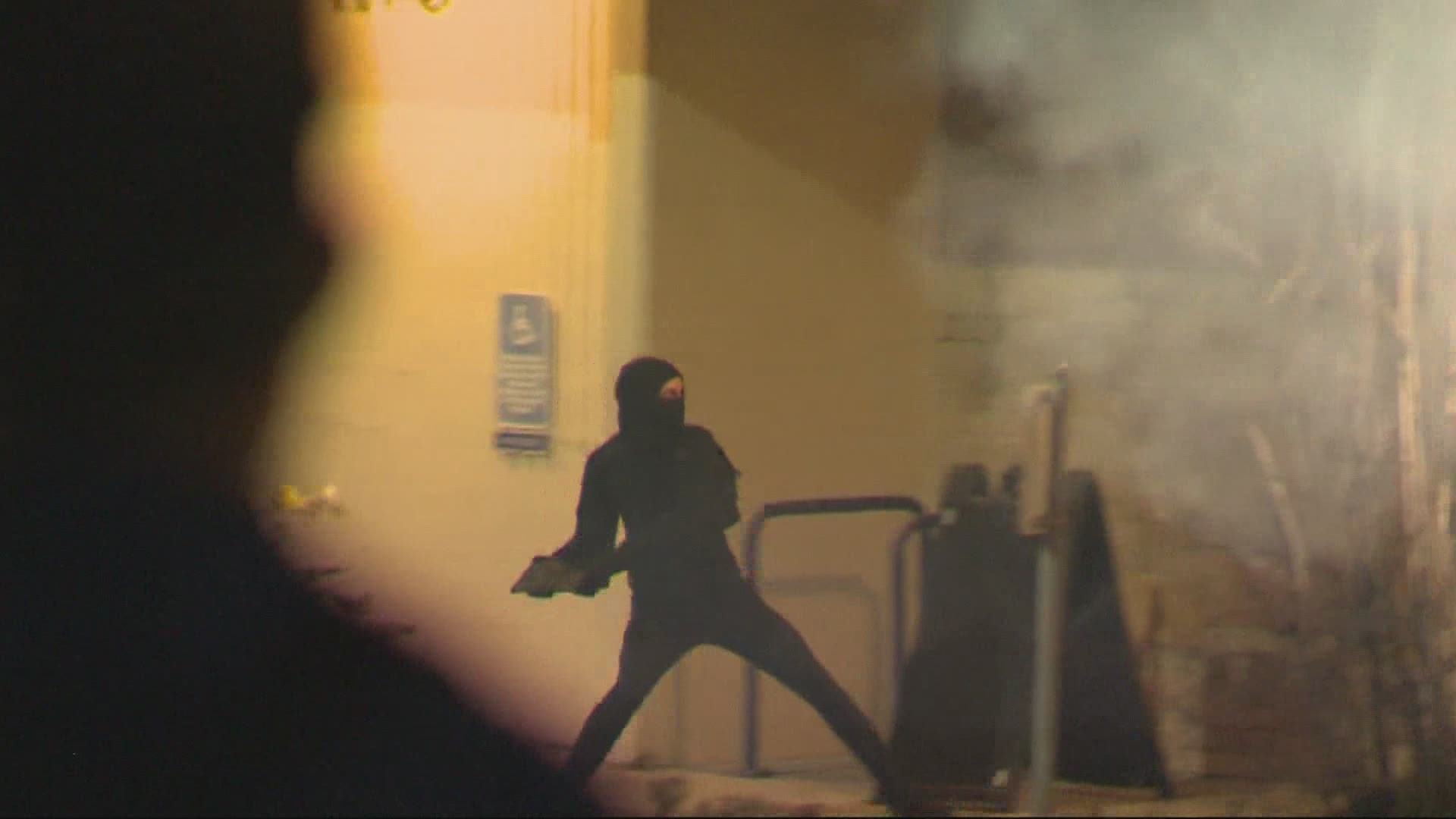 PORTLAND, Ore. — The police killing of a young Black man in Minnesota has sparked protests in Portland.

After a vigil for Daunte Wright at Laurelhurst Park Monday night, a couple hundred people marched to the Penumbra Kelly Building on E. Burnside Street.

It's a familiar scene for neighbors in the area.

The fight against police brutality and racial inequity played out at the Kelly Building last year - and once again Monday night. Those set on causing chaos do and police respond with force.

Remnants of the destruction can be seen at First Covenant Church down the street from the building.

"The front doors of our church were smashed as part of that escalation with police and protesters," the church's lead pastor Rev. Chad Glazener said.

Church leaders feel for some of their members living nearby who are scared and fed up, but they also stand in solidarity with those who are hurting.

"At the end of the day, right, it's a couple of windows. And the thing we need to keep laser-focused on as a community is the lives of people of color that instigate these protests," Glazener said.

"We want to be known as loving, caring compassionate people who are also concerned about matters and issues of justice," First Covenant Church congregation president John Wenrich told KGW. "It means we have a lot of work to continue to do. We feel that pain, we know that pain, we acknowledge that pain. We understand where this comes from. We can’t keep going on this way."

Disappointed in protesters' attack on the church, neighbor Emily Olsen says she supports the core of what demonstrators are fighting but she does not support violence.

Olsen and her nine-year-old son watched protests right outside their house last year. Olsen says they often started peacefully and escalated into some demonstrators fighting with law enforcement late at night.

"It's just unfortunate that the people there, for what I believe are all the right reasons, aren't always the ones that end up getting talked about later because then there's always a few bad apples," Olsen told KGW.

But Portland police say this group immediately acted aggressive when they got to the Kelly building.

"As police tried to engage them and provide direction again, they were met with hostility and verbal directions were not heeded," Capt. Tina Jones said, "It was a planned, coordinated attack on the police."

Reporters on the ground say officers came out as people showed up and some demonstrators threw fireworks toward them.

People lit a dumpster on fire outside the building, broke windows and threw rocks, bottles and other dangerous objects at officers throughout the night. They also lit neighbors' trash cans on fire.

"The flashbangs and all those things, they’re scary because he’ll hear them, my son, and he doesn’t know if it’s a gun shot," Olsen said.

Police warned the crowd multiple times to leave and ultimately declared a riot around 10:30 p.m. Most demonstrators moved down the street and police disengaged.

Portland police haven't arrested anyone but say as they investigate the event, they could still make arrests.

"Some people in this group were advocating for the abolition of police. They were advocating and encouraging people to burn down police facilities. We know these are not the sentiments of our public at large," Capt. Jones said.

"It's just the people breaking things - I really frown on that. It’s hurting our entire city," Olsen added.

The police bureau is already stretched thin and says it had to pull staff to handle this, which impacted calls for service around the city.