Participants in a pro-Trump rally clashed with counter-demonstrators downtown before the fatal shooting. 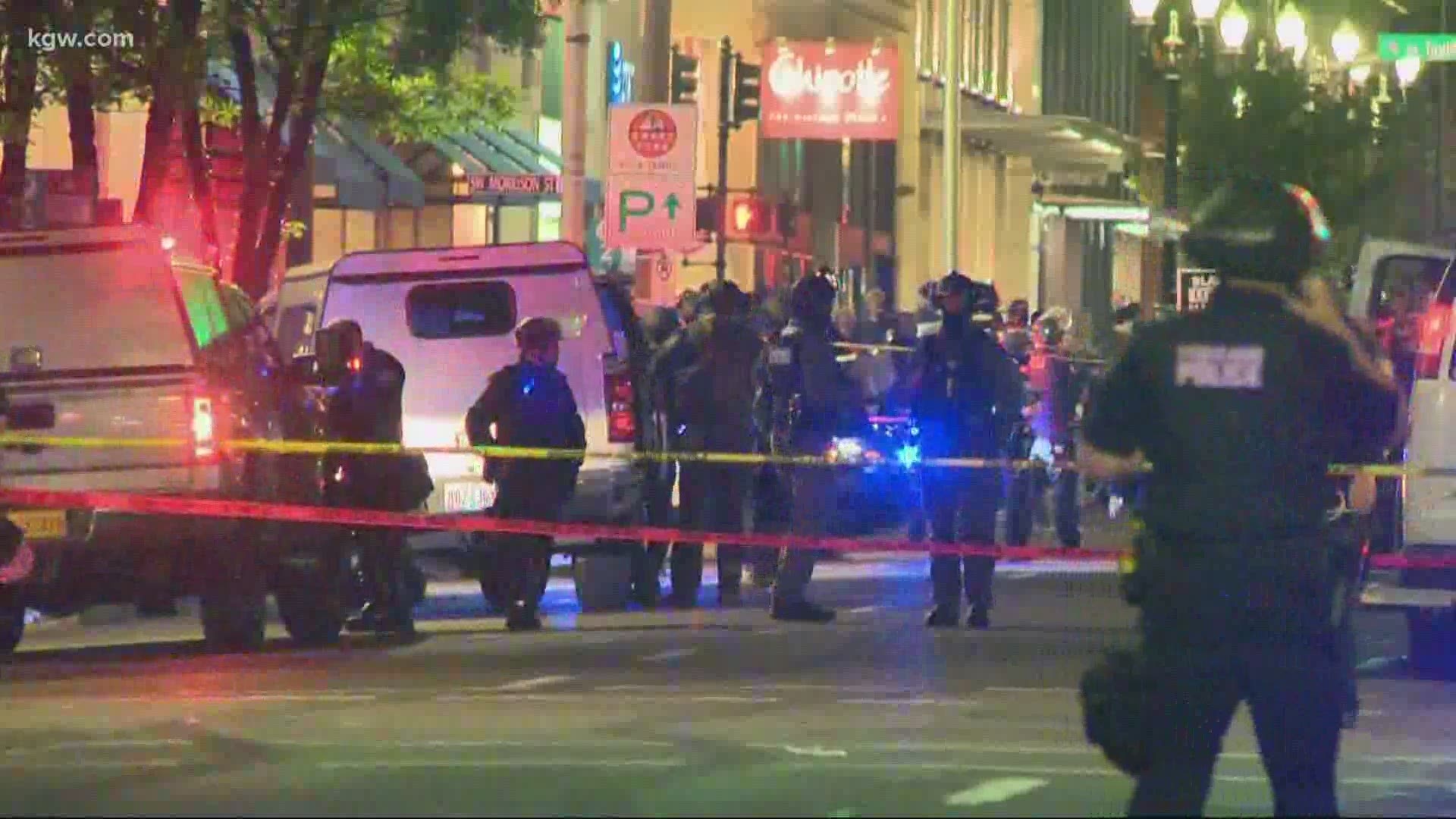 The pro-Trump rally had made its way to downtown Portland from Clackamas Town Center. It got the attention of protesters who planned to gather in front of the Multnomah County Justice Center.

Portland police confirmed the fatal shooting at around 9:20 p.m. They were looking for witnesses, they said. They have not said whether the shooting is connected to the clashes between the Trump rally and counter-protesters.

Portland Police have shut down SW 3rd to the south of Alder. Officers say they’re investating a shooting. Looking for eye witnesses.

Portland police said in a press release that officers heard gunshots coming from the area of SW 3rd Avenue and Alder Street. When officers arrived on scene, there was a victim with a gunshot wound to the chest. The victim died on scene.

A correspondent for The New York Times, Mike Baker, and the Willamette Week are both reporting that the victim of the shooting was wearing a hat with the insignia of the far-right group Patriot Prayer on it.

NEW: 1 man has been shot and killed in Portland.

The man was wearing a hat with insignia for Patriot Prayer, a far-right group.https://t.co/vxK3J0NH2t

Protesters gathered in front of the Federal Courthouse in downtown following the violence between the pro-Trump rally and counter-protesters.

BLM protestors are outside the federal courthouse pic.twitter.com/JADhHNnes9

Reporters, who have been following the caravan since it left the Clackamas Town Center, reported increased clashing and violence with counter-protesters as the pro-Trump rally came into downtown Portland.

Protests have taken place almost daily for over 90 nights in Portland following the death of George Floyd, who died after a former Minneapolis police officer knelt on his neck for nearly eight minutes.

They are shooting protestor with paint balls and mace. https://t.co/UvaNmlgEr2

Driving through crowds and macing out of vehicles at SW 4th and Washington. pic.twitter.com/dCNJxYlkYn

Some arrests were made, according to Portland police.

A political rally is caravanning throughout downtown Portland. There have been some instances of violence between demonstrators and counterdemonstrators. Officers have intervened and in some cases made arrests.

On Friday night, a group sat in the lobby of Mayor Ted Wheeler's apartment complex demanding to speak with him.

They eventually left after a few hours. The mayor never met with them. KGW reached out to Wheeler's office and has not heard back.

A larger group, estimated of about 150 by The Oregonian/OregonLive, were outside and listened to speakers and music.

Had to take a moment for Jaelin 🏀

I am in front of Mayor Ted Wheeler’s home, where there’s something of block party happening. A handful of protesters are occupying the lobby. Metal(ish) music is playing#PortlandProtests pic.twitter.com/F7lRPQePaq