Christina Hoff Sommers says about a dozen students refused to let her get through a speech on closing the feminist mind. 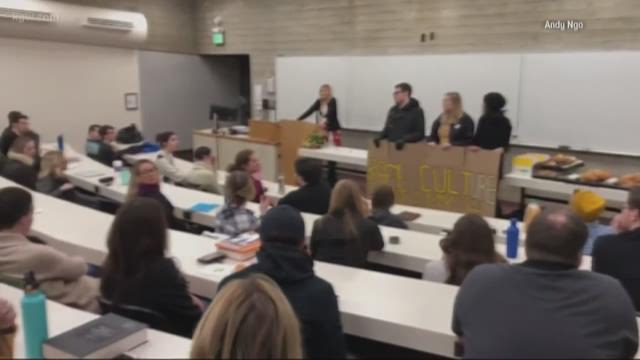 “I’ll say the majority of students, liberal and conservative, were shocked and disapproving of these antics but they were helpless,” said Sommers.

Sommers says about a dozen students refused to let her get through a speech on closing the feminist mind.

“I criticize feminism as a feminist,” said Sommers.

The invitation to speak came from students in the Federalist Society chapter at Lewis & Clark.

“We thought that her point of view would give an interesting perspective that isn’t heard a lot on campus,” said the Vice President of the Federalist Society David Sorensen.

Protesters were outraged Sommers was allowed to speak at all.

For that reason, among others, demonstrators made it difficult for Sommers to make a point.

“I would say to our credit we tried to do the best we could in terms of not cancelling the speech,” said Professor of Law Tung Yin.

A school official did stop the event sooner than expected. Sommers was frustrated, but said it would not keep her from returning to the campus in the future.

“I think they may want to have some workshops on free expression and study the constitution of the U.S. more carefully,” Sommers said. “These are future lawyers.”

The school declined to give an official statement for this story.