The school board voted 4-3 to ban Black Lives Matter and Pride flags in schools, but neighbors argue those marginalized groups are not political. 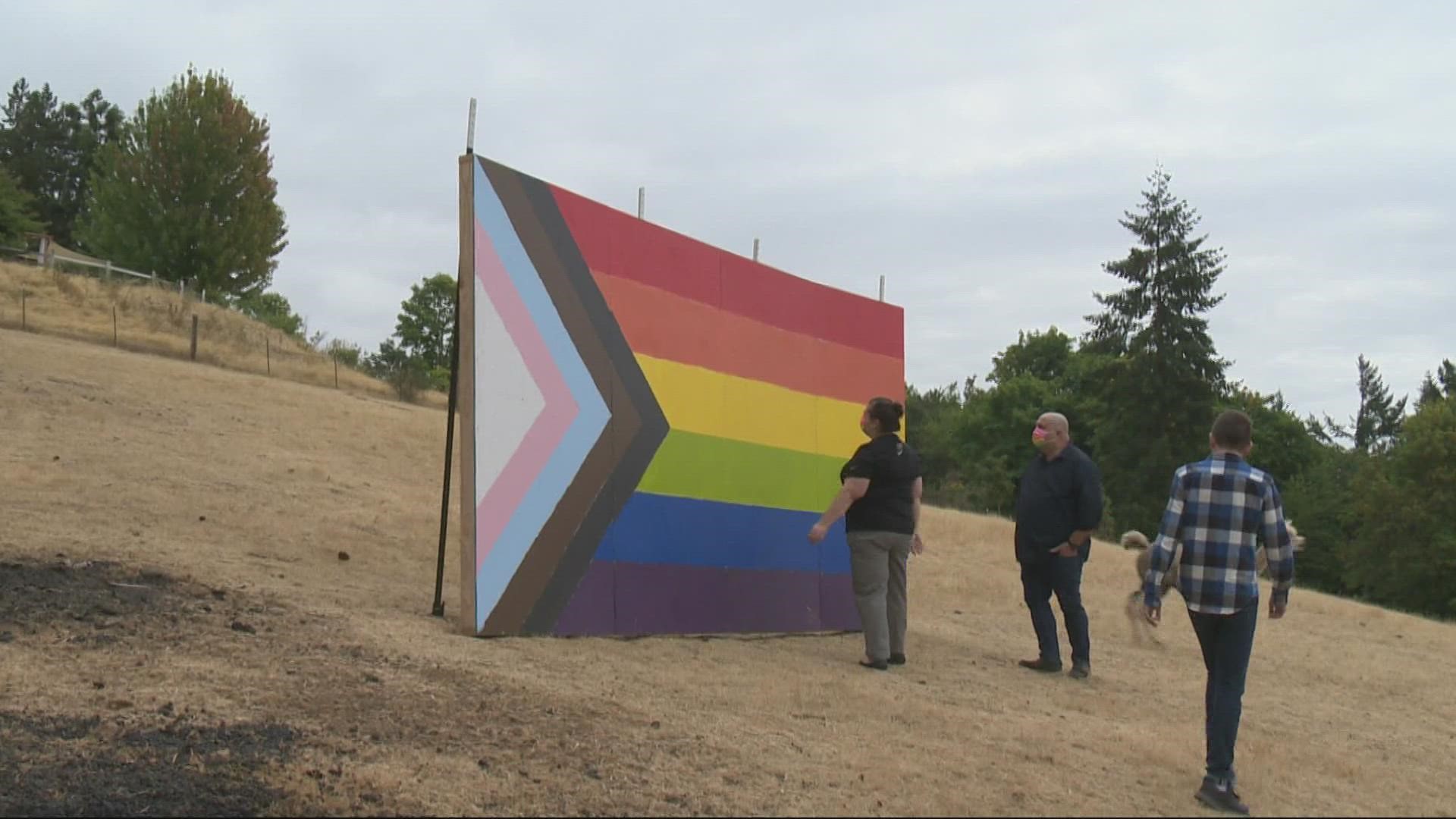 "We wanted maximum visibility," Erin McCarthy said. "The result is pretty amazing, we love it."

Erin and her husband Jaybill own a hillside farm in Newberg about a mile and half from Newberg High School. A clearing through the trees on their hill reveals the 17' by 30' painted plywood Pride Flag within view of the high school football field.

On Aug. 10, the school board voted 4-3 to ban Black Lives Matter and Pride flags.

"To get political symbols and divisive symbols out of our schools," argued vice chair Brian Shannon.

"'We're going to erase a bunch of people,' is what it felt like to me," Jaybill said.

The posts received hundreds of responses, with people donating money for materials.

On Sunday, a small group of strangers arrived to help the couple build and paint the flag.

"From all over," Erin described. "Someone from Forest Grove came, someone from Dundee came, people from Portland came..."

The Progress Pride flag, originally designed by an Oregonian, represents the LGBTQ community, with colors to also represent people of color.

The McCarthys argue symbols supporting these marginalized communities are not political.

"It's not expressing a Democratic idea or Republican idea or conservative or liberal," Erin said. "It's human beings."

Studies by the Trevor Project show lesbian, gay and bisexual youth are five times more likely than their straight peers to attempt suicide because of bullying and lack of support. That rate goes up for transgender youth.

Advocates for Pride and Black Lives Matter symbols in schools said the flags show another layer of support for marginalized groups.

In the 90s and 2000s, a man named Lon Mabon fought for Oregon Measure 9, which aimed to ban schools from even mentioned homosexuality, lumping it together with pedophilia.

Some in Newberg's School Board meeting made a similar argument against Pride flags, saying they show support for "deviants."

The McCarthy's completed flag is now visible to the many planes and hot air balloons that fly over the hill. The rooftop of their barn also has the word "LOVE" painted on a rainbow backdrop.

To LGBTQ and BIPOC youth in nearby schools, the couple wants to share a message that all colors belong in Newberg.

"You are not alone," Erin said. "Even though this is difficult there are people who are there for you."