'Dirty, out of control': Portland's cleaning more trash off the streets than ever, but you wouldn't know it

Requests to clean areas up and remove graffiti around the city are up more than 300% in the last year. 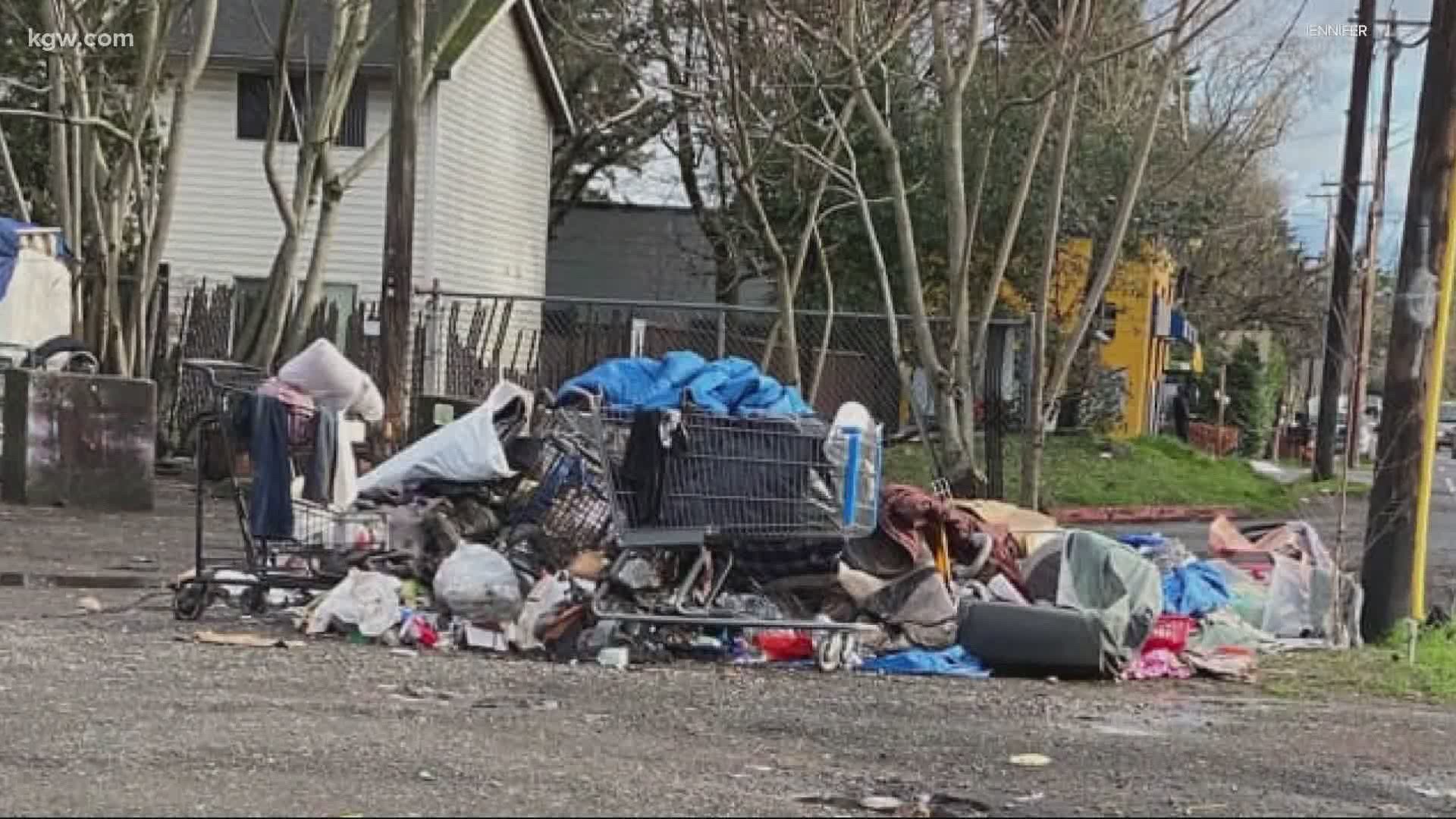 PORTLAND, Ore. — The city of Portland is on track to clean more garbage off the streets this fiscal year than it ever has before, but ask most Portlanders and they’ll tell you: it doesn’t look like it.

KGW put out a call on Facebook, asking Portlanders to pinpoint the areas that frustrate them most. Hundreds of responses poured in.

“Naito between the Tillicum Crossing and the Marriott ... all along SW 10th Ave. So many places. Around any church downtown,” wrote Susan, commenting on the post.

“Division Street & Powell Boulevard, 82nd Avenue, Johnson Creek corridor & bike path, I-205 bike trail, Foster Rd east of I-205,” wrote Emily. “My 6-year-old son said to me, “Mom, when I grow up and move into a tent.” He thought it was a right of passage/ normal transition into adulthood.”

“Where to begin. It is everywhere you go, can't escape it. Other cities are not like this,” wrote Debbi.

Stacey Gibson lives downtown and owns a Subway franchise on Southwest 6th Avenue. In an interview Thursday, she said she and her fellow business owners are hanging on by a thread because, she believes, any customers inclined to venture out during a pandemic are too intimidated by Portland’s optics to venture downtown.

“The quantity of trash that you're seeing around in the areas is a little bit alarming,” Gibson said. “You just have no idea where it's coming from, what's in there and what can be growing. I mean you know the rats, different things that happen.”

Specific to graffiti and vandalism, 73% say it's "very much" having an impact on business. Regarding overall cleanliness, 86% say downtown “needs improvement”.

Shouldn't it be easy?

While pandemic-specific data tied to just how much Portland’s housing crisis has grown in the last year isn’t available yet, the optics indicate homelessness has never been a bigger problem than it is now. In addition, months’ worth of racial justice and anti-police protests have produced graffiti and boarded up windows.

Gibson, and many who commented online, said it’s clear the protests and the housing crisis are complex issues that will take time to solve. Graffiti and trash, Gibson added, seem like they should be easier to fix.

“You would think it would be, yes,” she said. “Definitely.”

Daniel McArdle-Jaimes is the Strategic Communications Officer for the Office of Community & Civic Life, which cleans up graffiti in Portland.

He says requests for services have gone up more than 300% in the last year. Their budget has not. In fact, they're pretty much out of money.

“And we're only halfway through our fiscal year. And so what we have done for our budget requests for 2022 is, we have asked for half a million more dollars,” he said, citing a request that would double their current budget.

That will take months. In the meantime, the city is moving money from other programs to keep clean-ups going. They're hoping that tides them over.

“There is a priority in terms of how we go about doing this: small businesses, residences, as well as nonprofit organizations,” McArdle-Jaimes said.

Then there's the trash.

At the start of the pandemic, the city largely stopped clearing homeless camps, and officials have said, when camps stay put for longer, trash tends to pile up.

The city is starting to clear more camps now, and data shows, crews are cleaning up more trash than ever.

During the 2019-2020 fiscal year, crews contracted by the city cleared more than 3,200 tons of garbage off of Portland's streets. That's the largest total ever recorded.

About halfway into this fiscal year, crews have cleaned up nearly 1,800 tons of trash, meaning they're on track to surpass last year's number.

Still, based on surveys and social media, the increased spending and work is clearly not enough.

Mayor Ted Wheeler addressed the frustration at a news conference this week.

“I want to be clear this isn't just a downtown story. This is also the case throughout our neighborhood business districts and our industrial areas as well,” he said at a news conference Monday.

Speaking generally about livability issues, the mayor made two points.

First, he said, homelessness is a growing problem, exacerbated by job losses amid the pandemic. In response, the city has opened hundreds of shelter beds and multiple organized camps in the last year.

Second, the mayor argued, problems like trash and graffiti get worse when traditionally busy business districts are empty.

In other words, he believes, things will get better post-pandemic.

“We have to make sure that we get the vaccinations out that COVID is addressed. I've also been very clear that my top three priorities in this second term are safety, homelessness, and livability, all of which impact people's feelings about safety,” the Mayor said. “And I'm going to continue to focus on programming to address those issues.”

After KGW’s story first aired Jan. 29, dozens of Portlanders wrote in asking for information on how to volunteer to clean up trash in the city.

“We live downtown and are severely depressed about the trash, homelessness and boarded up businesses. What can we do? It's disgusting,” wrote a viewer named Jan. “I'm happy to help, just tell me where and what.”

One decades-old program holds hundreds of cleanups across Oregon each year, with an increasing number of them focused on the city of Portland.

SOLVE stands for "Stop Oregon Litter and Vandalism." It was founded in 1969 by then-Gov. Tom McCall. For decades, volunteers focused largely on cleaning up beaches and natural areas.

This month, the group has a list of cleanups scheduled, with one key one set for downtown Portland. The monthly downtown cleanup is scheduled for Feb. 24.

Volunteers must pre-register online. There is an attendance cap due to COVID-19.

People can also get SOLVE’s help organizing cleanups in areas of their choosing.

“It's nice that people want to get involved and we want people to get involved,” Carico said. “We all have the same frustrations. I mean I live in Portland, I experienced these same disappointments, but you know, it's a sign of our times right now, and we're just trying to do whatever piece that we can.”

RELATED: Dozens come out to pick up litter and 'Detrash Portland'