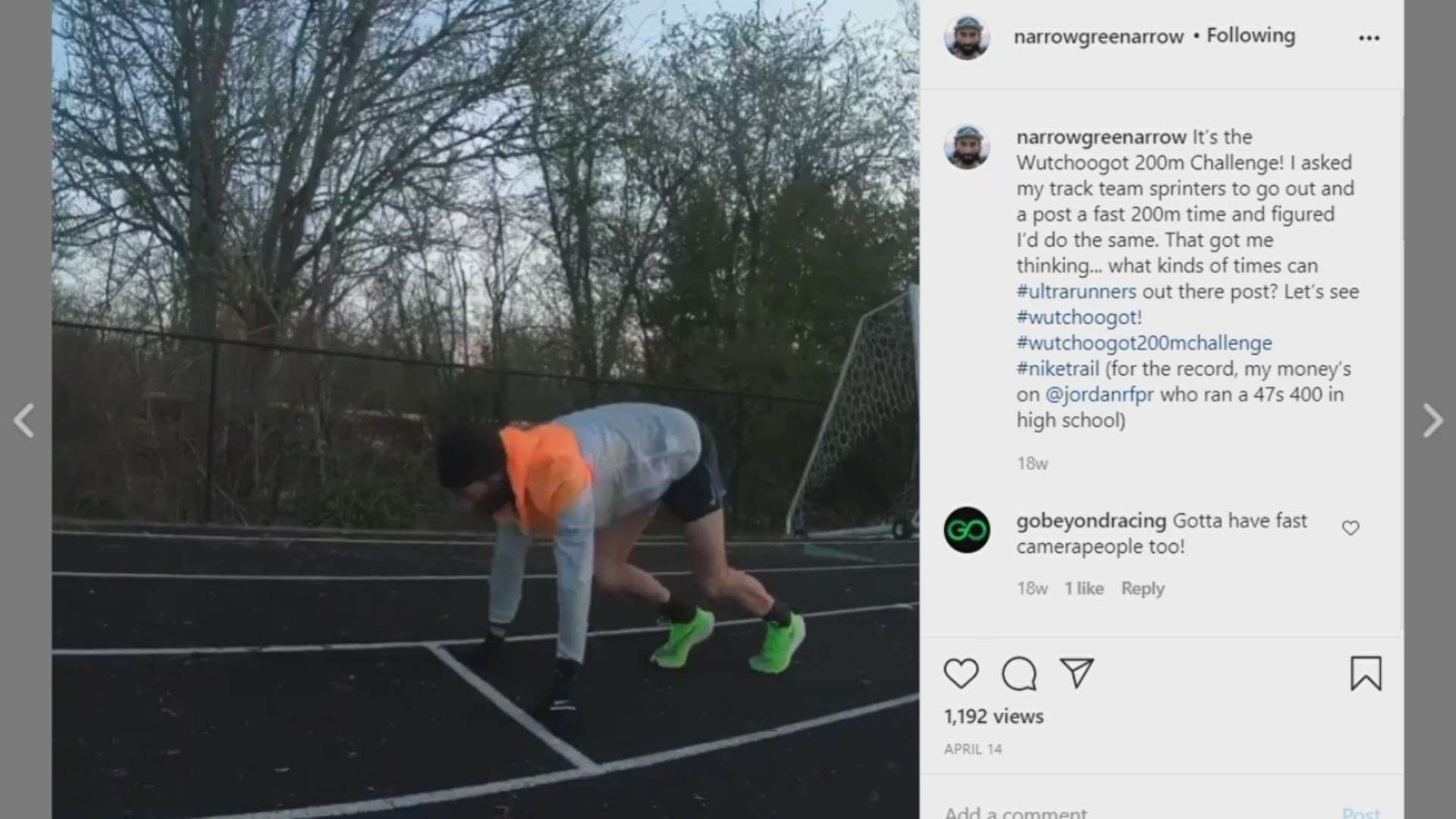 PORTLAND, Oregon — UPDATE: He did it! On Monday, August 24, Tyler Green ran the Wonderland Trail around Mount Rainier in 16 hours, 40 minutes and 31 seconds. That is now officially the new FKT (Fastest Known Time) for that route, cutting about 18 minutes off of the previous record (which had only been set five days earlier).

Tyler Green is a sixth grade health and wellness teacher at a boarding school in Portland. Soon, he'll be back in school year mode, living on campus and working full time. But for now, he's making the most of this summer, even when 2020 didn't go as he (or any of us) planned.

"Later on I found trail running and i was like, 'Oh this is it,'" said Green.

He's on the Nike Trail Running team with his wife, Rachel. Which means, yes, they do a lot of running up, down and around mountains.

"The ability to go to all these incredible places," said Tyler. "Just the ability to see so much in a day. To have a kind of feast of the senses, where you're experiencing so much in your body and in the fatigue but also in the sights and smells and sounds that you get to see throughout the day."

This year, Tyler had a lot of big running plans.

"I had a race in China in March that I was planning on going to that was canceled due to coronavirus really early," he said. "And since then everything’s been canceled ... So not just myself but most runners are looking at, 'Well, what can I do to challenge myself and do something that still scratches my competitive itch?' So FKTs is one of those things that people do."

FKT stands for Fastest Known Time. As in, the fastest time anyone has ever recorded completing something. There's an online database that tracks routes around the world, who's doing them and how fast they're doing it.

Tyler got his first FKT two years ago on the Timberline Trail that wraps around Mount Hood.

"I had a really amazing day. I mean I’ve been running since second grade and that was definitely my best run that I ever had," he said "So, I’ve owned that record for a couple years now."

Then when this summer came around and races were canceled, Tyler decided, why not try for two more FKTs? He started with the Loowit Trail around Mount St. Helens. And Tyler's fast friends had the same idea.

"My friend Dylan Bowman, he ran a record around the Loowit trail in 5:11, then my other friend ran it in 5:06, and then I brought the record down to six seconds under 5 hours," Tyler said.

That's around 30 miles in five hours. It definitely makes sense why that's the fastest anyone has ever recorded running the trail!

And that FKT - just a few weeks ago - was part of Tyler's training for his next attempt: The Wonderland Trail, which circumnavigates Mount Rainier.

It's 93 miles long, which is tough enough on its own. But then add in the vertical climb.

Sounds like something not many people would think to do, right?

But remember Tyler's friend, Dylan Bowman, that ran the Loowit Trail right before he did? Apparently he had the same idea for the Wonderland Trail, too. He ran it last Wednesday - really fast.

"He broke the record by an hour and a half," said Tyler. "A little bit unnerving for me knowing that the goal has shifted … It’s a scary goal, but I’m gonna go for it anyway."

So at around 5 a.m. on Monday, Tyler started running as fast as he can around Mount Rainier.

"Looping around a mountain, there’s something really special about that," he said before the run. "To look at a mountain and say, 'I went around that thing!' But then I think, also, if you’re familiar with the flow state, you try to find goals that match that skill level … I see Wonderland as being a very appropriate challenge for me and where I am athletically to where I can get into a space of deep focus and attention and have a really good day.”

He will have a crew to help get him what he needs at spots along the way, and friends to run with him for chunks of the 93 miles.

And while he is attempting a new fastest known time, that's not all it's about for him.

"In the FKT world, there’s success or failure, but in my sense of running and being a mountain athlete and loving the mountains," said Tyler. "The best day that I can have is a day where I’m going to test myself in a way where I can understand what I can do and who I am in a deeper sense than I did when I started the run."

And a day where he can have a little bit of fun too.

In a somewhat uncomfortable way -- and that's kind of the point.

"There’s something human about being uncomfortable that helps us grow, and I think maybe ultra runners want to experience that discomfort and that challenge," said Tyler. "You know while you’re in it you're like, 'I never wanna do this again,' and then there’s something about pain that’s such a short-term memory, where all of a sudden I’m fine with it and I’m ready to do it again."

His wife, Rachel, has a name for some of that discomfort: the pain cave. And Tyler knows he'll get familiar with that in the last few miles of this run.

Don't worry - getting ready for the Wonderland Trail did include some pre-run rest as well.

"The biggest thing about any training is that you need to recover," said Tyler. "So, the last two weeks have been pretty relaxed."

And he will definitely deserve a lot of relaxing then he completes the Wonderland Trail, no matter how fast he goes.

"[When I reach the end,] I know that there will be a deep appreciation for the friends that are out there with me, and a sense of relief as well," he said. "There’s a flood of emotions that happens in those final moments. And my experience of running the Timberline Trail, the last mile of running the Timberline Trail in record time was the easiest mile I’ve ever done. I looked at my watch and was like, 'I’m gonna do it' … Hopefully there’s that feeling as well, that sense of relief, and you get what I like to call 'finishers hope' in those final miles. Where something in you goes, 'You’re gonna be OK. Let your body do its thing, and you’re good to go.'"

Tyler is grateful that during this time in the world when so many activities are canceled, he and other runners can still do what they love to do.

"As far as athletics go, we feel very fortunate that we’re able to continue to do our sport and find a way to still practice it in a sort of different light," he said.

You can follow Tyler on Instagram @narrowgreenarrow to see all of his running adventures, and while he's running around Rainier, you can track his progress and see how fast he's moving along!

WATCH: This Portland man is attempting the Fastest Known Time around Mount Rainier

RELATED: Portland organization aims to keep girls active while empowering them this fall

RELATED: 'On Your Own' is the 2020 alternative to the Portland Marathon