Sec. Chad Wolf has been tweeting about "violent anarchists" in downtown Portland, and in recent days, the presence of federal officers downtown has ramped up. 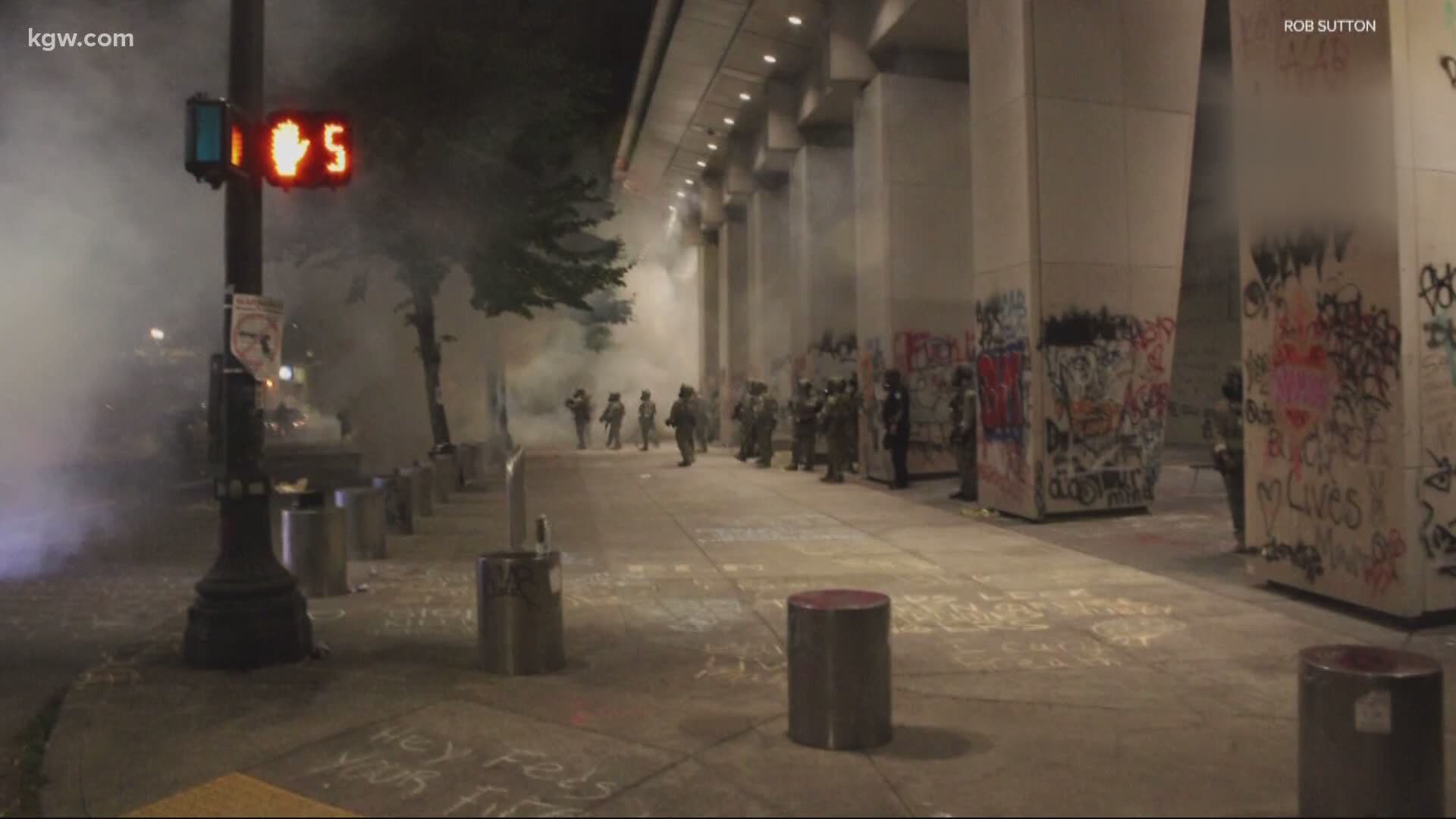 The purpose and schedule of Sec. Wolf's visit remains unknown, but he sent out a news release Thursday morning condemning "rampant, long-lasting violence" in Portland, complete with a timeline alleging violence by anarchists on Portland streets.

"This siege can end if state and local officials decide to take appropriate action instead of refusing to enforce the law. DHS will not abdicate its solemn duty to protect federal facilities and those within them. Again, I reiterate the Department’s offer to assist local and state leaders to bring an end to the violence perpetuated by anarchists,” Wolf said.

Around the same time Thursday, Portland police cleared dozens of protesters from Chapman Square Park and Lownsdale Square Park, and have put up fencing. Police say nine people were arrested.

The move follows more than six weeks of sustained nightly demonstrations outside of Portland's Multnomah County Justice Center and other downtown government buildings.

Portland Mayor Ted Wheeler, who also serves as the city's police commissioner, said Thursday afternoon he wishes DHS leadership wasn't in town and his office "hasn't been invited to meet with them, and if we were, we would decline."

Earlier in the week, Wheeler tweeted he had a phone conversation with Secretary Wolf. He said he wanted federal officers off Portland streets, and then "asked him to clean up the graffiti on local federal facilities."

Gov. Kate Brown called the president's actions "political theater," and added he is "looking for a confrontation in Oregon in hopes of winning political points in Ohio or Iowa." 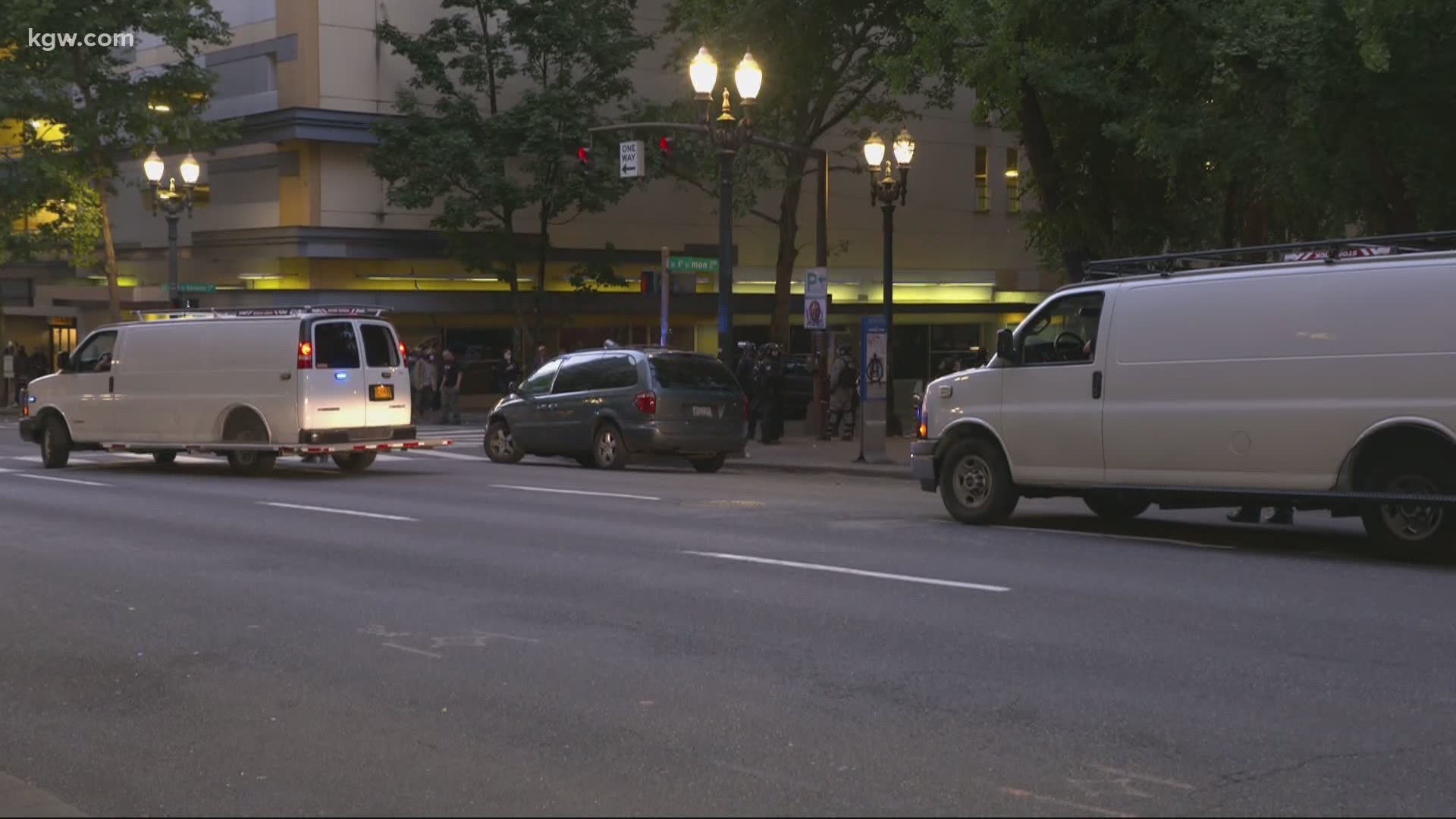 She also said she has asked Secretary Wolf to remove federal officers from Portland streets.

Multnomah County Sheriff Mike Reese tweeted on Thursday evening that he was invited to meet with Secretary Wolf but declined.

"I was under the impression this was going to be a thoughtful, honest and open discussion, but following statements made by Sec. Wolf, it became clear law enforcement in the City of Portland was becoming highly politicized, and for that reason, I declined to meet."

Reese said he values the relationship local law enforcement has with federal agencies but that the actions of "out-of-state federal agents last weekend failed to display good decision-making and sound tactical judgment."

Use of force by those federal officers was called into question last weekend, as a 26-year-old protester named Donavan LaBella was shot in the head with a crowd control device.

Video on social media from Tomas Morales IV shows LaBella was standing across the street from the federal courthouse when the incident happened. He had his arms raised above his head and was holding what looks like a large black speaker.

This appears to be the moment that #Portland protester was struck in the head and suffered a gruesome injury. pic.twitter.com/Na1h5BUaAO

The video shows a federal officer throwing a canister that lands near the man. He first tries to kick it away, then picks up the canister and tosses it back toward the courthouse.

He then raises the speaker above his head again, with both hands. He is wounded shortly afterward. You can hear the sound of the shot on video, and LaBella immediately falls to the ground.

Last week, Pres. Trump talked about deploying federal agents to Portland. At an event he told Sec. Wolf about the protests in Portland and claimed that local police couldn't manage the protests themselves.

"It was out of control, the locals couldn't handle it, and you people are handling it very nicely," said Pres. Trump.