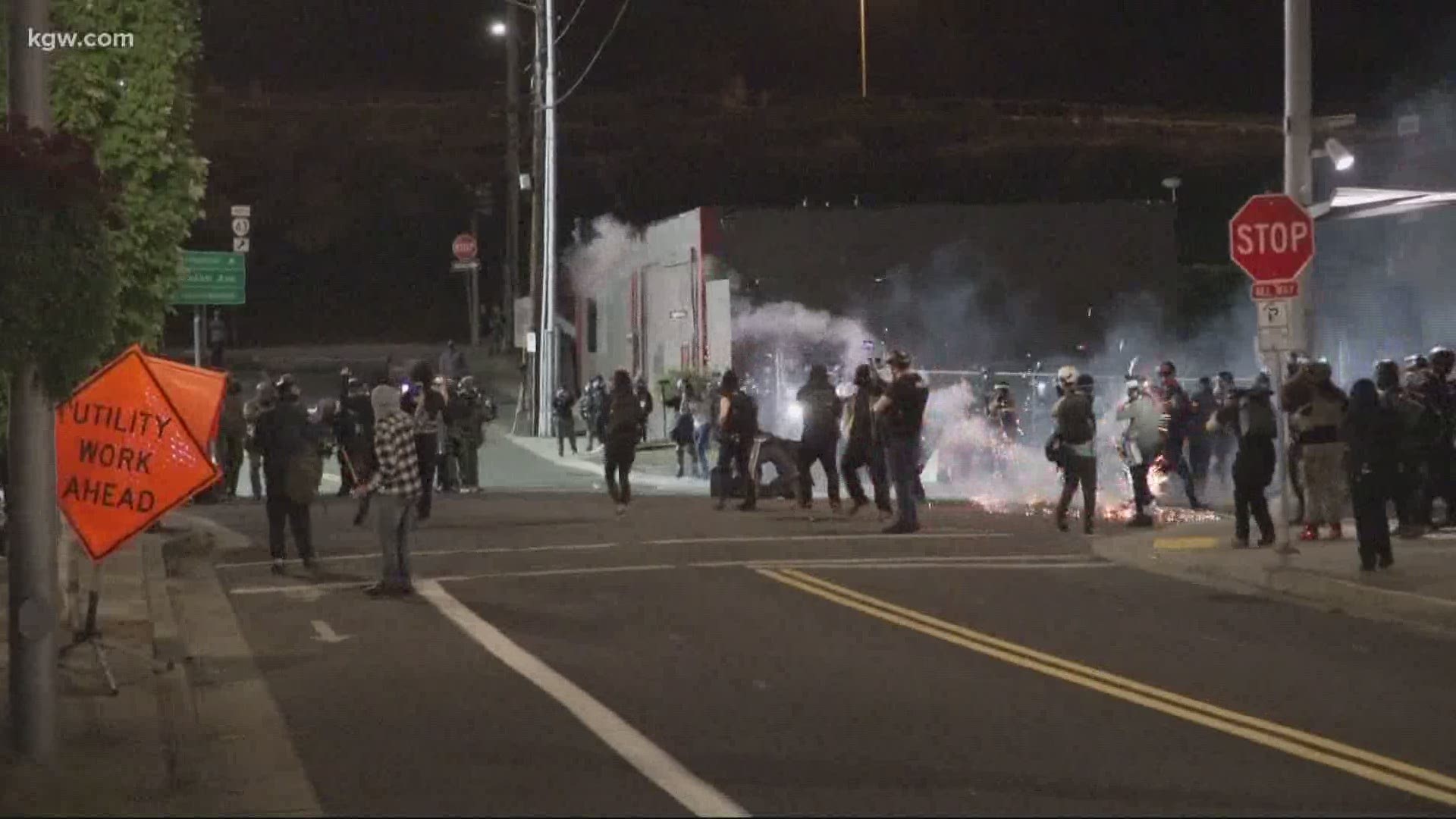 PORTLAND, Ore. — A group of protesters gathered outside the Immigration and Customs Enforcement (ICE) building in South Portland Thursday night. It's the second straight night protesters have targeted the building. A riot was declared Wednesday night.

“ICE will not stand by idly amidst an illegal riot targeting federal law enforcement officers and property. We will take all necessary measures to ensure the safety of our officers, and will vigorously pursue prosecution against anyone who puts them in harm’s way," said ICE spokesperson Tanya Román on Thursday.

Shortly before 11:30 p.m., Federal Protective Service (FPS) officers and some of the protesters, which were estimated to be less than 100, began to clash. Portland police say protesters threw rocks, bottles and fireworks at FPS officers.

Portland police say they declared the gathering an unlawful assembly at 12:21 a.m. because "the crowd blocked traffic, vandalized the ICE building, set fires to dumpsters, and threw projectiles at FPS officers." The crowd was warned to leave the area or be subjected to tear gas, crowd control munitions or impact weapons. Police say the crowd did not leave.

The group left the area by 2 a.m., according to Portland police.

Portland police say they arrested three people during the event at the ICE building:

On Wednesday night, protesters clashed with law enforcement, including ICE agents, in front of the building. At around 11 p.m., the gathering was deemed a riot.

Police said officers fired tear gas and other munitions at the crowd during dispersal efforts. Two people were arrested.

There were a few other demonstrations in Portland earlier Thursday night. A group marched from Kenton Park to the Portland Police Association building in North Portland. A third demonstration, a "Pop-up Protest Cinema 4 Black Lives," took place at Sellwood Park in Southeast Portland.

The date on the flyer is wrong and this is in fact tonight 8/20 at 8:15pm in Sellwood park. That's actually my neighborhood and this sounds interesting. I shall be there tonight. Hosted by @pdxdadpod! I'll probably post some footage this evening. https://t.co/zTMRZEJ980

This is the 12th straight week of nightly protests in Portland following the killing of George Floyd.

On Thursday afternoon, the Portland Police Bureau (PPB) sent out a timeline showing a snapshot of how every night has gone since May 29, which was the first night of mass demonstrations and ended with destruction in downtown and other parts of the city. Police declared a riot that night and have done so 15 more times over the past nearly three months.