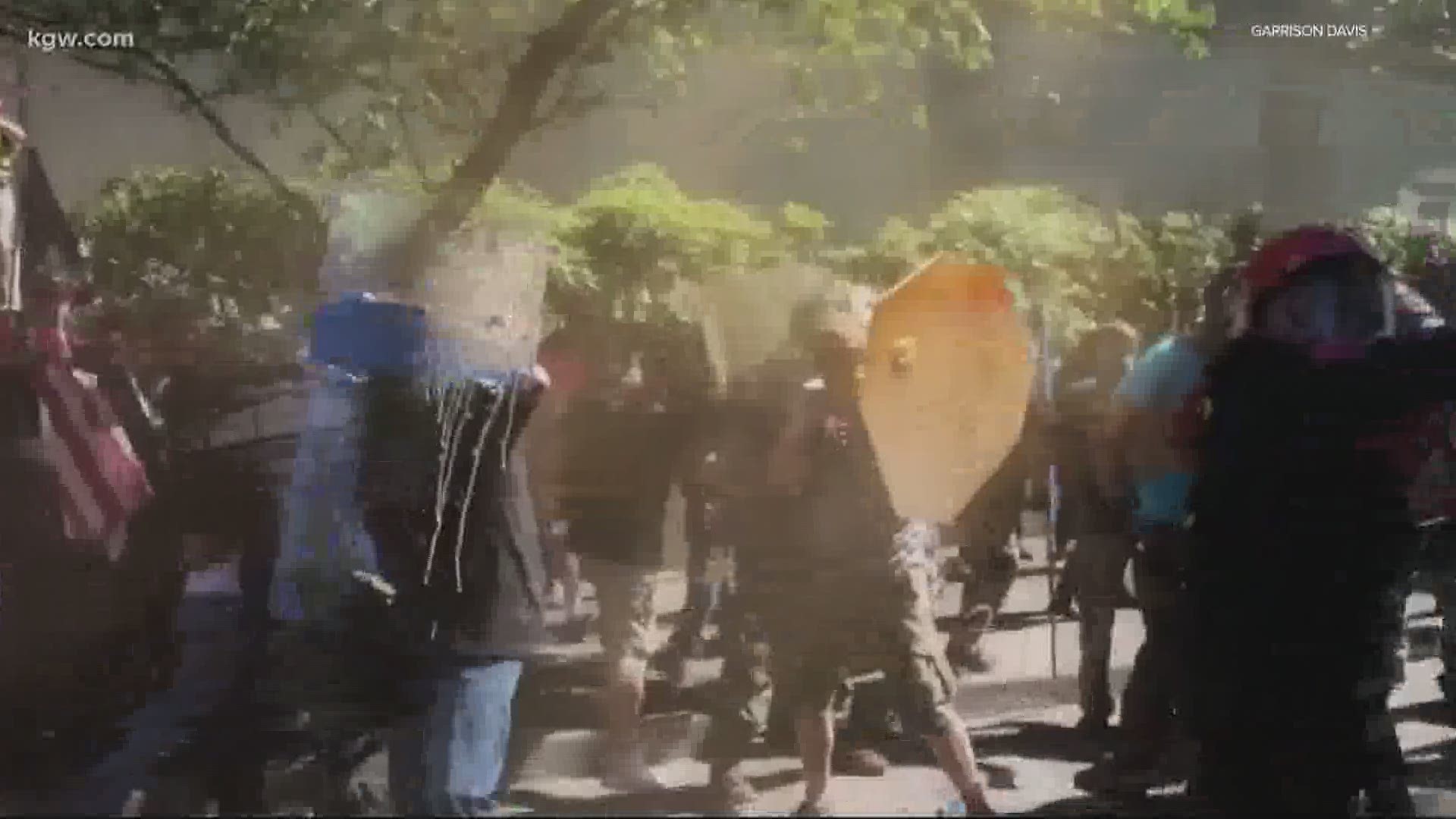 PORTLAND, Ore. — Protests in Portland have continued for the 13th straight week.

Since the death of George Floyd, demonstrators have taken to the streets to protest systemic racism, police brutality and a call to defund the Portland Police Department.

Saturday night, about 250 protesters gathered at Normandale Park in Portland before a "direct action march." The march, like those before it, calls for the complete abolition of police and prisons.

Journalists on the scene are reporting that Portland police will not let protesters cross in some areas.

Officers were stationed ahead of the march to prevent anyone from crossing over Interstate 84. However, officials said officers were getting set up on the Northeast 47th Avenue overpass when four vehicles approached the officers and refused to move. The officers had to set up their line right in front of the cars.

The police department said in a statement early Sunday morning, to prevent anyone from getting hurt due to the vehicles, "a sergeant deflated two tires on one of the vehicles. The other vehicles then complied with orders to leave."

At Northeast 47th Avenue, officers announced over the loudspeaker that the overpass was closed. At that time, people in the crowd threw rocks, eggs, glass bottles toward the officers, according to police.

The protesters then made their way to the Penumbra Kelly building and gathered on East Burnside Street around 10:45 p.m. on Saturday.

The Portland Police Department said in its statement that the Incident Commander tried to prevent protesters from marching to the Penumbra Kelly Building because it "has been the target of rioters on multiple occasions over the past few months, including assaults on officers, commercial grade fireworks detonated, fires set, threats to burn down the building, and vandalism."

Police said someone rolled a "mock guillotine with a stuffed bear into the street." Multiple U.S. flags and the bear were burned. Paint balloons were hurled at officers and green lasers were pointed at law enforcement.

The PPB declared the gathering at the Penumbra Kelly Building an unlawful assembly at about 11:40 p.m. Sunday. Everyone there was urged to leave the area and head west.

Police added that around 11:45 p.m., people "launched" items at officers and their cars at the building after trying to deescalate the situation. Police said one lieutenant was hit in the back of the head with a glass bottle and a medic was hit in the shin with a large rock.

Just before midnight, the Incident Commander for the PPB declared the situation at the Kelly building a riot after police say people threw rocks, bottles and other objects at officers.

Portland police said that anyone that didn't leave the area could be arrested or cited and police may use "crowd control agents, including but limited to tear gas and/or impact weapons."

Portland Police declare a riot at the Kelly Building. https://t.co/DsslZb1Fg7

It appears PPB has enough officers on duty to actively police tonight’s protest against racism and police brutality. Follow Cata for more! https://t.co/58H0qZLYDk

Some protesters left the area, however, police said about a dozen people walked back to the Kelly Building. Around 12:35 a.m. on Sunday, officers started to make arrests.

There was another push by officers to make the group leave the area, but the protesters went south on Southeast 47th Avenue to Southeast Stark Street.

Protesters then set traffic barricades, mattresses, a door, and other debris on fire.

The Portland Police Department said about 45 to 50 officers were pulled from other precincts to help respond to the protest.

Officers used smoke bombs, maces and other "crowd control munitions" to try and disperse the crowd. However, officials claimed no CS gas was deployed.

Just before 3 a.m., Portland Independent Documentarians captured video of a protester offering a can of Pepsi to officers in riot gear. It was a joke alluding to the pulled Pepsi commercial featuring Kendall Jenner in April of 2017. The ad received a lot of backlash as being "tone-deaf" and it appeared to trivialize protests for social justice cause.

A humorous moment from tonight: one protester offered a can of soda to officers as a funny homage to the controversial pepsi commercial. #PortlandProtests #PDXProtests #BlackLivesMatter pic.twitter.com/7jzDmpod7b

In total, there were 14 arrests made throughout the evening and all were booked into the Multnomah County Detention Center. Charges range from Interfering with a Peace Officer, Disorderly Conduct in the Second Degree, Riot, Resisting Arrest and others.

On Friday night, Portland Police declared a riot outside of its North Precinct where protesters gathered.

The group, estimated by reporters on the scene as about 200 people, first met at Irving Park and marched about a mile, through neighborhoods, to the precinct. Protesters are calling for the total abolition of police and prisons.

Just after 1 a.m. on Saturday, the Portland Police Department declared that the gathered in the area as part of a riot. The crowd was ordered to disperse by traveling south.

Anyone who did not follow the order could be "subject you to citation or arrest, and may subject you to the use of tear gas, crowd control agents, and or impact munitions," the police said.

Clashes between protesters and Portland police have occurred almost every night since the protests began. However, during violent clashes between members of alt-right groups and people downtown on Saturday afternoon, Portland police did not declare a riot, despite stating that the violence met the criteria.

In a release Portland Police Bureau said, in part, "There have been questions about why the events downtown were not declared a riot and why police did not intervene. Incident commanders have to weigh out the entire situation to determine if police action is likely to make things safer or not. In this case there were hundreds of individuals and many weapons within the groups and an extremely limited amount of police resources actually available to address such a crowd. Additionally, PPB members have been the focus of over 80 days of violent actions directed at the police, which is a major consideration for determining if police resources are necessary to interject between two groups with individuals who appear to be willingly engaging in physical confrontations for short durations.

While the activity in the group met the definition of a riot, PPB did not declare one because there were not adequate police resources available to address such a declaration. PPB had roughly 30 officers available for crowd management and there were several hundred individuals associated with the events downtown."