Federal officials issued an eviction notice on Monday for the protesters at a Portland ICE facility, six days after the office closed due to protests. 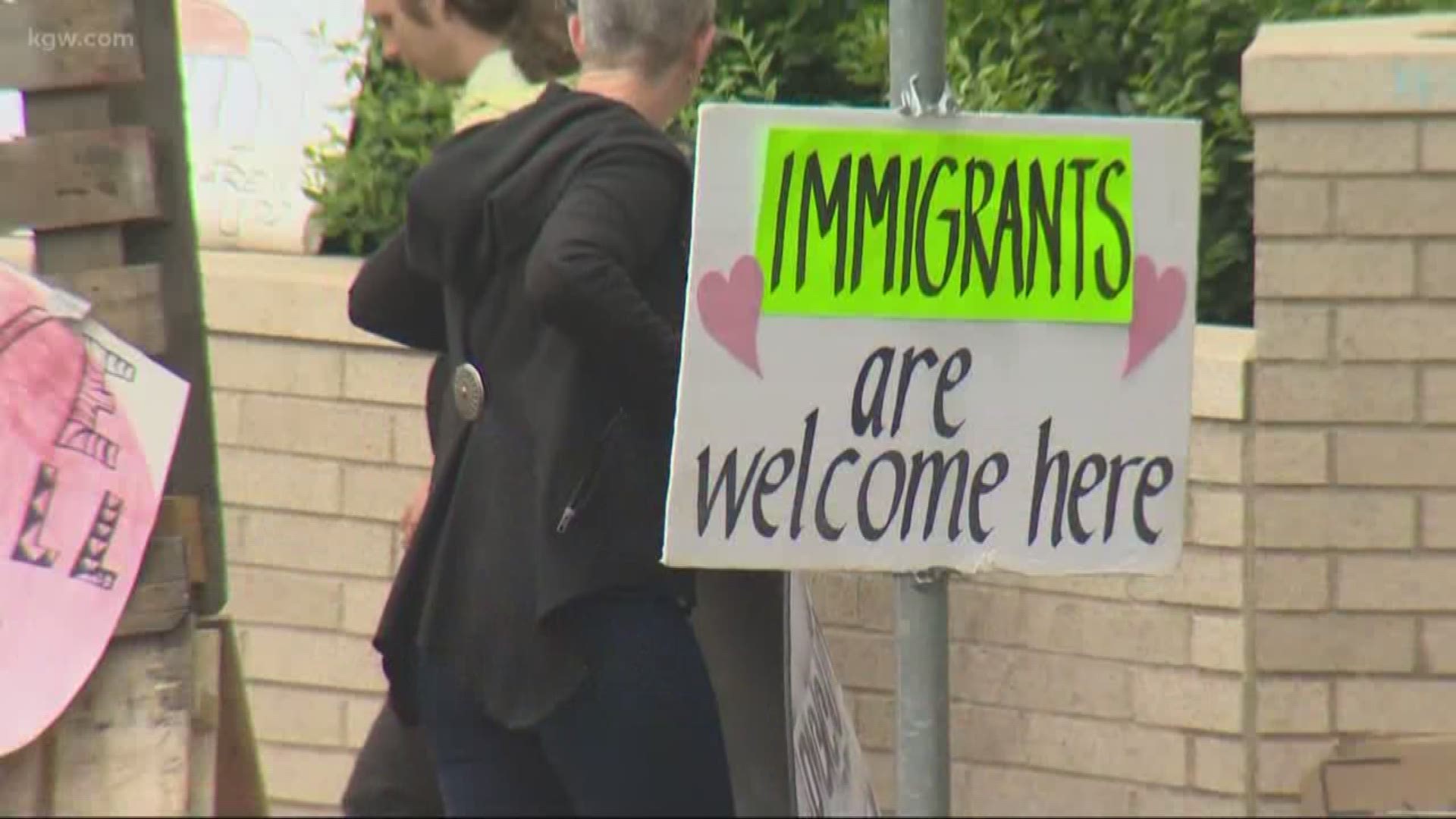 PORTLAND, Ore. — Officers from Homeland Security showed up Monday afternoon at a U.S. Immigration and Customs Enforcement facility in Portland to hand out fliers to protesters indicating they could face arrest if they continue to block the building's entrances.

The protesters responded by walking the officers out of the protest encampment while playing audio recordings of crying children separated from their families at the U.S.-Mexico border.

Wednesday marks the eighth day the Portland ICE office has closed amid protests at the federal facility.

Homeland Security Police just came back to deliver more fliers warning or arrest if protesters don’t allow access to ICE holding center driveway and doors. Protesters “walked” them out of the camp with recordings of the crying children separated at the border playing on speaker pic.twitter.com/U4HW8unH5S

"While demonstrators have a lawful right to assemble and voice their concerns, blocking the building’s driveways or entrances is not permitted under federal law,” said Billy J. Williams, U.S. Attorney for the District of Oregon.

A press release issued by Williams' office said protesters have the right to gather on non-federal property near the ICE facility.

In response to the first notice, Occupy ICE PDX protesters encouraged more people to join them.

"The bigger the crowd, the more attention is focused on this issue. If you can come and protest in person, please do," organizers said in a public document.

"A joint Department of Homeland Security team of law enforcement officers from the Federal Protection Service and Immigration and Customs Enforcement entered the federal building at 4310 SW Macadam Ave, to secure government property," federal officials said in a press release.

Protests against the Trump administration's recent policy of family separation and immigrant detention began at the Portland ICE facility on Tuesday, June 19. The facility closed the following day, citing security concerns. It remains closed to workers.

On Sunday, demonstrators protested peacefully at Portland City Hall to voice their opposition to the actions of ICE.

The group's Facebook page said it considers ICE's actions "unjust and find their continued operation to be unacceptable."

“I just feel that this is unconscionable, this is not who we are,” said protester Lauren, who asked only her first name be used.

“These policies are abhorrent, they're contrary to all the values we have as Americans,” said protester John Mulvey. “This is a nation of immigrants and it's disgraceful. I mean, people need to stand up.”

“For me it's a moral issue, not just because I come from an immigrant family — I grew up in a mixed status family — but also because if we look at history and what we're doing now to families, and how we're separating, and how we're criminalizing them, it's just morally unjust,” said Rep. Diego Hernandez. “People should just stand up because it's the right thing to do.”

Protesters said what is happening to families is unacceptable. Malstrom said she was a public health nurse for more than 30 years and saw firsthand what happens when children are separated from their parents.

“We know that when children are exposed to trauma, that even if the trauma resolves, all the rest of their lives they suffer adverse physical health, many, many years later,” Malstrom said.

Many agree it is time to reunite families.

After the speeches, the demonstrators returned to the ICE facility in Portland to continue occupying the building.

"We cannot allow these people to invade our country," Trump said.

Protesters say they plan to head back to the ICE facility to continue occupying it. pic.twitter.com/PouMeY4apC

RELATED: Portland ICE facility closed until 'there are no longer security concerns'