Former Chief Jami Resch announced she was stepping down as chief, but not leaving the police bureau, during a news conference on Monday. 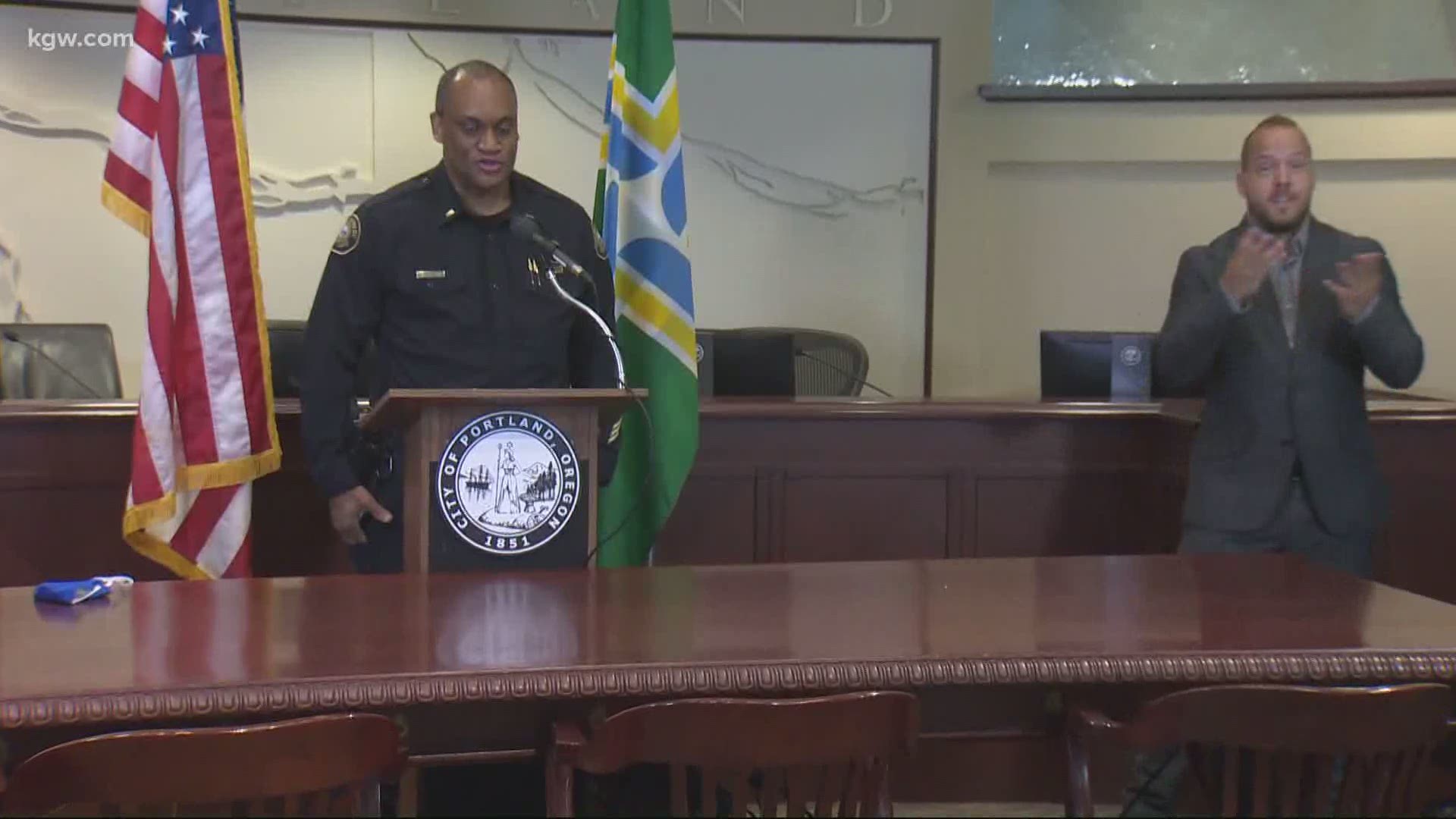 PORTLAND, Ore — Portland Police Chief Jami Resch announced Monday that she is stepping down, and she elevated Lt. Chuck Lovell to police chief.

"I'm a public servant. I'm going to show up every day with a servant's heart," said Chief Lovell during a brief speech at Monday's news conference. "All I can do is be me."

Mayor Ted Wheeler opened the news conference, which was billed as a reflection on the weekend's protests in Portland, with remarks about the need for reform and change.

“We must take actions that reimagine what community safety can be,” Wheeler said. "What PPB has not done publicly is stand up and say we will be the start of the change and take a step toward that change."

Wheeler, who is also police commissioner, pledged to reform and rebuild what public safety looks like in Portland. He said he plans to release a list of reforms he is pursuing on Tuesday.

"We must go through this process together," he said. "The issues we have are not the chief's alone to fix."

Former chief Resch said she personally asked Lovell, who is black, to lead the bureau.

"I believe change needs to start with change. I'm asking the members of the Portland Police Bureau to please trust me. This is the right thing to do,” said Resch, who noted that she will remain with the bureau in an unspecified role.

“Yesterday when I was talking to [Lovell] and explaining to him why I was making this decision, and why I felt he was the right person for the job, he made a very important statement. He said, 'I’ve never wanted to be in the role of a leader.' I said, 'that is exactly why you are the right person. You never wanted it. You were meant for it,'” said Resch.

Lovell spent time in the Air Force then nearly two decades working his way up in the Portland Police Bureau.

He’s run the human trafficking detail, been a volunteer for Lines for Life, worked as a crisis negotiator for 10 years and since 2017 has overseen the bureau’s community services division, which includes the behavioral health unit.

When asked if he would make changes to the bureau regarding the response to protests in Portland, Chief Lovell said he would take a look at what is needed.

"In very general terms, change is coming," he said.

One of those involved in the protests, Devin Boss with Rose City Justice, offered qualified optimism as reaction to the change at the top.

“I like the idea of having a black man with a history of engaging with and aiding all people within the community. However, I’m going to hold off celebrating until I see his actions in his new role," Boss said.

Several prominent black community leaders said at the news conference that Lovell is exactly what the city needs right now.

“This is historic. And for people watching, something is happening today. And I am so grateful for my brothers and sisters who are here today to be a witness to that and your support for Chuck,” said Antoinette Edwards, the former leader of Portland’s Office of Youth Violence Intervention.

"Chuck, it’s an honor to know you. I’m very proud that you are in this position. I know there will be stormy days but we will be right there with you,” said Ron Herndon, Albina Head Start Director.

“How can we give the community what it needs?” asked Herman Greene, a pastor in North Portland. “And right now today I’m hopeful because the community got what it needed. We didn’t need to look outside to find somebody to help us because everything we need is right in our community,” said Greene.

Lovell said the conversation with Resch on Sunday was a shock.

"It was a shock for me, but when your boss comes to you and says the community needs you, I felt like it was not the time to shrink and back down. Leadership is necessary right now," Lovell said. "If I can be a small way that the community feels some healing, I feel it’s my responsibility to do that.”

RELATED: 'This is the revolution part of it': Peaceful protest organizers in Portland working together to amplify message